Photo: Armco-Ferro-Mayflower House, ca. 1933, 251 Lake Front Drive, Beverly Shores, IN. The is one of five houses from the Home and Industrial Arts Group moved at the end of the fair by Robert Bartlett to his lakeside subdivision at Beverly Shores, Indiana. In addition, this was one of six houses at the fair using steel construction with standardized prefabricated parts. The house was essentially frameless and contained no rafters, studs or joists. In addition, the house was used to showcase porcelain enamel for house siding, a new use for a material that had been used for more utilitarian purposes such as bathroom fixtures and kitchen appliances. This porcelain enamel house can be viewed as the predecessor to Lustron homes, three of which are located at Beverly Shores. Part of the Beverly Shores Century of Progress Architectural District, listed on the National Register of Historic Places in 1986. Photographed by Jack E. Boucher, 1994, Historic American Buildings Survey [HABS IN-244], memory.loc.gov, accessed February, 2014. 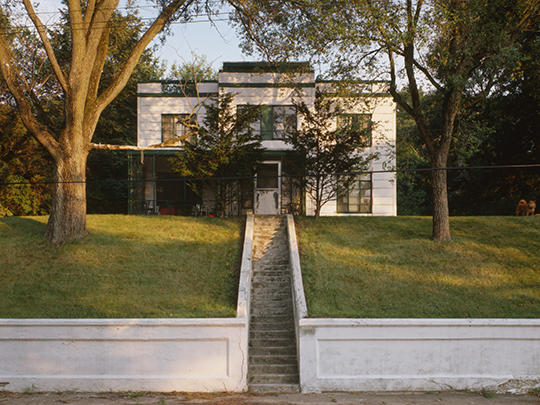 Beverly Shores owes its existence to land speculation activities during the 1920's. In May 1927, Chicago real estate developer Frederick H. Bartlett purchased 3,000 acres of lake front lands from the estates of local owners. The development, which included five miles of frontage on Lake Michigan, stretched from the western edge of Michigan City to the eastern boundaries of the Indiana Dunes State Park. Bartlett conceived of his new holdings as an urban resort community and during 1927 began selling property in the eastern half of his development extending from the La Porte-Porter county line westward to Lake Shore County Road. Most residents and prospective buyers rode the Chicago, South Shore and South Bend interurban to the Lakeshore train station at Central Avenue, now destroyed.

In the summer of 1929, the western portion of the development, extending from Lake Shore County Road to State Park Road, was opened for sales. A second train station was constructed on Broadway, north of U.S. Highway 12. Thousands of Chicagoans rode special excursion trains to Beverly Shores, where they were met by salesmen in private automobiles and given a tour of the community, served refreshments and encouraged to purchase one or more of the fifty-foot wide lots.

In 1933 Frederick H. Bartlett sold all of his northwest Indiana properties to his younger brother, Robert Bartlett. Robert touted the community and its attractions with the promotional flair of a born salesman. He constructed a school, a seasonal hotel with botanic gardens, a championship 18 hole golf course with clubhouse, a beach front casino, a riding academy and a theater. In 1935, Robert Bartlett purchased 16 structures from the 1933-34 "A Century of Progress", Chicago World's Fair and moved them to Beverly Shores [see: Century of Progress Historic District]. Four of the buildings from the Homes and Industrial Arts exhibit of the fair were barged across Lake Michigan and relocated to their permanent site on the lakefront. These houses include the House of Tomorrow, the Florida House, the Rostone House and the Armco-Ferro house. The Cypress Log Cabin was dismantled at the fair site and trucked to Beverly Shores. All five of these structures are located within the Indiana Dunes National Lakeshore. Currently, the Indiana Historic Landmarks Foundation leases four of the houses and is actively recruiting individuals to renovate the structures. The use of the fifth home is still governed by a time specific reservation of use agreement with the U.S. Department of Interior. The only other remaining World's Fair structure, the Old North Church replica, is a privately owned residence. The other ten structures are no longer standing. The totally renovated Beverly Shores train station, on the National Register of Historic Places, and the four miles of Lake Michigan beaches form the principal tourist attractions of the Town.

By 1946, the Robert Bartlett Realty Company had sold most of its property and moved on to concentrate on developments in suburban Chicago. It deeded the streets and six beach sections to the property owners, it also sold them the Administration Building and the hotel indoor parking garage. Complying with procedures governed by Indiana State statutes, a special census was conducted, the town divided into wards and an election for or against incorporation was held in December 1946. The community was incorporated as a State of Indiana town on January 1, 1947.

Though thousands bought lots, few built homes. The Depression and World War II impeded the community's growth. The lack of municipal water and sewer system also contributed to the Town's slow development. In the nineteen-fifties and sixties, a slow pattern of building began with about half of the residents living in Town on a full-time basis and the remainder owning summer homes.