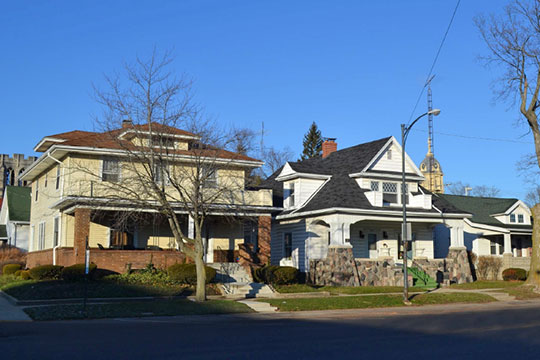 The Plymouth Northside Historic District was listed on the National Register of Historic Places in 2013. Portions of the content on this page were adapted from a copy of the original nomination document. [‡]

The Plymouth Northside Historic District was developed first as part of the original plat of the city of Plymouth and included the courthouse square. Its boundaries increased as residential development occurred north of the original plat during the early 1900s. The district is important architecturally for two reasons: 1) it has a broad inclusion of architectural types that include some from the earliest period of the city's development and 2) it has a variety of well-executed architectural styles that were popular during the period of development in the district.

The district's architecture represents some of the finest examples that were popular during the era of development. The district also has the distinction, though residential in nature, of having the courthouse square in its southern half. This was a design feature in the original plat of the city. The inclusion of this community planning feature allowed the influence of county government to be a part of the district's history which led to the designation of the Lincoln Highway through the district. Also a part of the district's history is the development of the city's first park; it is located on the east side of the district along the Yellow River. It is acutely linked to the city's early residents and was substantially developed further under the Work Progress Administration. A heavy influence in the district's history is the role religion played in establishing churches, parsonages, and educational buildings in the area.

The district's residential architecture is representative of several vernacular types from the Yankee tradition of building. The Gable-Front and American Foursquare design are the most prolific dwelling types found in the district. There are also several examples of the bungalow design. Fewer examples of the I-House, Upright-and-Wing, Hall and Parlor, Gabled-ell, and Pyramidal-Roof design are also found in the district.

Plymouth was platted in 1836 by William Polk, John Sering, and James Blair. Polk was the State Road Commissioner for the Michigan Road and lived in Fulton County during the road's construction in the 1830s. He believed that the location of the crossing of the Michigan Road at the Yellow River was a suitable location at which to establish a town. The original plat began near the north bank of the Yellow River (La Porte Street) and continued north to Harrison Street. Its east and west boundaries were Water Street (later Magnetic Parkway north of Jefferson Street) and Plum Street. The Plymouth Northside Historic District incorporates most of the northern two-thirds of the original plat of the town. The plat included lots dedicated for the use of a courthouse and seminary. A graded school was constructed on the seminary lot west of the downtown. The second and third county courthouses were constructed in the public courthouse square. The plat was a simple gridded plan with blocks approximately 264' square. The lots fronted the north/south streets in the plat except on the north and south sides of the courthouse square. To avoid views from the courthouse square down alleys that separated the blocks in a north/south division, the blocks on the north and south side of the square were turned so that the alleys divided the blocks to allow lots to front the courthouse square.

Whether intended or not, a strong division between commercial and civic uses developed in two corridors. Michigan Street clearly was the choice for commercial establishments; this was done to take advantage of travelers passing through the city on the Michigan Road. The road was the first north/south highway established by the state in 1829; it connected the Ohio River, Indianapolis, and Lake Michigan to promote trade and settlement in the north. Public buildings became relegated to the Center Street corridor, which the courthouse square fronted on its east side. From about 1840 through the 1950s construction of civic buildings along this corridor occurred with great regularity. The Methodists, Presbyterians, Episcopalians, Catholics, and German Lutherans established churches along the corridor during this period. The city established its first City Hall and Engine House on the corridor three blocks south of the courthouse in 1875 (extant). The Plymouth Carnegie Library and Post Office (extant) were also constructed three blocks south of the courthouse on Center Street in 1913 and 1935 respectively. The county established its first permanent jail on Center Street in 1879. St. Michael's parish constructed a new Catholic school (extant) on Center Street in 1954. While the Methodist and Presbyterian congregations moved from Center Street to other locations in the district, the other churches remain on the corridor and have active congregations. The city constructed a new fire department building during the 1970s; it is located a block south of the original building; it is also located on Center Street. The Carnegie library was demolished and a new library building was constructed in the same location in 1977. Center Street remains a civic corridor today while Michigan Street, south of Adams Street continues to be the historic commercial center of the city.

Very few of the original lots have not been subdivided. During a building boom at the end of the 1890s and well into the 1920s many of the originally platted lots in the district were divided in half to provide two 44' wide by 126' deep lots. This changed the character of the district to a more densely populated urban environment. A few blocks that front Michigan Street between Madison and Jackson Streets maintain their original lot boundaries. A few homes appear to be the first generation of homes constructed on lots in the original plat, though the lots themselves may be divided. These include homes at 523 North Walnut Street, 416 North Center Street, 701 North Michigan Street, and 508 North Plum Street.

Magnetic Park is another important aspect related to community planning in the district. The use of the site as a park, in conjunction with a mill and a flowing well, dates to the mid-1800s. The area's long history as a park provided the opportunity to develop further recreational opportunities in the area under the New Deal program of the 1930s. The development of the park included stonework, ponds, a well house, and a public clubhouse. The city also sought to be progressive when it developed a system of electric streetlights on Michigan Street at the turn of the century. The Michigan Street corridor is lit from the original south end of the city to the north end of city, except for a few blocks in the downtown, with the same historic lights. There are forty-two lights in the district, but combined with the Southside Historic District, there are nearly one hundred lights in the corridor. The city used the same lights when the Lincoln Park area was developed on the east side of town during the 1920s-1950s. The Michigan Street lights were installed by the Plymouth Electric Light Plant between about 1895 and 1905 and probably best represent a response by the community to the City Beautiful Movement that occurred at the turn of the century.