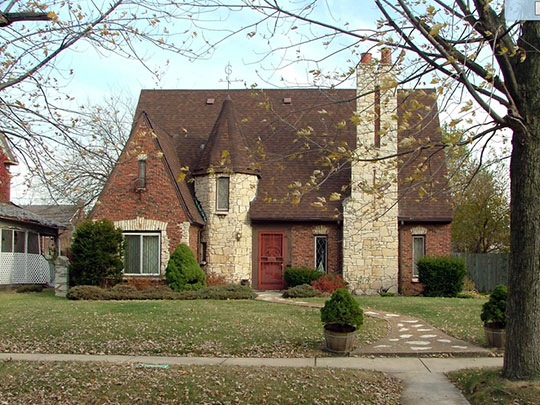 The Horace Mann Historic District was listed on the National Register of Historic Places in 2013. Portions of the content on this web page were adapted from a copy of the original nomination document. [‡]

The Horace Mann Historic District is an early automobile suburb of Gary. Many of the houses have garages to store the automobiles. Unfortunately the stand alone garages that exist within the district today have either been altered beyond their original appearance or have been replaced with a modern structure. The only garages that remain in their original condition are those attached to the house. Therefore the only garages discussed within this district are those that are an integral part of the main house structure.

The district developed primarily in the mid-1920s to the late 1930s, it finished filling in during the Post World War II decades; no new structures have been built within the district since the 1960s. The district contains many fine examples of homes designed in the popular styles of that period. Colonial Revival structures, full size houses and cottages, are the most prevalent with Tudor Revival and its close cousin the English Cottage being the next most predominant. There are a few examples of the Bungalow, the American Foursquare, Spanish Eclectic, Italianate and French Renaissance Revival scattered through the district. The scale of the homes throughout the district is relatively proportionate with the houses ranging from 5 to 10 rooms in their layout. The houses within the district display a high quality design and workmanship. Several of the homes were designed by prominent local architects, one is a plan that won second prize in the 1926 Chicago Tribune "Small House Contest," and at least one was designed by the American Small House Service Bureau. Several of the houses are similar to designs found in contemporary architect plan books available to the public in the 1920s and 1930s.

The average lot within the district is fifty feet in width and several of the homes occupy a lot-and-a-half up to three lots. This allows these homes to be placed along a common forty foot setback and still have enough exterior yard space to provide the neighborhood with an open appearance and individually frame each structure. Some of the individual houses have raised lawns that add to the appearance of the house. The plantings around the houses are reminiscent of the neighborhood during its era of significance with shrubs planted along the foundation lines, occasionally lining the sidewalks leading to the front doors. Sixth and Seventh Avenues take a curvilinear east-west route through the center of the district adding to the picturesqueness of the district.

The district today looks much as it would during the era in which it developed. Some of the houses have had some moderate remodeling over the years, and with the exception of a few, these alterations have been very considerate to the integrity of the structures. Only one house appears to have been removed.

The Horace Mann Historic District reflects the concepts of the Small House movement. The term small house is slightly deceiving creating a vision of bungalows and cottages. This is not totally wrong for these forms grew in their popularity during this time. The term is more reflective of the efficiency in their layout design. In the first few decades of the twentieth century the term "modern house" was used interchangeably with the term small house. This referred to the use of new technologies developed during this time making households more convenient to run. The older, larger houses had required a house staff to help the household function. Items such as the refrigerator, washing machine, and vacuum cleaner, all being developed around the turn of the century, made the operation of a household much easier for the home owner without the expense of a staff.