Photo: Looking northward along the houses on the western side of the 400 block of Polk Street in Gary, Indiana, United States. The houses pictured are part of the Polk Street Terraces Historic District. The Historic District was listed on the National Register of Historic Places in 2009. Photographed by User:Nyttend (own work), 2011, [cc0-by-1.0 (creativecommons.org/publicdomain/zero/1.0/deed.en], via Wikimedia Commons, accessed May, 2013. 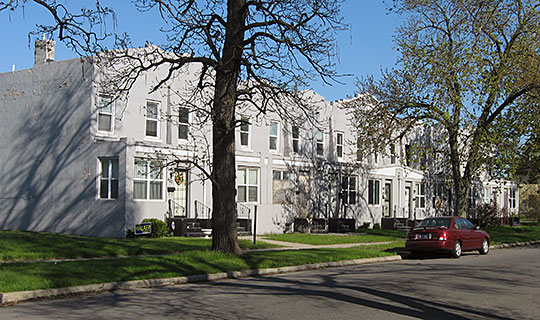 The area that present-day Gary encompasses was once originally comprised of a system of dunes and wetlands extending south from the lakeshore. The area was originally inhabited by members of the Potawatomi Indian tribe. Initially, the natural features of the area inhibited development. Early efforts to establish towns on or near the present site of Downtown Gary generally failed.

The extension of rail through the region in the 1850s and 1860s allowed the first permanent urban developments within Gary. The Town of Miller was founded in 1851 on the Michigan Southern Railroad. The Town of Tolleston was founded in 1857 on the Michigan Central Railroad. The presence of rail also fueled later land speculation. Although such speculation did not create significant development, it set the stage for the creation of Gary in the next century. In 1906, U.S. Steel purchased a large tract of land along Lake Michigan to build a steel mill, recognizing the region's relation to urban centers and access to both land and water transportation. In doing so, it continued Northwest Indiana's industrial trend that had already occurred in Whiting and East Chicago.

U.S. Steel also laid the foundation for residential and commercial development in the City by creating the Gary Land Company, which established the first subdivision around what is now Downtown. Outside of this area, the community grew haphazardly. Development quickly spread south along Broadway onto land not controlled by the Gary Land Company, leading to speculation and uncontrolled growth in what is known as the "Patch." These areas lacked access to basic infrastructure, such as sewer, water, and gas lines, and often included poorly constructed buildings. The lack of planning in the early development of Gary manifested itself in residential neighborhoods close to heavy industry, heavy rail, and industrial traffic, as well as in the industrial domination of much of the lakeshore.

During the first half of the 20th Century, Gary experienced periods of rapid growth. Within four years of its creation, it had a population of 17,000 residents, a post office, a city hall, and a school. The municipality of Clark, surrounding the present-day site of Clark Station, was annexed in 1907; Tolleston was annexed in 1910 and Miller was annexed in 1918. By 1920, the population had grown to 52,000. By 1930, the population had grown to 101,000. Gary's industrial base attracted a diverse population. In addition to a large number of eastern European immigrants, African-Americans and Hispanics were both present in large numbers from the beginning. During the 1920s, Hispanics represented the second-largest ethnic group in Gary, after Poles. African-Americans began to move to Gary in significant numbers during World War I.