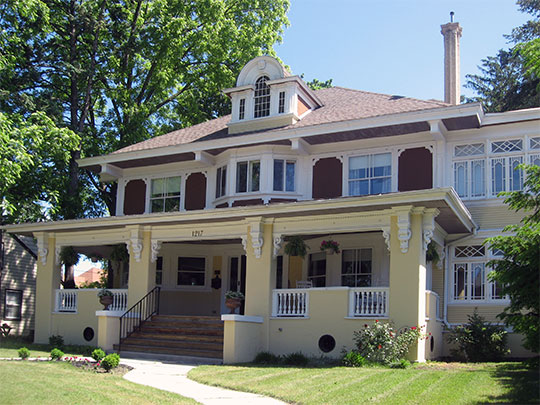 La Porte, seat of La Porte County, is a pleasant, bustling manufacturing city, surprisingly clean for an industrial center. The red sandstone tower of the La Porte County Courthouse rises above the public square, surrounded on all sided by wide, shaded residential streets. Nine lakes are clustered to the north and west of the town, two of them within the city limits.

La Porte has played a prominent part in the development of industry, agriculture and transportation in northern Indiana. It was founded in 1830, at the time when the Michigan Road was being built. Situated at a point where the great forests of early Indiana met the open prairies of the north, it was called La Porte (French, for 'the door') by the early French settlers. Through La Porte passed all the commerce between central and southern Indiana and the lake regions of Indiana, Illinois and Michigan.

The diversity of La Porte's manufactured products is unusual for so small a city. Steel-tube furniture, florists' supplies, boilers, lingerie, pianos, conveyors, farm implements, saxophones, meat-slicing machines, cough drops and baby carriages are among the products of the city's 37 industries which employ about 3,500 workers.