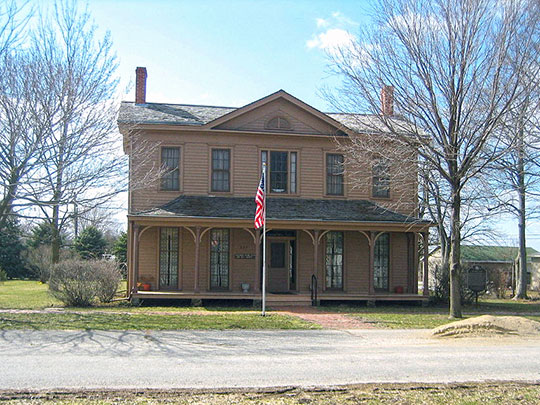 The Kickapoo Indians were the first recorded people to have inhabited the Chenoa area. The tribe traded and interacted with the Pottawottamies who had camps near modern day LeRoy but often frequented the Rooks Creek area. By 1828, the Kickapoo had established significant encampments near what was known as Indian Grove in Livingston County. It is estimated the tribe numbered over 600 people.

Around this same time, Christian missionaries were beginning to arrive in the area and converted several of the Kickapoo to Christianity. European settlers did not begin to appear on the scene until the late 1840's and early 1850's. In 1852, a native Kentuckian and land speculator, Matthew T. Scott, became interested in land holdings in Ohio and Illinois. Scott was a businessman of some note who was involved in lumber and mineral development as well as agricultural ventures in the Chenoa area. Around 1852, Scott purchased close to 16,000 acres of land for family members and himself. Much of this land was later used for agricultural pursuits.

He is also given credit for establishing the first train station in the area. Chenoa was first known as "Peoria Junction" among railroad officials and traders. It was Scott who originally applied to the government to name the city "Chenowa," the Indian spelling for Kentucky. After filing legal papers for the new community, the government office left off the letter "w" in the official filing spelling, thus the name, Chenoa. Although he protested, Scott was never able to get the government to change the spelling of the name of the city.

Chenoa Township was organized in 1858. It contained almost twice the area that makes up present-day Chenoa. It included Yates Township until 1863. The city of Chenoa was built on land within Chenoa Township. Nearly all the settlers were involved in agriculture, raising corn, grasses, small grains and fruits. In later years, area farmers added oats, soybeans, hay, clover and alfalfa as crops.

During unusually wet growing seasons, farmers depended on livestock to make a living. These included hogs, cattle and sheep. Land ownership was the exception rather than the rule for those who worked the land. A great majority of the local property remained in the ownership of a few who hired others to farm it. The Scott family and their partners owned several thousand acres of farmland in the area. The land that was not owned by Scott and his benefactors often had contractual stipulations attached to it allowing Scott's business partners to determine land use.

Early pioneers that populated Chenoa came from New England, Pennsylvania, New York, Kentucky and Ohio. Later an influx of immigrants from Germany and Ireland also began to populate the area.

Scott is credited for positioning Chenoa to take advantage of the railroad. Scott conceived placing portions of Chenoa in or near the site planned for the Chicago and Alton rail line which was eventually constructed in 1854. He platted blocks and streets for the new city for this purpose. He put his trust in the hope that future settlers and traders would build up the town and its future economy.

Around 1853, J.B. Lenney of Pennsylvania and his brother-in-law John Bush, Jr. came to the area to erect a building for a shop and store so they could commence business about the same time the railroad was scheduled to begin operations. The business was later named the "Farmer's Store" and is believed to be the first building erected in the city of Chenoa. The National Hotel was soon built in 1856 by John M. Bryant. Hotel business was vibrant since Chenoa was the only operational railroad route for Peoria and all points west to Springfield and St. Louis. That same year, Chenoa established its first post office. Lenney was also named the first postmaster. The first schoolhouse in Chenoa was erected about this time. Named the Anderson Schoolhouse, it was built on what became known as Crittendon Street. Chenoa was incorporated in 1868 under the Princeton Charter. This charter was granted by the Illinois State Legislature and forbade Chenoa the right to acquire a license to allow the sale of alcoholic beverages in its city limits. Limitations were put on Chenoa since the legislature was concerned that too many surrounding communities already sold alcoholic beverages. In 1872, an election was called to formulate a government for the city. J.R. Snyder was elected as the first mayor under city incorporation. The city was divided into three wards with two aldermen being elected from each ward. Around this same time, some of the first trees in Chenoa were planted, compliments of the Scott & Maxwell Nursery. Many soft maples and box elders were placed in the area known as Piety Hill.

As the railroads took hold, Chenoa became a city where significant trade took place. This in turn allowed the city to prosper. By 1879, there were 12 miles of boardwalks in front of houses and businesses. Brick walkways were added some ten years later. Dirt roads would soon be upgraded to accommodate more modern concepts of transportation, including the automobile.

Other important occurrences before the turn of the century included the development of the Chenoa Water Works in 1895. A great fire had virtually wiped out the business district only months before in 1894. Typhoid fever had become an epidemic in many parts of the country, due mainly to public water contamination. In June of 1895, the first water tower was erected near the city park. Soon after, the first pump house was built near the train depot. During this same time period, the first city hall building was constructed on Weir Street. It served citizens at this location for 60 years.

The first Chenoa Fire Department was formed around 1894. It was entirely volunteer and consisted of bucket brigades. At one time, there were close to 40 members of the department. At first, fire equipment consisted of carts that could hold water for the bucket brigade. After the establishment of the Chenoa Water Works, water mains and fire hydrants took the place of these brigades, improving the fire fighting capability of the fire department. The State Bank of Chenoa was organized in July of 1892 and opened for business on the southeast corner of Green and Owlsley Streets. The bank had capital of $30,000 and close to 40 stockholders. Through the years it has changed its name frequently under a variety of ownership arrangements.

Chenoa Community Grade School was built in 1911 at a cost of $40,000. It accommodated both grade and high school students. The high school rented space from the grade school. In 1920, a community high school district was organized. L.C. Smith was named its first superintendent. The high school built its first building in 1936 with monetary assistance from the federal government.

Transportation arteries were also being improved in and around the city. Dirt roads were no longer an option due to the dust in the dry season and the mud and ruts that would occur on roads when in use during wet periods of weather. Chenoa paved many of its roads between 1915 and 1919 which further enhanced it as a trading center. In 1920, State Highway 8 became U.S. Route 66. Route 66 would later be developed into a major cross-country transportation artery. In 1924, U.S. State Highway 4 was renamed U.S. Highway 24. These roads were paved like many others across the country encouraging an upswing of motor vehicle traffic in the early 1900's. Although churches were present throughout Chenoa's early history, many denominations began to gain a foothold in Chenoa during the early 1900's. Methodists, Catholics, Presbyterians, Baptists, Congregationalists, Mennonites, Episcopalians, Nazarenes, German Baptists, Christians and Lutherans all had established churches in Chenoa during this time period.

The Mennonite Old Peoples Home was founded in 1919 in the nearby Village of Meadows. A 13-acre site in the central part of the village was chosen. Ground was broken in 1922 and the home was completed and dedicated in May of 1923. Additions and expansions to the home were later made in 1947 and again in 1951. Today the home serves over 100 people and is operated as a not-for-profit organization.

The Ritz Theater was the first motion picture theater in Chenoa. Opening in 1909, it was initially owned and operated by the Dexter and Clagget families of Lexington and featured silent pictures. The modern version of the theater was opened in February of 1938 under the management of Elmer Larsen.

The Chenoa Milling Company began operations in 1926 under the leadership of Ray Morris. It began as a feed grinding operation for farmers. In 1939, work began on constructing new quarters for the mill two blocks east of the business district. The company later produced and sold livestock feed, phosphate and fertilizer.

After World War II, local farmer Alvin Dameron of Yates Township purchased a surplus army plane for personal use. His purchase sparked interest from other farmers in the area who also purchased aircraft. This group became known as the Flying Farmers and was the initiative behind the formation of the Chenoa Flying Club in 1947. That same summer, Howard and Harry Pick built a turf airfield and a hangar on their property just southwest of Chenoa. The airfield was part of the Chenoa area for several years.