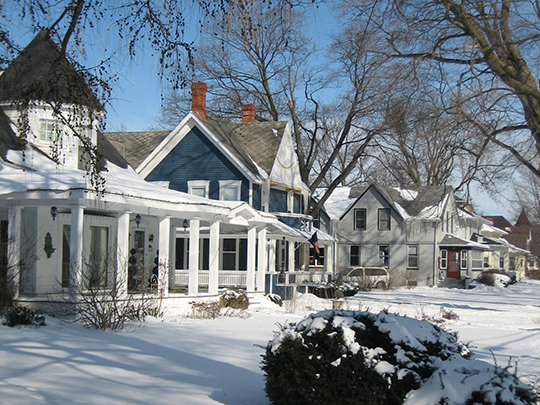 The Sycamore Historic District was listed on the National Register of Historic Places in 1978. Portions of the content of this web page were adapted from a copy of the original nomination document. [‡]

The Sycamore Historic District is a relatively narrow strip along the town's north-south axis and is generally confined to Main and Somonauk, the town's most prestigious streets, and immediately adjacent streets.

The land use within the District conforms to the norm of small Illinois county seats, with governmental and commercial uses concentrated together and surrounded by residential neighborhoods. There are no industrial uses within the District, little vacant land, and the only Federal property seems to be the post office at State and Main. Religious, cultural and social uses are scattered throughout the district.

Since almost all residential structures are single-family and detached, residential density in the District is quite moderate. What little variation there is results from lot size, particularly the two very large lots on North Main. Construction is almost equally divided between masonry and frame and the vast majority of structures are 2 or 2-1/2 stories in height.

The oldest structures in the District date from well before the Civil War and are Greek Revival in style. Since a major period of Sycamore's growth occurred after that conflict, the Italianate is present both in quantity and significance. Classical Revival styles are found in a number of public and commercial buildings, specifically the Courthouse, Public Library, U.S. Post Office, Sycamore Bank and the Pierce Building at Somonauk and State.

Sycamore is one of a group of small Illinois county seats that have survived the vicissitudes of the 20th century with both the fabric and the sense of their earlier history virtually intact. Sycamore conveys a gracious calm very close to the popular American image of the ideal small town, particularly on Somonauk and Main streets. This is in no small part due to the architectural merits of individual buildings; fine examples of the Italianate and Queen Anne, but even more so the result of the total ensemble. In this, substantial old houses, their relationships one to the other and to the whole, trees, quiet streets and excellent churches work in concert to create that feeling of beauteous calm, punctuated by the outstanding individuals as by exclamation points.

Sycamore's history is one of orderly settlement, growth and development that verges on the purely uneventful. The first settler, Carlos Lattin, arrived in 1835 and located mainly north of the Kishwaukee River (and of the present town) and land laid out as a town the following year by a wealthy New Yorker, Christian Sharer, and his associates. Despite the damming of the Kishwaukee and erection of a mill, the town did not succeed until 1837. The county seat was moved here from Orange and was laid out by Evans Wharry and James Waterman.

Sycamore was never a manufacturing center of any great significance, but has long had an adequate industrial base. Its early industries included Marsh Harvester Manufacturing (1869), R. Ellwood Manufacturing (1895) and the Sycamore Preserve Works (1881).