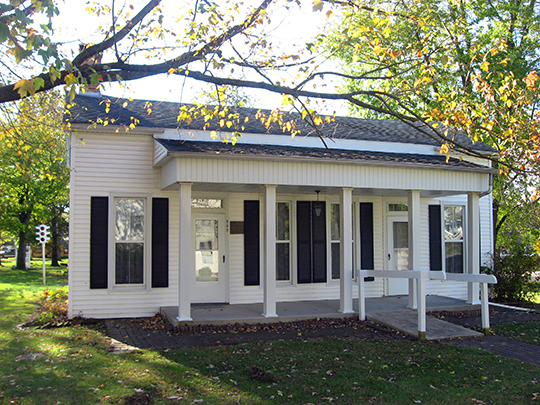 Situated on the eastern boundary of Illinois near the Indiana state line and about 200 miles south of Chicago, Marshall is a small community of about 3800 and is the seat of Clark County. Founded and platted on October 3, 1835 by the owners and purchasers of the land, Colonel William B. Archer and Joseph Duncan, the settlement was named after the recently deceased Chief Justice John Marshall. The settlement was one of many platted due to the National Road. Understanding its importance to westward expansion, Archer and Duncan platted Marshall relative to the National Road and not on the axis of the existing north and south road from Chicago.

The National Road, also known as the Cumberland Road or Trail, was surveyed in Clark County, Illinois, during 1828 and traversed the county by 1834. The National Road, the United States' first federal highway, was the vision of George Washington and Thomas Jefferson who believed that a trans-Appalachian land link was needed to unify the early expanding republic. In 1806, Congress authorized construction of a federally funded road beginning in Cumberland, Maryland and terminating at the Ohio River. As territories in the west became states with new settlements, the National Road was extended to reach the Mississippi River. In its full scope, the National Road traversed from Maryland through Pennsylvania, present day West Virginia, Ohio, Indiana, and Illinois. Construction of the road had its periodic stops and starts; however, it eventually made its way to Illinois. A financial panic in 1837 caused funding for the road to cease, thus construction terminated in Vandalia, the state capital of Illinois at the time. However, even with its construction difficulties, the National Road was a main thoroughfare used by westward travelers and also created a connection to the east for the trade of goods.

Strategically located just west of Terre Haute, Indiana and the Wabash River, Marshall was well positioned to welcome travelers. While agriculture was the early economic basis of the settlement, Marshall grew due to the National Road. The first few years of Marshall saw the construction of about 15 to 30 buildings to house the businesses that would serve settlers traveling west. While it was important to have services available for travelers, Archer also understood the need to attract settlers for Marshall. As people and families were traveling through, Archer was known to approach these individuals, convincing them to remain. He was successful, specifically with those who could assist in construction such as carpenters and bricklayers. As early as 1836, a hotel, tailor, and mill were established; by 1838 a doctor and school were in operation, all of which served to solidify a more permanent settlement. When Archer and Duncan platted Marshall, specific lots were reserved along the National Road, indicating their thoughts of where the town's business center would likely develop. The majority of the lots fronted the National Road and created what would become Marshall's Main Street (now Archer Avenue) and a thriving business district. Due to its services and the steady influx of travelers and settlers, Marshall was beginning to be favored over other established communities in Clark County.

At the time Marshall was founded, the county seat was in Darwin, a few miles southeast of Marshall along the Wabash River. Darwin was a small community, but very established due to the traffic on the river. However, with new settlements and community centers forming along the National Road, the people of Clark County thought Darwin was too remote for the county seat and in 1835 began petitioning for its removal. The petition went to the state legislature during the 1835-1836 session, however an agreement could not be reached as to where the new county seat should be located. In 1836, a petition was started again with the stipulation that a new location was to be chosen by the county's inhabitants. Two towns were selected as ideal locations, Auburn and Marshall. According to the History of Crawford and Clark Counties, the debates that ensued were not over the politics of having such a distinction, but rather about the "... geographical location ... and of personal and private interest." In the fall of 1837, a majority vote won Marshall the election for county seat, which was officially moved in June 1838.