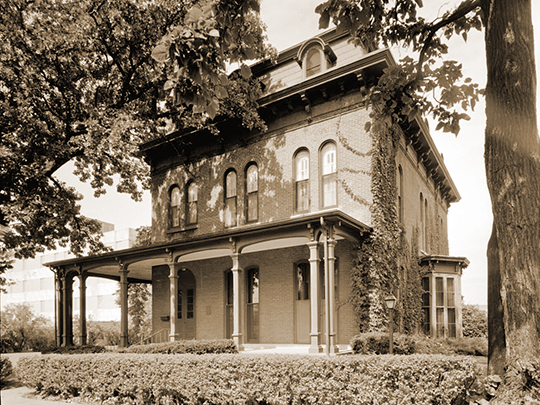 The Swain-Vincent house (824 Third Avenue South, Fort Dodge, IA) was documented by the Historic American Buildings Survey [HABS ‡] in 1972 and listed as The Vincent House on the National Register of Historic Places in 1973.

The Swain-Vincent house (ca. 1871) is important architecturally as a well-preserved example of a type of Victorian house to be found in cities throughout the United States: the town residence built for a prosperous businessman of the post Civil War period. Historically the house is significant because its second owner, Webb Vincent, was important in the gypsum industry in Fort Dodge.

The house was built for James Swain, but was apparently not completely finished indoors until after Webb Vincent purchased the house in 1879, according to Mrs. Donald Vincent (Anne) when she was interviewed in 1963-1964. The plan is substantially the same as when completed. The gypsum wall plaster, at the walls of the third floor ballroom is of interest.

James Swain, the first owner, was born in New Hampshire on 12 September, 1816 and moved to Nunda, New York, when young. He studied mercantile trade at Gennessee College in Lima, New York, in 1838 and married Adeline Morrison in June 1846, moving to Buffalo, New York in 1854. In 1858 he came to Fort Dodge and engaged in the wholesale and retail drug business. His was the first drugstore in the town. He had built for him the house later owned and occupied by Webb Vincent and lived there until his death on 27 Dec. 1877. It appears that the Swains were not able to afford their large house and rented rooms to newcomers in town and made their home available for parties, also presumably as a means of augmenting their income.

Adelaine Morrison Swain, James's wife, was born in Bath, New Hampshire, on 25 May 1820. In 1838 she was teaching drawing, painting, and modern languages at the Troy Conference Academy at West Poultney, Vermont, and was teaching at Nunda, New York, in 1843. After coming to Fort Dodge in 1858, she taught French, higher English "branches," piano, and oil painting to young ladies. After her husband's death, she was nominated in 1881 by the Greenback Party for State Superintendent of Public Instruction, and in 1884 she was a delegate-at-large to the national convention of the party held, in Indianapolis. She was an advocate of women's political equality and was elected honorary vice-president for life of the National Suffrage organization. Both James and Adelaine Swain were charter members of the first Spiritualist Society of Fort Dodge.

Webb Vincent recorded the following information about himself in his "Early Reminiscences." He was born on 13 Nov. 1841 on a farm near Waterford, Pennsylvania. In 1844 his father traveled to Chicago in search of something worth investing in. "He reported Chicago only a slough" and returned to his Pennsylvania farm until 1854, when he made an exploratory trip to Des Moines. He seems to have liked what he saw, for in the following year he moved his family to Fort Dodge. They traveled by railroad to Dubuque, where the railroad ended, then proceeded overland for six days by horse and covered wagon to Fort Dodge. Their first house there was a one-and-a-half-story-high frame building 16 by 26 feet in plan in which Webb, as a fourteen-year-old boy, took a responsible part in building. In 1861 Webb Vincent enlisted in the Civil War army and served until the Fall of 1864. He worked for the Northwestern Coal Company near Boone, Iowa, from 1867 to 1869. In 1869 he was appointed receiver of public moneys, and he held the position until the office was discontinued in 1876. He married in 1870 and said that he found the "moderate salary ... a welcome addition to my income." His "Reminiscences" relate the founding of the gypsum business:

In 1870, associated with my friend George S. Ringland, I began experimenting with gypsum. We burned gypsum on log piles down in Gypsum Hollow and we cooked gypsum in kitchen utensils on our kitchen stoves. In 1872 our first mill was built and S. T. Meservey was included in the company. The panic of 1873 was not a favorable setting for the new industry. It was up-hill work with not a dollar of profit for eight years. We were the inventors and originators of brown coat mortar, using stucco instead of lime for the first coat of plaster. It was used in repairing the ceiling of the Merchants National Bank building and on the walls of the third story of my present home. Many a prospective customer has been led up those long two flights of stairs to see it.

Large deposits of gypsum are found in the immediate vicinity of Fort Dodge. At first in Fort Dodge, "gypsum rock was considered the ideal building material. Its present [1913] use, as stucco, was not thought of at that time. It was used quite generally for foundations, and in the construction of buildings." Gypsum was thus used in the construction of the homes of John F. Duncombe and of John O'Loughlin Sr., and in the Illinois Central Depot, and Scanlan's Blacksmith Shop, for example.