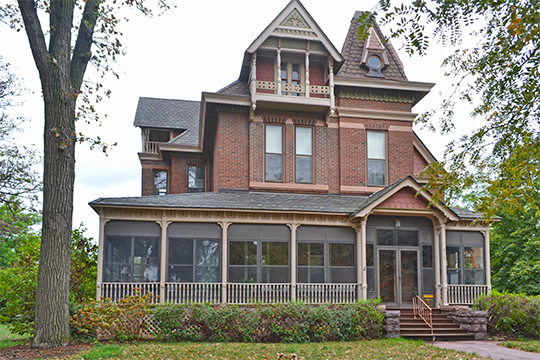 The Oak Hill Historic District was listed on the National Register of Historic Places in 1977. Portions of the content of this web page were adapted from a copy of the original nomination document. [‡]

The buildings of the Oak Hill District stand today as symbols of elegance, grace, and prosperity that characterized the buoyant heyday of Fort Dodge development. The variety of artistic expressions, when keyed to dates of construction, provide clear examples of the architectural styles which followed one another swiftly through the latter 19th and early 20th centuries, from Italianate and Second Empire to the long lines of Frank Lloyd Wright's Prairie School. Collectively, these residences reflect the taste and cultural vitality of the community's leading citizens during a time that spanned the transition from town growth to urban maturity.

At the time of its formation, the Oak Hill area was located in that part of the city known as East Fort Dodge, a stretch of land situated at the immediate outskirts of the original townsite which was along the Des Moines River. Even as construction was occurring in Oak Hill, however, the city was spilling beyond into other additions and subdivisions. Today, this historic district appears to be in the heart of town, a curious survivor from the tide of outward business expansion. The fourteen large homes, with their spacious lawns, were erected by prominent Fort Dodge bankers, businessmen, and industrialists between the Civil War and W.W. I, with two-thirds of the buildings considered here having been built during the period 1888-1910. It was an area of growth that kept pace with the industrial expansion taking place in the nation as a whole.

More specifically, the development of Oak Hill occurred in three phases that flowed from significant changes in the city's population and the prosperity generated by each. The trend of this building construction progressed through the district in a west to east direction. During the initial phase of city growth, prior to 1880, three prospering men of business and finance built their residences in the westernmost end between 9th and 10th Streets. The county seat town then passed through a second phase between 1880 and 1885 when its population rose by more than one-fourth. The resulting prosperity had by 1890 encouraged the completion of three additional houses between 10th and 11th Streets. The last and most vigorous phase of population growth prior to W.W.I occurred in Fort Dodge between 1890 and 1905. The city's population swelled by a remarkable 79% from 1890 to 1895, and then gradually subsided to an 18% growth from 1900 to 1905. It was at this time that the gypsum industry was assuming a substantial role in the economic life of the city as gypsum plaster steadily displaced lime plaster in building construction throughout the nation. The Oak Hill area reflected these times of economic boom, for eight of the fourteen total houses considered here were erected in the fifteen year period that followed the renewal of construction there in 1896.