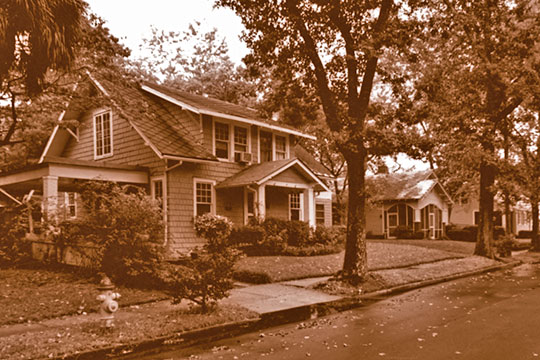 The Daffin Park-Parkside Place Historic District was listed on the National Register of Historic Places in 1999. Portions of the content of this web page were adapted from a copy of the original nomination document. [‡]

The Daffin Park-Parkside Place Historic District is an early 20th-century residential neighborhood developed in conjunction with a major urban park on what was the southeastern outskirts of the city of Savannah. It is located adjacent to the earlier Ardsley Park-Chatham Crescent Historic District, a residential neighborhood developed with a Beaux-Arts plan. Daffin Park-Parkside represents the automobile-oriented growth of the city of Savannah at the beginning of the 20th century and the city's efforts to ensure that parks and green spaces were available to the increasing numbers of residents who lived beyond the city's public squares. [see: Early Automobile Suburbs, 1908 to 1945]

Named for Philip Daffin, the first chairman of the Savannah Park and Tree Commission, Daffin Park features the symmetry and axiality of the neighboring Ardsley Park-Chatham Crescent Historic District to the west. A circular node at the west end and Grayson Stadium to the east are linked by a 210-foot-wide mall that consists of four rows of live oak trees set between two oak-lined allees. Athletic fields and playgrounds have been established north and south of the mall. Both of the promenades originally terminated in a circular drive. Diagonal drives join the circular drive with each corner of the rectangular-shaped park.

John Nolen's original plan for Daffin Park called for live oaks along the boundary streets (Victory Drive, Waters Avenue, Washington Street, and Bee Road), the mall, and approaches to be planted 40 feet apart. In most areas, these live oaks remain. Granite curbing is used extensively throughout the park. Municipal stadium was constructed in the 1930s. It was replaced in 1941 by Grayson Stadium. The stadium altered the circular terminus and the radial drives on the east side of the park. Located on the east side of the park, behind Grayson Stadium, is Herty Park. Herty Park maintains Nolen's plan for a shady pine grove with pines planted 20 feet apart. A portion of Herty Park, however, has been encroached upon by the stadium.

Grayson Stadium is currently used by the farm team for the Los Angeles Dodgers, the Savannah Sand Gnats. Built in 1941, the stadium is a large, C-shaped building with an arcaded brick entrance and covered and uncovered bleachers. Load-bearing walls are constructed of concrete and the roof is constructed with exposed steel framing. The uncovered concrete stands survive from the earlier Municipal Stadium.

The western triangular tract contains a children's playground as designated in the original design. It is shaded by live oaks and now features modern play equipment. The southern area of the park, designated by Nolen as "parade ground and baseball field," retains the open space for ball fields. The northern half of the park contains a large ornamental lake with two fountains and a boardwalk leading to the gazebo in the center. Around the perimeter of the lake is a narrow walking path. A community pool complete with bathhouses and a community center and basketball and tennis courts are located adjacent to the lake.

Parkside Place, the residential neighborhood south of the park, continues the city's grid-iron plan. The neighborhood, like much of Savannah, is set on flat terrain. The houses are oriented to the north and south. Unpaved service lanes run behind the properties parallel to the main streets. The north-south streets (Live Oak, Cedar, Ash, and Hickory streets) were paved later than the east-west streets. Cedar Street and part of Ash Street remain unpaved. The streets have numerous live oaks, crepe myrtles, and sweet gum trees planted at regularly spaced intervals in the sidewalk strips. Original granite curbing has been retained throughout a large portion of the historic district. Mature live oaks and magnolias that pre-date the suburb have, in some cases, determined the footprint and setbacks of several houses.

The larger houses in the district, built prior to 1920, front on Daffin Park and are found in the northwest and north-central portions of the neighborhood. The majority of the houses are single-family dwellings which range from large two-story houses in the north-west section to the more prevalent one-story bungalow. Most lots feature only one dwelling and some include garages or other outbuildings.

Craftsman-style houses in Parkside Place are typically one-story bungalows, although two-story Craftsman houses, such as 1109 Washington Street, were built in the neighborhood. These houses are generally characterized by the relatively low-pitched roofs, broad eaves with exposed rafter ends, and decorative knee-bracing under the eaves. These houses were built with cross, side, and front gables. Originally clad in wood weatherboard, clapboard, or shingles, some houses have been sided with aluminum or vinyl siding. Many of the Craftsman bungalows feature large, full-width front porches. Windows for many of these houses feature vertically divided sashes over a single-light sash.

The Colonial Revival style, popular in Georgia in the first decades of the 20th century, is well represented in Parkside Place. In this neighborhood these houses are characterized by plain massing-rectangular forms covered with side-gable roofs-horizontal siding, and multi-paned, double-hung sashes. Many have sidelights and transoms at the entrance. The Cape Cod Cottage is the most common form of one-story Colonial Revival-style houses. The Cape Cod Cottage is loosely patterned after early wood frame houses in eastern Massachusetts and was most common from the 1920s to the 1940s.

Tudor Revival houses appear throughout the historic district. These are pared-down examples of the style, and generally feature steeply-pitched, cross-gable roofs, brick veneer exteriors, and round arched doors, windows, and porches. The facade is typically dominated by a prominent cross-gable, and many display keystones on the arched openings. These houses range in height from 1 to 1-1/2 stories.

Landscaping throughout the historic district is consistent with the landscaping in the park in terms of age, species of plantings, and plant spacing. There is evidence of regularly spaced plantings of specific species through much of the historic district and significant portions of this pattern remain. The city of Savannah undertook a city-wide planting program in the 1920s, and it is likely that many of the trees along 50th Street and Washington Avenue were planted at this time. The live oaks along the northern side of Washington Avenue were specified by John Nolen in his original plan for Daffin Park, but were not planted until the 1920s. Live oak trees are found in Daffin Park and throughout the neighborhood. Along 47th Street alternating palmetto palms and crepe myrtles spaced 20 feet apart front the house lots. Sweet gums proliferate the western half of the district. Most common is a combination of alternating sweet gums and crepe myrtles spaced 20 feet apart. Plantings in some of the blocks of the southeastern area of the historic district are notably sparse. Azalea and camellia bushes are common in yards and gardens, and there are several magnolia trees within the neighborhood.

The areas surrounding the Daffin Park-Parkside Place Historic District are different in character from the park and its associated residential neighborhood. The area to the east is nearer Casey Canal and features smaller scale, mostly modern development. Some multi-family apartments are located in the area. To the south, the grid of city streets continues although the houses were mostly built after 1950. Ardsley Park-Chatham Crescent Historic District bounds Daffin Park-Parkside Place to the west. Early 20th-century houses are located in the neighborhood north of Daffin Park.