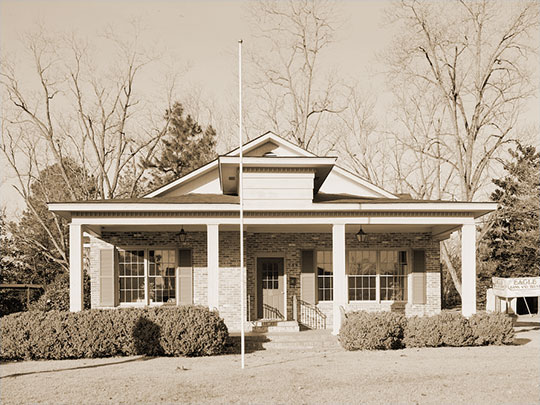 The South Main Street Residential Historic District was listed on the National Register of Historic Places in 1989. Portions of the content of this web page were adapted from a copy of the original nomination document. [‡]

The South Main Street Residential Historic District is located along South Main Street, south of the central business district in Statesboro, Bulloch County, Georgia. The district is bordered by Walnut Street on the west and the Southern Railway on the east. This district is typical of residential neighborhoods dating from the 1910s and 1920s, comprised mainly of single-story bungaloid structures constructed in an area with a gridiron street pattern. Arranged perpendicular to the street, the houses vary in setback and lots vary in size. The closely spaced residences are freestanding and are very similar in style and overall character. The house lots vary in width from 60 to 75 feet with small front yards separated from the street by sidewalks.

Architectural styles found within the district include Craftsman/Bungalow, Queen Anne cottages, and a single American Foursquare. The predominant architectural influence found within the district is the Craftsman/Bungalow style. These 1 and 1-1/2 story residences date from about 1910 through 1930 and feature details commonly found on bungalows constructed in Georgia during the early 20th century. Common details include multi-gabled roofs, clapboard siding, and extended eaves with exposed rafters. Porches, both screened and unscreened, are featured on most of the historic structures. Most of the porch posts are tapered wooden columns on brick piers, although some are entirely brick. The American Foursquare is a two-story residence constructed on a square plan with a pyramidal roof.

Landscaping within the district is comprised mainly of informally landscaped yards. The individual yards feature plants that were commonly used by south Georgia homeowners during the early 20th century, including azalea, crepe myrtle, and oak trees. Mature oak and pine trees are found on many of the lots. The South Main Street Residential Historic District does not contain any landscaped medians or parks.

Overall, the district has retained much of its historic character and integrity. This section of South Main Street was historically a residential area. As Statesboro developed through the mid-20th century, the business district expanded along the major north-south thoroughfare to meet the needs of the community. A number of single family residences have been converted to commercial usage. This change of use has brought some modern commercial signage to the neighborhood, but the historic character of the properties has not diminished.

The South Main Street Residential Historic District played an important part in the historical development of downtown Statesboro. The district is significant in the area of architecture for its collection of early 20th-century bungalows which have retained their historic character. This neighborhood may also be significant in the area of social history for housing middle-class residents and for their role in the development of Statesboro during the city's years of prosperity.

In terms of architecture, the district is significant for its collection of historic single-family residences. These houses represent an important type of historic building in Georgia: the early 20th-century single-family dwelling. Furthermore, these houses represent local interpretations of the Craftsman/Bungalow style of architecture which was extremely popular in Georgia and the southeast. These small-town examples of Bungalow houses typically are 1 to 1-1/2 stories high with broad gable roofs, wide porches, and typical Craftsman woodwork details including a variety of wood siding, simple porch posts and railings, and exposed rafter ends. Several examples within the district feature hipped roofs instead of the typical gabled roof and brick has been used as both a decorative and structural element within the district. Also represented in the district is a good local example of an American Foursquare house and, on several houses, examples of late-Victorian Eclectic detailing. Constructed between 1910 and 1930, the houses in the South Main Street Residential Historic District represent the modest, small-town residential or neighborhood architecture in early 20th-century Georgia. They also constitute the smaller of two such historic residential neighborhoods in the multiple property listing area in Statesboro. As such, they represent more than just a collection of individual buildings; taken together, they represent a historic residential neighborhood, the largest in the multiple property listing area.

In terms of social history, the district may be significant for housing a mixture of middle-class residents from the historic period to the present; however, this has not been documented to National Register standards at this time. The neighborhood was occupied by moderate income families with many of the residents working in the downtown business district which is within convenient walking distance. Many of the neighborhood residents were actively involved in commerce or agri-business. Two important local educators lived within the district: Sallie Zetterower, for whom a local elementary school was named and Lilly Deal, who taught school for sixty years. The South Main Street Residential Historic District continues as a largely intact middle-class neighborhood. Like neighborhoods in other cities around Georgia, many of the houses have been subdivided into multi-family rental units or have been converted to commercial use. Regardless of the change in use, the houses have been maintained in a manner keeping with the historic nature of the neighborhood and reflect the changes which have occurred in early 20th-century neighborhoods around the state.