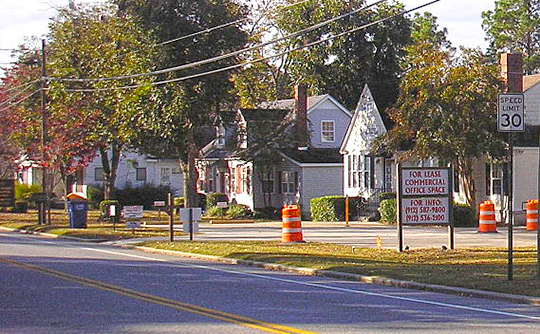 The North College Street Residential Historic District [‡] was listed on the National Register of Historic Places in 1989.

The North College Street Residential Historic District is typical of small-town housing developments of the 1910s and 1920s, in Statesboro and elsewhere in Georgia, comprised mainly of single-story bungaloid structures constructed in an area with a gridiron street pattern. Arranged perpendicular to the street, the houses vary in setback. Lots, although relatively small, vary in size. The closely spaced residences are freestanding and are very similar in style and overall character. Mature oak and pine trees line North College through most of the district.

The predominant architectural influence found within the district is the Craftsman/Bungalow style. These one- and one-and-a-half story residences date from about 1910 through the 1920s and feature details commonly found on bungalows constructed in Georgia during the early 20th century. Common details include multi-gabled roofs, weatherboard siding, and extended eaves with exposed rafters. Porches, both screened and unscreened, are featured on most of the historic structures. Most of the porch posts are tapered wooden columns on brick piers, although some are entirely brick.

Landscaping within the district is comprised mainly of informally landscaped yards. Mature oak and pine trees line North College Street through most of the district. The individual yards feature plants that were commonly used by south Georgia homeowners during the early 20th century, including azalea, crepe myrtle, and oak trees. The North College Historic District does not contain any landscaped medians or parks.

Overall, the district has retained much of its historic character and integrity. The district continues to be primarily single family residential. Just a few of the houses have been subdivided into apartments and only two of the houses converted to commercial uses. Two houses in the neighborhood were constructed in the 1940s and are classified as non-contributing properties. These properties feature materials, scale, and setback similar to the historic properties and do not distract from the overall character of the district. Other alterations to the district include use of corrugated metal to replace shingles as a roofing material.

The North College Street Residential Historic District played an important part in the historical development of the downtown Statesboro area. The district is significant for its collection of early 20th-century bungalows which have retained their historic character. This neighborhood might also be considered significant in the area of social history for housing middle-class residents and for its role in the development of Statesboro during the city's years of prosperity.

In terms of architecture, the district is significant for its collection of historic single-family residences. These houses represent an important type of historic building in Georgia: the early 20th-century single-family dwelling. Furthermore, these houses represent local interpretations of the Craftsman/Bungalow style of architecture which was extremely popular in Georgia and the southeast. These small-town examples of Bungalow houses typically are one- to one-and-a-half stories high with broad gable roofs, wide porches, and typical Craftsman woodwork details including a variety of wood siding, simple porch posts and railings, and exposed rafter ends. Several examples within the district feature hipped roofs instead of the typical gabled roof and brick has been used as both a decorative and structural element within the district. Constructed between 1922 and 1930, the houses in the North College Street Residential Historic District represent the modest, small-town residential or neighborhood architecture in early 20th-century Georgia. They also constitute the greatest concentration of such houses in Statesboro and in the multiple property listing area. As such, they represent more than just a collection of individual buildings; taken together, they represent a historic residential neighborhood, the largest in the multiple property listing area.

The neighborhood was occupied by moderate income families with many of the residents working in the downtown business district which is within convenient walking distance. Some of the residents were self-employed (such as Dr. E. N. Brown, a dentist, Gus Floyd, a black barber, and W. C. Akins, owner of Akins Hardware) while others were employed by local merchants. During the historic period, residents of district included a manager for the Coca-Cola Bottling Company, a painter, a mail carrier, a minster, a barber, and two dentists. Although the district was not historically a racially mixed neighborhood, a black custodian lived in the house at 103 College until after World War II. The North College Street Residential Historic District continues as a largely intact middle-class neighborhood. Like neighborhoods in other cities around Georgia, many of the houses have been subdivided into multi-family rental units and a few have been converted to commercial use. Regardless of the change in use, the houses have been maintained in a manner keeping with the historic nature of the neighborhood and reflect the changes which have occurred in early 20th-century neighborhoods around the State.