Photo: Home in the Venezia Park Historic District, Venice, FL. The Historic District was listed on the National Register of Historic Places in 2010. Photographed by User:Ebyabe (own work), 2010, [cc-by-3.0 (creativecommons.org/licenses/by/3.0)], via Wikimedia Commons, accessed December, 2015. 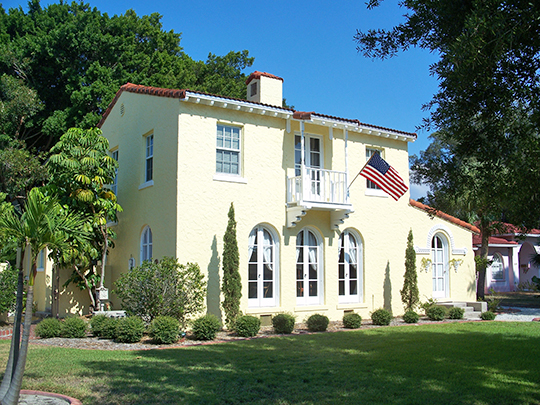 Venezia Park Historic District is a collection of moderately sized Spanish Colonial Revival style residences located on the streets radiating from a central, trapezoidal shaped park. The park, heavily landscaped with native long-leaf pine and Australian pine, and bounded by the intersecting streets of Palermo Place, Nassau, Salerno and Sorrento Streets, serves as the focal point for the neighborhood. The overall street design emphasizes visual and physical access to the park by all residents of the area. Houses are one and two story, hollow clay tile and stucco dwellings with clay, barrel-tiled roofs. Applied ceramic ornamentation and balconies add texture and variety to the residential neighborhood.

Venezia Park Historic District is part of John Nolen's 1925 comprehensive plan for Venice. The district contains a concentration of single family residences built during the initial period of development, 1925-1928. As required by the Brotherhood of Locomotive Engineers' (BLE) architectural design criteria, structures were built in the Mediterranean Revival style. The most elaborate of the houses front Venezia Park on Venezia Avenue. The majority of these houses are two story and characterized by a complexity of setbacks, ornate wood balconies and clay tiled multiple rooflines. Single story houses are found on Palermo Street and Nassau Avenue, and are also characterized by arched openings, deep setbacks and ornate wooden balconies.

In general, the structures tend to have irregular plans with patios, courtyards, or arcades having multiple facets in the form of one story projections, courtyards, projecting porticos, porte cocheres and walls. They are both hollow clay tile or wood framed structures with smooth or textured stucco finishing. There are multiple rooflines ranging from gable to hip which provide variety to the streetscape. Flat, parapeted roofs are limited to small wings or garages; all original main and pantile roofs are covered in clay barrel tile. The majority of roofs has rain gutters and little or no overhang.

The interiors of residential structures reflect the modest to elaborate exteriors. Beamed cathedral ceilings, ceramic tiled floors and ornamental details throughout demonstrate the quality and craftsmanship of Venice's builders and architects. Many details such as inlaid terracotta tile were imported from Tunisia and Spain. Such architectural features as arched doorways and attached columns are found in even the most modest of the medium-sized houses.

Houses are detached, each with a separate garage and, in many cases, an accessory apartment. The structures within the district are in excellent condition and are relatively unaltered with the exception of the replacement of steel casement windows with aluminum replacements. Such replacements are common in Florida to combat the sub-tropical environment and salt air corrosion.

The developers of the Nolen Plan for Venice, the Brotherhood of Locomotive Engineers, encouraged substantial building activity in Venice to provide adequate housing for all income ranges. The Venezia Park Subdivision of the Plan was designed for moderate to high income residents. The Venezia Park Historic District of Venice represents that portion of the 1925 Nolen Plan calling for the provision of medium income housing. The character and design of the district are significant elements of the framework of development in Venice.

The contributing houses of Venezia Park generally conform to the required architectural criteria of the Venice Company. Houses are larger than those found in the Edgewood Subdivision, but are substantially less ornate or elaborate than those large-sized residences constructed in the West Venice Avenue area. Houses are one or two story in height and designed in the Mediterranean Revival style. Houses are designed on medium sized lots and houses are oriented away from the adjacent properties to provide the maximum amount of privacy possible within a planned subdivision. In addition, vegetation such as native long-leaf pine was used to provide noise and privacy buffers. The architectural uniqueness of each house shows a concerted effort on the part of the developers of Venice to provide the highest possible standard of living for the middle income class.

Architectural standards were strictly applied to construction in Venezia Park, resulting in a cohesive neighborhood relating in both setting and architectural design. The structures contribute to the district architecturally through the ornamental design qualities and careful placement surrounding the park itself.

The district is a significant element of the comprehensive plan for the City of Venice as created by city planner John Nolen. The large park provides a green setting for medium-sized Mediterranean Revival style houses. The overall street pattern surrounding the park is visually interesting and connects to the many fine residences of the district. The district is significant for the overall plan layout as well as the architectural merits of the individual structures.

The social history and community planning and development of Venice during the initial period of development are closely related in the Venezia Park Historic District. Because the plan for Venice was designed around social status, the district, as a successful component of the plan, shows the development of a residential neighborhood specifically designed to meet the needs of the middle class.

The central park in this district also contributes to the social and planned development of Venice. The neighborhood is named for the green space, "Venezia Park," and clearly indicates the significance green spaces and parks had on the quality of life in the fledgling town. The park and landscape vegetation were provided by Prentiss French and the Landscape Department of the City of Venice. The designed green spaces and mature plantings from the historic period distinguish designed Venezia Park from later surrounding development.