Photo: Home in the Edgewood Historic District, Venice, Saratoga County, FL. The Historic District was listed on the National Register of Historic Places in 1989. Photographed by User:Ebyabe (own work), 2010, [cc-by-3.0 (creativecommons.org/licenses/by/3.0)], via Wikimedia Commons, accessed February, 2014. 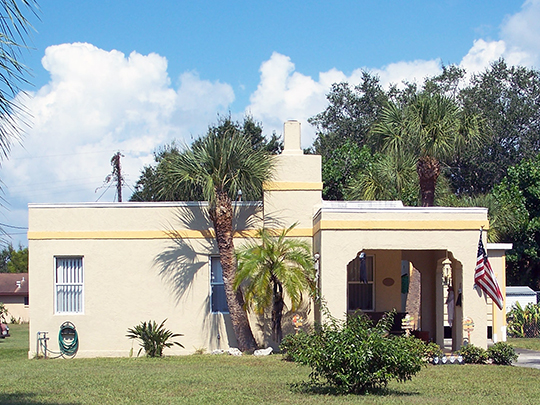 The Edgewood Historic District was listed on the National Register of Historic Places in 1989. Portions of the content of this web page were adapted from a copy of the original nomination document. [‡]

The Edgewood Historic District, created under the Nolen Plan of 1925 during the years 1926 and 1927, helped to satisfied the need for low and moderate income housing. (see John Nolen, landscape architect and city planner)

The modest houses were built on fifty foot lots in an orderly fashion. Landscape features are limited to broad avenues and orderly plantings of Washingtonia Palms; a community park is located outside of the historic district. The historic resources of the Edgewood District occur on both sides of Groveland Street in a three block area originating at the Venice By-Pass Highway, and in one block of Myrtle Street immediately to the south. Houses are spaced uniformly on small lots. Setbacks, scale, and building proportions are uniform. The houses are one story in height with the exception of several two story houses.

The majority of the contributing houses in Edgewood are designed with elements of the Mediterranean Revival style. These structures are one story wood framed, hollow clay tile or poured concrete with a smooth or textured stucco finish. The roofs are flat with parapets pierced with small clay barrel tiled pent roofs. The windows are 3/1, 4/1, wood sash set in painted round arch surrounds. These are products of mass construction and planning when five or six houses were built at the same time by the same builder. Several houses have small round arch arcades forming small porches or stoops.

Styles other than the Mediterranean Revival style are found in Edgewood as design controls were not as strictly enforced in this modest neighborhood by the Brotherhood of Locomotive Engineers. These are one story, gable front bungalows or frame vernacular with modest stylistic features. The exteriors are drop siding with corner boards. Fenestration is regular with 4/1 and 1/1 double hung sashes.

Generally, the historic structures of Edgewood are in good condition, having been occupied and well maintained. Most alterations are replacement windows and new stucco finishing. These alterations are typical in the sub-tropical climate of central and south Florida.

The developers of the Nolen Plan for Venice, the Brotherhood of Locomotive Engineers, encouraged substantial building activity in Venice to provide adequate housing for all income ranges. The Edgewood District of Venice represents that portion of the 1925 Nolen Plan calling for the provision of low and moderate income housing. The character and design of the district are significant elements of the framework of development in Venice.

The houses of Edgewood generally conform to the required architectural criteria of the Venice Company. Houses are smaller than most in Venice, less elaborate, and are placed on smaller lots. Houses are generally one story in height with elements of the Mediterranean Revival style. Unlike other subdivisions of Venice constructed during the historic period, architectural standards were loosely applied to construction in Edgewood. As a result, several houses were constructed in simple frame styles.

Residential construction started in Edgewood in July, 1926 when thirty houses were announced for construction with a combined value of $135,000. The contributing houses were, for the most part, designed by M. M. Gleichman of Tampa; all were constructed by one contractor, Carey and Walker.

The district today is a residential neighborhood with quiet streets, a small park that was part of the original design, and mature palms. Non-contributing structures are concrete block and are built in the same proportions as the historic structures. They do not conflict or detract from the historic resources, nor do they compromise the integrity of the district. Houses have been well maintained and are not in need of extensive rehabilitation or restoration.