Photo: Home in the Laurel Park Historic District, Sarasota, FL. The Historic District was listed on the National Register of Historic Places in 2008. Photographed by User:Ebyabe (own work), 2011, [cc-by-3.0 (creativecommons.org/licenses/by/3.0)], via Wikimedia Commons, accessed October, 2015. 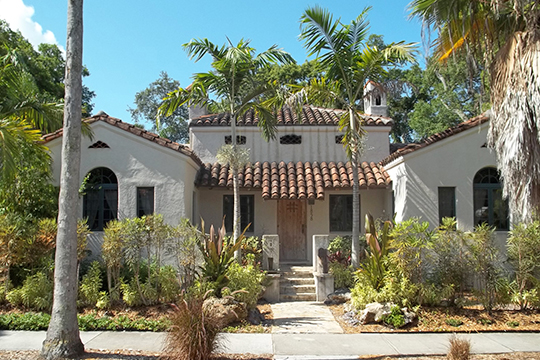 The Laurel Park Historic District was listed on the National Register of Historic Places in 2008. Portions of the content of this web page were adapted from a copy of the original nomination document. [‡]

The Laurel Park Historic District is a small, residential neighborhood located immediately south of the downtown Sarasota commercial center. The district encompasses all and parts of six historic subdivisions, comprising approximately 50 acres, and contains 314 buildings, 251 of which contribute to the historic character. The contributing buildings represent 80 percent of the total in the district. The majority of the buildings in the district are constructed of wood, but there are also some masonry examples, and both types of construction represent stylistic trends associated with the first half of the twentieth century. The styles include Frame Vernacular, Masonry Vernacular, Bungalow, Mission Revival, Colonial Revival, and Mediterranean Revival. There are few high style buildings in the district. The contributing buildings were constructed between 1920 and 1957, and range in height from one to two stories, and generally exhibit good levels of integrity. Three contributing houses in the district were constructed in the first decade of the twentieth century and were moved into the district c. 1937.

The Laurel Park Historic District represents one of a number of historic areas in Sarasota, which often stand as clearly defined pockets of resources associated with the historical residential development of the early 20th century.

The period between 1900 and 1926 illustrates the expansion of Sarasota's economic, social, and communal development. Attracted by the climate, the availability of land, the ability to speculate in the booming real estate market, and improved access to the region, wealthy investors began to take an interest in the region. The potential for profiting from land development projects or spending the winter months in a warmer climate drew wealthy American capitalists, such as Edson Keith, Bill and Marie Selby, J.B. Cousins, and C.N. Payne to Sarasota. The Laurel Park Historic District is situated in a section of the city that drew the attention of land speculators. The Laurel Park neighborhood lies within the former land holdings of Owen Burns (1869-1937), a native of Fredericktown, Maryland, who came to Sarasota in 1910. He decided to remain in the community permanently and bought more than seventy-five percent of the land in the city platted by J. Hamilton Gillespie and founded the Bums Realty Company and the Burns Construction Company. Burns developed a number of small residential subdivisions in Sarasota, including the small Burns Court Subdivision, which is notable for its Mediterranean Revival style residences. Eventually, Burns purchased all of the real estate holdings of the Florida Mortgage and Investment Company and developed commercial blocks in downtown Sarasota.

The district is significant for the role it played in the growth of the residential areas located near the downtown commercial center during the real estate boom of the 1920s and for reflecting the decline of residential building activity in those same areas during the Great Depression and post World War II eras.

In 1913, the population of Sarasota stood at 2,000, and although the major plats for the Laurel Park neighborhood had already been laid out, some of the streets were still incomplete, and no houses had yet been constructed in the area. The development of the Laurel Park neighborhood got underway only slowly in the mid-1920s. Among the parcels laid out but not immediately developed were the 1913 Osprey Avenue Subdivision and the 1912 Corrected Subdivision of Block G by the Burns Realty Company. By 1925, most of the streets had been completed, and all but a few blocks had been subdivided into lots, many of them now featuring modest-sized residences and apartment buildings. The new construction, however, had been widely spread over the neighborhood, and there still large tracts of vacant land.

The Laurel Park neighborhood developed as a residential neighborhood for white residents of modest means. Only in a strip along Oak Street was land set aside for the construction of houses for homeowners of upper middle income. A select number of residences in this area exhibit characteristics of the Mediterranean Revival style which was popular in Florida during the 1920s. Most of the residents of the neighborhood were craftsmen, shopkeepers, office workers, and other persons who worked mainly at jobs in downtown Sarasota. In the 1920s, the Sarasota City Directory listed journalists, press operators, tailors, and a real estate speculator among the persons living in the area. In addition to persons having private homes, some Laurel Park residents are listed as living apartment buildings that had been erected in the neighborhood, such as the Mission Revival style apartment complex at 325 Ohio Place.

In addition to apartment buildings, some houses served as seasonal or permanent rentals. For instance, the residence at 555 S. Osprey Avenue functioned as a tourist facility from 1938 to 1971. It was known as the Nelson Lodge and the Tourist Home. Furthermore, the Colonial Revival residence at 636 S. Osprey Avenue was moved into the neighborhood c. 1937 and functioned as a guest house under various names and owners from 1939 to 1979.

Although the majority of the buildings in the historic district can be classified as Frame and Masonry Vernacular, the district also has distinctive examples the Mission Revival, Mediterranean Revival, Colonial Revival, and Bungalow style residences. The Laurel Park Historic District contains some excellent examples of popular styles constructed throughout the first half of the twentieth century, in particular Mission Revival and Mediterranean Revival. The residential architecture dates from c. 1920 to 1957. The majority of the buildings were constructed during the 1920s, but there are some examples of residences dating from the 1930s, 1940s, and 1950s. Many of the buildings, such as the small residences, duplexes, and apartment buildings, within the district were constructed as a direct response to the city's rapid growth during the real estate boom of the 1920s when Sarasota became a popular tourist and winter residence destination. Residential architecture is the predominant building form. Although the majority of the buildings lack individual distinction, they form a cohesive entity based on their styling, scale, and use. All of the contributing buildings maintain sufficient levels of historic architectural integrity to convey their historic character.