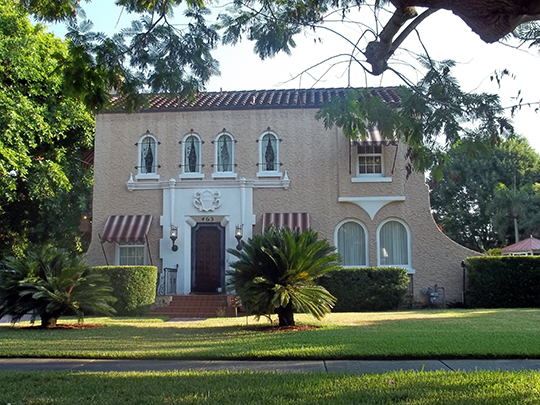 The once numerous Native American groups of Florida, including the Safety Harbor Culture groups in Sarasota, had been decimated by diseases like smallpox and yellow fever brought from Europe. By the early 1760s native groups of Florida were reduced to almost nothing. Handfuls of individuals were taken to Cuba when the Spanish population withdrew from Florida in 1763. While their groups disintegrated, others migrated into the state such as the Creeks. The Seminoles were originally part of the Creek Indian groups from Georgia and Alabama and historically a late arrival to Florida. Many members of their culture live primarily in South Florida today. Historians believe that the name "Seminole" came from the Spanish word cimarrone, used by early Spaniards to refer to Indians living apart from mission settlements. By the early 1800s, Seminoles had traveled as far south as Tampa and Sarasota. Between 1812 and 1820 pressure from settlers in Alabama and Georgia forced many Creeks to move into Florida.

Conflict arose between the settlers from Georgia and the Carolinas and the Seminoles, which ultimately resulted in warfare. In 1840, General Armistead, commander of the Army of Florida, established a new headquarters in Sarasota. Fort Armistead was situated on the mainland north of present-day Whitaker Bayou. Fort Armistead was one of the few posts that sent soldiers to Charlotte Harbor to pressure Seminoles into surrender and deported them to reservation areas west of the Mississippi. Although the location appeared good, illnesses such as diphtheria weakened the troops. After seven months the fort was abandoned.

The 2nd Seminole War (1835-1842) resulted in troops moving more Seminoles to Oklahoma. Yet a small group of 200-300 remained in the Everglades using the swamps as a refuge. The 3rd Seminole War, also known as the Billy Bowlegs War, pushed troops south, eventually removing 200 Seminoles to Oklahoma. A small group still remained in the swamps of south Florida, which were nearly impossible for federal troops to reach. The descendants of these groups are the modern day Florida Seminoles.

Before the Civil War, there were few people living in the part of Manatee County that would become Sarasota County in 1921. Ft. Armistead, built in the Indian Beach area during the Second Seminole War, was closed less than one year after it became operational due to a high rate of illness and death. When William Whitaker moved here in the 1840s, his mailing address was "Yellow Bluffs, Sarasota Bay." Not until after the Civil War was there a community named Sara Sota, located between Hudson Bayou and Phillippi Creek and one of a number of early communities formed by a steady immigration of pioneers. Most settlers came by boat to live in coastal communities. Others came overland in ox-drawn wagons to settle in the interior parts of the region.

This was frontier territory. Pioneers grew or caught their food, made their clothes, shopped in Manatee or Tampa, and fought the ever-present mosquito. Another characteristic of frontier life was the absence of a local judiciary. When a vigilante group in Sara Sota believed their first postmaster, Charles Abbe, was plotting to cheat some out of their homestead claim, they murdered him in 1884. The New York Times carried the story of the "Sarasota Assassination Society" on the front page.

Colonists sailed from Glasgow, Scotland in 1885 to settle in a new community of Sarasota. Laid out around Five Points, the new town was advertised by its owners as a sub-tropical paradise. Reality was harsh and most of the colonists left within a few months. John Hamilton Gillespie, sent by the town's owners to protect their investment, facilitated construction of a dock, laying out the streets, and the building of homes and a hotel. Gillespie became the first mayor when the town incorporated in 1902.