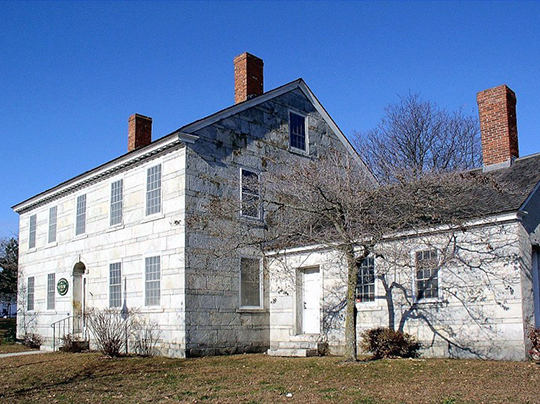 The William Jillson Stone House was listed on the National Register of Historic Places in 1971. Portions of the content on this web page were adapted from a copy of the original nomination document. [‡]

The William Jillson Stone House is located at 561 Main Street in the Willimantic section of Windham, Connecticut. It is a ten-room stone house, large and important looking. It was built by William Jillson of Cumberland, Rhode Island in 1825-27. At the time of its construction it overlooked a rocky gorge with the falling water of the Willimantic River with few or no other houses in the immediate locality.

The walls are built of native granite in alternating wide and narrow courses of ashlar masonry. After one hundred fifty years the foundations have not settled or there is no bulging of the walls nor cracking at the corners of the door or window openings.

The main house is nearly square. It has two stories, four-over-four rooms, the ridge of the gabled roof parallel with the highway and with two symmetric chimneys of red brick. There is a one-story kitchen ell with its gabled ell roof also parallel with the highway, its axis in the long axis of the house and with its chimney through the ridge line at the outer end. The back wall of the ell is continuous with that of the main house.

The front entry consists of two upright stone slabs as posts, topped by blocks with three parallel incised lines on front and inner faces. From these the semi-oval arch of the doorway springs which is marked on front face with incised lines to indicate separate blocks of the arch but actually it consists of a solid section cut in a curve on either side of the keystone. The window frames and most sash are original or very old. Beneath the cornice are mutules with bored holes to represent guttae. Immediately below these runs a row of large oval bead moulding.

The house plan is the center hall four room type. The four roughly square rooms have intervening chimney walls which are elaborated with simple mantled fireplaces in each room. The outer walls are about 17 inches thick and the windows set so that they are more or less flush with the exterior walls. The window sash is small and old if not original, Holdings about the doors are simple as are the chair railings, the unembellished fireplace mantles, the staircase decoration and the inside, swinging blinds and paneling of the casements of the first floor windows. Ceilings are 9' high and floorboards are random width larch (Larix laricina), a wood used not infrequently for this purpose in this locality in the early 1800's.

A brick wing attached to the west end of the house for commercial purposes in the 1920's is presently being demolished. It is believed that a railroad spur brought across the property in 1865 with the placing of new railroad line from Willimantic to Boston but now no longer in use will be removed so proper landscaping of the yards about the house may be completed.

The William Jillson Stone House is architecturally significant because it is an unusual and possible unique stone residence built between 1825-27; and the house has local historical significance as the residence of William Jillson, one of three Jillson brothers from Rhode Island who were the first to purchase water rights in the area of the Willimantic Falls. They established several mills there including a textile mill later purchased by the Willimantic Linen Co. and eventually by the American Thread Co. which was at one tine the major industry in Willimantic.

William Jillson Stone House has been restored by the Windham Historical Society and used as a museum.