Photo: Homes and Mill (no longer extant) in the Dayville Historic District, Dayville, CT. The Historic District was listed on the National Register of Historic Places in 1988. Photographed by User:Marcbela (own work), 2009, [cc0-by-1.0 (creativecommons.org/publicdomain/zero/1.0/deed.en], via Wikimedia Commons, accessed June, 2016. 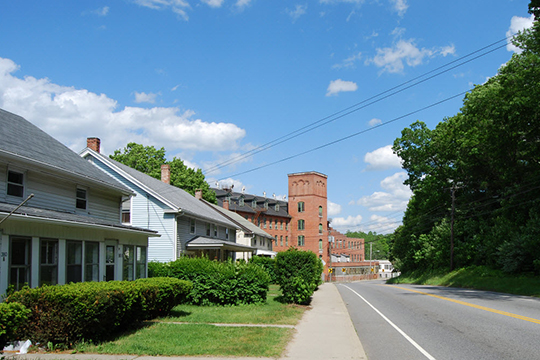 The Dayville Historic District was listed on the National Register of Historic Places in 1988. Portions of the content on this web page were adapted from a copy of the original nomination document [‡]

The Dayville Historic District's 21 major buildings are primarily 2 and 2-1/2 story residences of wood-frame construction, erected from the 1840s to 1912, with the majority constructed in the mid-19th century. The only non-residential building is the former Dayville Congregational Church. The buildings range from several large and impressive Main Street residences set back from the street on spacious lots or knolls to smaller, plainer houses on narrow lots.

The Dayville Historic District's earliest buildings, dating from the 1840s and 1850s, are in the Greek Revival style. They are characterized by gable roofs, often with the gable end to the street, full or partial cornice returns with a wide entablature, corner pilasters, and crossetted door and window frames. Several exhibit a portico formed by an extended upper-story gable or eave supported on fluted columns.

The Dayville Historic District exhibits integrity in its architecture and streetscapes. Despite the introduction of some modern sash and siding materials, all the major buildings retain their original form and characteristic details. The streetscapes have also largely retained their historical appearance, exhibiting the linear distribution, generous spacing between houses, medium street setback, and line of shade trees characteristic of a 19th century village aligned along a turnpike road. There are no modern intrusions in the district to interrupt the visual cohesiveness.

Three outbuildings remain in the Dayville Historic District from the period of significance: a carriage barn and a well house behind the Dr. Asahel Darling House, and the c.1867 carriage barn behind the John Sayles House. Other outbuildings in the Dayville Historic District (sheds, garages, etc.) are all of relatively recent construction and are not substantial in size or scale; they are not counted in the building totals. Of the 21 major buildings in the district, all are contributing.

The Dayville Historic District is significant as a concentration of mid-19th century buildings that have retained their architectural integrity and historical context. Especially noteworthy are a number of distinguished and well-preserved examples of Greek Revival and Italianate architecture. The Dayville Historic District retains the distinctive spatial characteristics of a mid-19th century village, including the linear arrangement of residences set on large lots.

The present community of Dayville owes its inception to the development of small waterpower sites along the Five Mile River by local landowners in the early 19th century. Wealthy farmers and landowners, such as Captain John Day, Abel Williams, and the Bassett and Alexander families, recognized the industrial potential of this swift-flowing stream. In the 1830s John Day constructed a dam, canal, and storage ponds which powered a cotton mill and woolen mill. A sawmill and blacksmith shop were later added to the complex. The village which grew up around this nucleus came to be called Dayville after the community's primary landowner and capitalist.

The development of Dayville received additional impetus in the late 1830s with the construction of the Norwich & Worcester Railroad through the center of the settlement. The village quickly became the shipping point for area manufacturers who received cotton bales and other raw materials at Dayville and shipped out finished goods the same way. The community also became a small commercial center, serving the immediate vicinity (which included several other small mill villages) with stores and shops, feed and lumber businesses, a hotel, livery stables, and doctors and other professionals. The construction of the Dayville Congregational Church in 1846 was further indication of the community's evolution as a central place.

In 1858 John Day sold his mills to Sabin and Harris Sayles, Rhode Islanders who converted the buildings to the manufacture of woolens. The Sayles' woolen venture — the Dayville Woolen Company — expanded throughout the 19th century: in 1870 the company employed 184 workers in the production of $400,000 worth of cashmere, around 1873 they built a large company store and meeting hall, and in 1882 they constructed a new brick mill. The company went bankrupt in 1893 and the mill was operated by a variety of owners into the 20th century. Textile production ended during the Depression when the mill was retooled for the production of wire, a use continued to this day.

During the 19th century period of prosperity, the Sayles brothers and others prominent in the community's industrial and commercial life occupied large and stylish houses on Main Street; indeed, the north side of Main Street might have been called "Manufacturer's Row." The Greek Revival house of Captain John Day was constructed around 1845 and after his death became the property of the Sayles brothers. The 1848 Greco-Italian Villa house on the northwest corner of Main and Pleasant Streets was first owned by Abel Williams, a merchant and investor in local manufacturing concerns; later, from 1861 until his death around 1900, it was the home of Sabin Sayles. Samuel Bassett, a landowner and business partner of John Day and Abel Williams, was the original owner of the house next door. Thomas Sayles, a Sayles relative and business associate, owned the large and ornate Italianate house toward the east end of the district on Main Street. Dry-goods merchant Warren Potter lived next door in an 1865 Italianate dwelling which was later owned by Benjamin Coggswell, superintendent of the Dayville Woolen Company. Although of later construction, the 1912 William LaBelle House continues this theme: LaBelle was the head machinist of the Sayles woolen mill and later a pharmacist who operated a drugstore in the Sayles Company brick block.

Two Pleasant Street houses were the homes of Dayville physicians. The Dr. Henry Hammond House, constructed c.1888, was the home of a prominent physician who practiced in Dayville for over forty years. Next door was the house and office of Dr. Asahel Darling, a graduate of Harvard Medical College who specialized in surgery. Dr. Darling also built a plainer Italianate house next door as a rental tenement.

The quality of Dayville's Greek Revival and Italianate architecture has been recognized since the 1930s when the WPA Census of Old Buildings identified the Captain John Day House as an outstanding example of the town's historic architecture. Constructed c.1845, the Day House displays the heavy proportions, rectilinear shapes, and classical motifs which embody the Greek Revival style. The house is unique among other buildings of this style in the Dayville Historic District for not having a temple-front form; instead, its gable is parallel to the street and extends to form a two-story portico on four Doric columns. Additional Greek Revival characteristics include fluted corner pilasters, crossetted window frames, and a front entry with pilasters, sidelights, architrave, frieze, and molded cornice.

Other buildings in the Dayville Historic District which are significant for embodying the distinctive characteristics of Greek Revival architecture include the former Dayville Congregational Church and the Alexander Blanchard House, both having temple-front forms with colonnaded porticos on fluted columns, flushboarded facades, corner pilasters, and heavily molded cornices. The porch of the church is in antis, a typically Greek feature in which the side walls project to form a closed end for the front colonnade.

The Abel Williams House, constructed c.1848, is an early and notable example of the Greco-Italianate villas introduced in mid-19th century pattern books. It combines Greek Revival and Italianate elements which usually appear only in their respective styles: much of the detailing, such as the portico, pilasters and columns, and crossetted window frames are typically Greek, yet the overall form of the house — its flat roof, belvedere, and bracketed and widely projecting eaves — recalls the Italianate style.

The Italianate style in the Dayville Historic District is epitomized by the 1865 Warren Potter House and the 1866 Thomas Sayles House with their bay windows, molded window hoods on consoles, and gable cornices ornamented by paired brackets, dentils, and paneling. Characteristics of the style are also exhibited by the Potter house's richly embellished entry porch and its round-headed double doorway with paneled pilasters and keystone. The raised moldings, round-arched openings, and carved keystones of the Potter house's marble fireplace mantles, and the heavily molded and paneled newel post of the Sayles house, echo the two house's exterior Italianate detailing.

Similar, albeit less elaborate, Italianate characteristics are evident in the c.1888 Dr. Henry Hammond House, the c.1877 Dr. Asahel Darling House, and their Pleasant Street neighbor, a multifamily dwelling constructed c.1885. In spite of having been sided, the three retain many typical features of the style: bracketed cornices, bay windows, and ornament on the entry porches or porch hoods.

The Dayville Historic District contains buildings known to have been constructed by local craftsmen Alexander Blanchard and George Truesdell. Buildings which can be attributed to Blanchard (partly on the basis of his many mechanic's liens) include the c.1840 Asher Starkweather House, the 1846 Dayville Congregational Church 1846, and Blanchard's own house, constructed c.1845. All of the buildings are characteristic of Blanchard's designs, which combine a bold colonnaded portico with Greek details such as crossetted door and window frames.

George Truesdell, who built a typically detailed, well-proportioned two-family house for himself and his brother, was the builder of the 1850 Westfield Congregational Church in nearby Danielson.