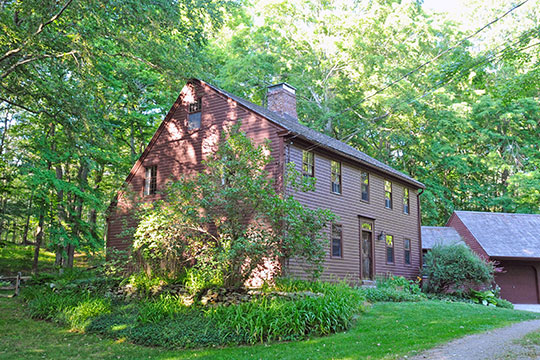 The Wickham Road Historic District was listed on the National Register of Historic Places in 1996. Portions of the content on this web page were adapted from a copy of the original nomination document. [‡]

The Wickham Road Historic District consists of three standing 18th-century houses with associated outbuildings, the foundation and chimney remains of another 18th-century house, and the sluiceway and partial foundations of a sawmill located on Beaver Brook (a branch of the Eight Mile River) to the east, on the south side of Geoffrey Road. The Wickham Road Historic District also includes the small pond formerly associated with the sawmill, known today as Pecks Meadow Pond.

Wickham Road is a narrow curving gravel road lined with stone walls and tall deciduous trees. The houses are spaced far apart and have considerable open land — the remnant of their historical agricultural acreage — surrounding them. The rest of the area, including the intervening land between Beaver Brook and Wickham Road, has grown up into woodlands and is now a game preserve.

The following properties are included in the Wickham Road Historic District:

Ruins of Wickham Sawmill, 1782, Geoffrey Road east of Beaver Brook. Site includes long depression in earth marking sluiceway or headrace leading from Pecks Meadow Pond dam (modern concrete structure) southward across Geoffrey Road to remains of sawmill, which are marked by foundation walls, some 6-8 feet high. At site there is scatter of stone, brick, and iron along ground. Counted as one contributing site and one noncontributing structure.

Although the sawmill site cannot be seen from the cluster of houses, and in fact today appears somewhat remote from the rest of the Wickham Road Historic District, it was historically part of the property associated with the house, now in ruins, at the corner of Wickham and Geoffrey Roads. The sawmill was built in 1782 by David Wickham, who ran it many years. The sawmill remained in operation by his descendents and other subsequent owners until about 1883.

The Wickham Road Historic District is significant because it recalls the appearance of the Connecticut countryside before the industrial age. Connecticut's historical development began with a long period in which the colony and later the state are characterized by an agriculture-based society. The overwhelming majority of its people were engaged in small-scale generalized farming and lived in simple, scattered homesteads such as those remaining today on Wickham Road.[1] The industrial enterprises in this period, which lasted at least until the middle of the 19th century in most areas, were mostly the saw, grist, and fulling mills and blacksmith shops that were integral parts of the agrarian economy. With its narrow winding route, stone walls, open fields, old colonial houses, and agricultural outbuildings, Wickham Road is an exceptionally cohesive reminder of this point in Connecticut's history. The ruins of the Wickham Sawmill and the sawmill pond contribute to the Wickham Road Historic District's significance because they testify to the sustaining role of early water-powered industry in the agricultural age.

The houses in the Wickham Road Historic District also have architectural significance because they embody the distinctive characteristics of 18th century vernacular domestic architecture. Their clapboarded exteriors, large brick or stone central chimneys, small-pane sash, plain detailing, and orientation with the entrance on the broad side typify the house-building practices of colonial New England.

English settlement of the part of East Haddam in which the Wickham Road Historic District is situated began in the first years of the 18th century. By 1733 there were sufficient families in the area to set up a second ecclesiastical society, which around 1740 erected a meetinghouse at Millington Green. The work lives of the early settlers were almost exclusively devoted to farming, with scattered homesteads forming the core of small farms. For the most part, the farms produced grain, meat, fiber, and dairy products for family or at least local consumption, though there undoubtedly was some surplus for sale, some of which may have been exported in the West Indies trade. Land holdings were small. For example, the farmstead associated with the Daniel Brainerd House was originally only 40 acres, and even that of the much larger Daniel Olmsted House was only 60 acres. Over time, the descendants of the early settlers added to the agricultural holdings associated with these houses, yet even by the early 19th century each property was under 150 acres. Olmsted and Brainerd were among the earliest settlers in the immediate area embraced by the district.

Small mills such as the sawmill started in 1782 by David Wickham were vital parts of the agriculture-based community. Wood formed the basis for most construction of homes, barns, and other farmstead buildings, as well as furniture. Although some items, notably shingles, clapboards, fence rails, and large framing members could be split or hewn from logs, anything involving boards, such as roof and wall sheathing, floors, and paneling, required a sawmill. The alternative — sawing boards above a pit — was so slow and laborious that it is not surprising that one of the earliest uses of waterpower in New England was to mechanize this arduous task. The Wickham Sawmill site suggests both the small scale of these early enterprises and the substantial effort that went into creating them. The sawmill was operated for many years by Daniel Wickham and continued in operation under other owners until about 1883.

The archeological significance of the Wickham House and sawmill sites has not yet been assessed. By their presence, however, they contribute to the Wickham Road Historic District as obvious artifacts of the period.

The three standing houses in the Wickham Road Historic District share several common characteristics of 18th century vernacular architecture. None has any architectural embellishment or stylish element to suggest an awareness of formal architecture; all make use of the simplest forms and materials. Either through survival or appropriate restoration and replacement in kind, all have the clapboarded exteriors and divided sash appropriate to the type, along with the large brick or stone central chimneys that formed the core of Colonial houses. The ruins of the Wickham House show that this small 1782 dwelling had a similar plan. The front entry treatment found on the Olmsted and Fuller houses — a door frame or surround formed of boards with moldings along the outer edge, with a transom above a paneled door lighting the hallway within — is also a typical Colonial feature, perhaps the most commonly found entry treatment of all.

Although five-bay, center-entry houses have persisted in the greatest numbers, the symmetrical three-bay variant, as seen in the houses at 129 and 153 Wickham Road, was also common. Similarly, although a full 2-1/2-story height appears to be more common today, houses with lean-to roofs at the rear, such as the Daniel Fuller House, 150 Wickham Road, were certainly not uncommon in the 18th century.

Two of the three houses have an interesting feature: a south-facing orientation rather than the house facing the road. This arrangement provided an extra measure of protection from winter north winds and allowed the southern sun to warm the front of the house. South-facing siting of houses appears to have been more common early in the century, though it certainly persisted for a long period in certain parts of the state.

The architectural qualities of the houses along Wickham Road, which so immediately recall their origins in the 18th century, thus reinforce the overall historical significance of the Wickham Road Historic District as a microcosm of the early Connecticut countryside.

[1]Although the Daniel Fuller House, 150 Wickham Road, was moved into the district in 1834, its original site was only 1-1/2 miles to the east, and it was relocated on the site of an earlier dwelling. Thus, it may be considered as a replacement that does not affect the historical settlement pattern on this part of Wickham Road.