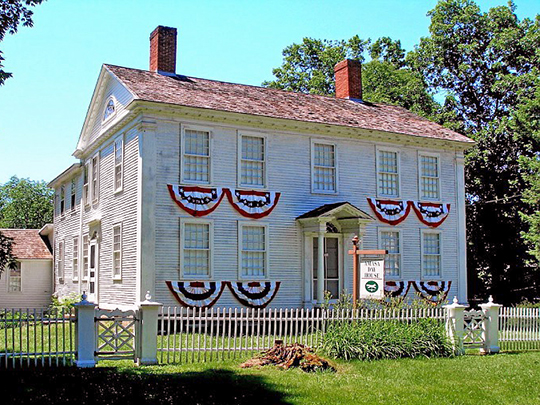 East Haddam's history, to a large degree, has been defined and molded by the town's relationship to the Connecticut River. When the first settlers arrived here about 1685, their holdings were part of Haddam, a huge town encompassing thousands of acres on both sides of the river. Haddam's main settlement area and the town's meeting house were on the west bank; and, although a ferry was established in 1695, it was a hardship for East Haddam families to attend Sunday services. This situation was alleviated in 1700 when the General Assembly, acting on a petition from several prominent residents, granted permission for the "inhabitants of Haddum that dwell on the east side of the great river to embody themselves in church estate." After construction of a meeting house in 1704, the affairs of East Haddam developed in increasing isolation from that of the mother settlement; and in 1734 the town was incorporated as a separate entity. Thus, from the very beginning, the influence of the "great river" shaped the development of the town's institutional and administrative organization.

East Haddam's first residents were subsistence farmers; and they tended to settle on the plains above the cliffs to the east of the river. Within two generations, however, adventurous and ambitious inhabitants recognized the economic opportunities that the river offered and began to settle at the Upper and Lower Landings where they engaged in various commercial pursuits. These included shipbuilding, fishing, and foreign and domestic trade; and, by 1750, both landings were active business centers containing wharves, warehouses, stores and residences.

Today, no discernible physical evidence of the fishing and shipbuilding industries remains; and all the wharves have disappeared.