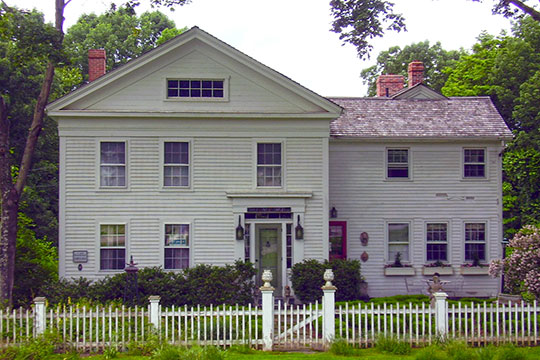 The Millington Green Historic District was listed on the National Register of Historic Places in 1996. Portions of the content on this web page were adapted from a copy of the original nomination document. [1]

The Millington Green Historic District is a group of fourteen 18th and early-19th century buildings set along Millington Road, Tater Hill Road, and Haywardville Road in East Haddam, Connecticut, surrounding a small triangular parcel of land known as Millington Green. The buildings include six houses, one of which was formerly the parsonage for the Congregational Church, a former one-room schoolhouse now used as a community center, and several small associated barns and other outbuildings.

The green that is at the center of the Millington Green Historic District is mostly lawn, with a few tall shade trees along the periphery. The green was formerly the site of the 1832 Congregational Church, the second meetinghouse on the site, which was destroyed by fire in 1971. Although there are some small signs, a planter, a bench, and a flagpole on the green, the green and its fixtures are counted as one contributing site.

The Millington Green Historic District's buildings are of two architectural types, 18th-century houses in the Colonial style and early 19th-centuryGreek Revival style buildings. The 18th-century dwellings have five-bay facades, clapboarded exteriors, small-pane sash, and large center chimneys of brick. The three include one each of 2-1/2 full stories, a 2-1/2-story house with a lean-to roof, and a 1-1/2-story house with a gambrel roof. They are oriented with their broad side facing the road.

The Greek Revival buildings in the Millington Green Historic District are all oriented with their gable ends facing the road. The two houses have corner pilasters, full cornice returns treated as entablatures, flush-boarded gables in imitation of Classical pediments, and pilaster-and-lintel entry surrounds. The Tenth District School is also in the Greek Revival style, though with plainer details.

The Millington Green Historic District exhibits a high degree of integrity, both as a whole and in its constituent properties, which for the most part exhibit appropriate window, entryway, siding, and chimney materials. The only modern building in the district, the house at 500 Tater Hill Road, reportedly incorporates an earlier schoolhouse into its design. Because its overall appearance reflects its 1952 construction, the building has been counted as noncontributing.

The Millington Green Historic District is significant because its historic houses, former one-room school, and the green itself recall a once-common type of settlement important to the historical development of New England: the rural crossroads, usually composed of no more than a dozen buildings, that served as a religious, commercial, and social focus for the surrounding agricultural area. Distinct from the main town center, villages such as Millington were small settlements related only to a portion of the larger town. As was typical, Millington grew up around a Congregational meetinghouse, the first of which was built about 1740; the 1832 successor to this structure was destroyed by fire in 1971. However, an associated parsonage, the common land that surrounded the meetinghouse and makes up Millington Green, an 1854 schoolhouse, and numerous houses of the 18th and early 19th century do survive to recall the historic appearance of the village.

The Millington Green Historic District also has architectural significance, since several of its buildings embody the distinctive characteristics of New England Colonial and Greek Revival architecture. Well-preserved, with their small-pane windows, brick chimneys, doorway transoms, and clapboarded exteriors intact, these buildings typify the architecture of the early New England countryside.

The area that would become known as Millington was first settled by Europeans in the early years of the 18th century, with Jonathan Beebe and his family arriving in 1704 from New London. Several families from the surrounding towns soon joined Beebe, and by 1732 the Connecticut General Assembly had granted the residents of Millington the right to establish an ecclesiastical society separate from those in East Haddam and Moodus, to which they had previously belonged. The name Millington, which applied originally to the whole northeast part of the Town of East Haddam, is said to have come from the numerous saw and grist mills located on the several fast-flowing streams nearby. Around 1740 the Second Ecclesiastical Society built its first meetinghouse on the common land that today forms Millington Green. Connecticut law required at least one school in each town or ecclesiastical society, and when Millington built its first schoolhouse, around 1754, it too was located on the green.

The meetinghouse and the school provided the nucleus for subsequent development. Because most of the families from the surrounding area could be expected at least once a week for religious services, the green area was a natural locale for the small commercial enterprises that were established to serve the local community. The David Brainerd House, for example, originally was built as the dwelling house of a 45-acre farm. When James Dixson bought the property in 1765, he added tavern-keeping to his agricultural activities. Dr. Augustus Mather, the owner of the property in the 1790s, also kept a tavern there. Another Millington physician, David Johnson, Jr., ran a tavern in the house at 86 Millington Road.

At least three of the properties on Millington Green at one time included small buildings that housed general stores; none have survived to the present. The store that Ebenezer Dutton had built next to his house in 1766 was moved by Daniel Bulkley to the north end of the green in 1788, near the gambrel-roofed house at 87 Millington Road, where it remained in operation at least until 1849 and perhaps longer. In 1835 Dr. Mather's son Eleazer built a small general store next to his house that continued in business until the 1850s. William H. Cone, who built the house at 82 Millington Road, also ran a store in Millington which, under his son and other subsequent owners, remained in business until about 1919.

Although Millington's taverns and stores probably had as their primary market the local population, the village's present out-of-the-way ambience is somewhat misleading. In the early 19th century, Millington Road was part of a direct route from Goodspeed's Landing on the Connecticut River to Colchester and Lebanon, large inland towns. Although the establishment of the Haddam and Colchester Turnpike in 1815 provided an alternative road, it is likely that Millington continued to receive the advantage of through traffic as well as local business. Millington's sense of being a place was undoubtedly aided by the establishment of a post office in 1831. The post office moved from store to store, a pattern that depended upon the political winds of the times and continued well into the 20th century. Millington probably lost its only real chance at commercial growth in 1868, when plans by local residents for a railroad to connect Colchester and Old Lyme by way of Millington fell apart because of lack of capital.

Millington Green also provided a social focus for families working the farms in the surrounding area. As early as 1732 a trainband was organized in the Second Ecclesiastical Society, and by the time of the Revolutionary War, there were two militia companies in the Millington part of East Haddam. In the 19th century, Millington had a space for meetings and social events known as Cone Hall, located on the second floor of the house at 86 Millington Road. In the 20th century, there were oyster suppers at the Congregational Parsonage hosted by a Ladies Literary Society, dances on the green, and baseball games in which a Millington team played teams from surrounding villages.

Lastly, the presence of a district school contributed to the status of Millington as a central place. The school served East Haddam's Tenth District, an extensive area of outlying farms with Millington Green, or Millington P.O. as it was sometimes known, at its center. Built as a replacement for an earlier schoolhouse in 1854, and enlarged about 1890, the present schoolhouse continued in operation until 1937, when the dozen remaining students were transferred to Moodus. The schoolhouses of Millington must have provided much of the cement bonding the community together. With two dozen students of all ages grouped together in a single room, such district schools provided people with a chance to get to know not only their immediate age cohort, but also neighbors who were both older and younger by several years. The schoolhouse has been maintained as a community center since 1939. Along with the historic houses and the green itself, the schoolhouse helps perpetuate Millington's identity as a separate place with a history stretching back more than two centuries.

Millington's buildings typify the architecture of New England rural areas in the late 18th and early 19th centuries. Those from the 18th century epitomize "plain style" vernacular house building in form, material, and overall simplicity of architectural embellishment. The most typical form of the period — the house set broadside to the road, with a symmetrical five-bay facade and large center chimney — is embodied by these examples, as are the standard exterior materials of clapboarded siding and small-pane windows. Millington's three Colonial-style houses even present the theme with variations: the house at 86 Millington Road is the common 2-1/2-story house, while that at 79 Millington Road has a lean-to roof and 87 Millington Road is a 1-1/2 story gambrel-roofed variant.

The buildings at Millington Green from the period 1830-1860 reflect the numerous changes in American architecture introduced by the Greek Revival. In this period, house builders departed from age-old tradition and turned to an external model for inspiration, the Classical Greek temple, an ideal form that carried connotations of democracy and culture. In addition to incorporating Classical details such as pilasters and entablatures, seen in the district in the entrances of the houses at 82 and 108 Millington Road, many builders adopted a form that would further the resemblance to the temple. This required a shallower pitch to the roof, so as to better reproduce the proportions of the Greek ideal, as well as turning the end of the house so that the gable, now treated as a pediment supported on corner pilasters, could face the road. Finally, the resemblance could be furthered by finishing the gable with matched boards, in imitation of the masonry of a Classical temple's tympanum, a feature seen in two of Millington's three Greek Revival buildings.

The architectural significance of the Millington Green Historic District is sustained by its overall high degree of integrity, with nearly all the buildings exhibiting appropriate window, entryway, siding, and chimney materials.