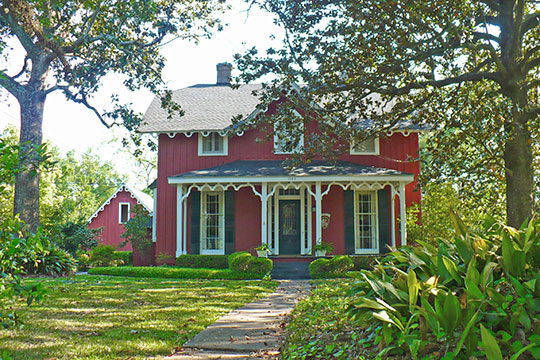 The Old Dauphin Way Historic District was listed on the National Register of Historic Places in 1984. Portions of the content of this web page were adapted from a copy of the original nomination document. [‡]

Mobile's Old Dauphin Way neighborhood is a large, late 19th century/early 20th century suburban neighborhood. The earliest buildings in the district date from the 1830s, 1840s and 1850s and illustrate the influence of the Greek Revival and Egyptian Revival styles on local building types, especially the development of the Gulf Coast Cottage. These buildings are primarily located near the eastern border of the district and in a small grouping of buildings on S. Lafayette Street which have been listed on the National Register of Historic Places since 1976. The majority of the development in this district, however, dates from the 1870s and 1880s through World War I. Within this large grouping are examples of various Victorian styles as well as large numbers of bungalows, vernacular cottages and American Four Squares. The district also includes a number of fine examples of a variety of 20th century Revival styles built around the time of World War II.

While diverse in the representation of architectural styles, the majority of the buildings built in the district between 1830 and World War II are related by elements of building form that transcend strictly stylistic elements. Between 1830 and World War II, the Old Dauphin Way developed as a solidly middle-class residential neighborhood. This residential character is evident in the size and massing of building form that represent adaptations to local climatic considerations. In response to these influences, a group of buildings evolved that maintain a compactness of size, massing and consistent program while responding to a variety of stylistic influences.

Considerations of the local climate encouraged deeply recessed porches, wide overhanging eaves, full-length windows and additional doors for access and ventilation. Other local considerations dictated that buildings be raised above grade on piers. The resulting house had a large proportion of void in the wall surface and had a very dramatic play of light and shadow over the facade. Within the Old Dauphin Way, the visual impact and strength of these patterns and features established a unifying design program incorporating rather than adapting various stylistic influences. The sense of this district, then, is carried by a particular house form—a compact single family detached house, located on a small suburban lot. For the most part the houses abruptly confront the street, moderated only by the domestic scale of the neighborhood and the human scale of the buildings' massing and distinctive facade patterns. Considering the extended period of development and the variety of architectural styles and building types that occurred in the Old Dauphin Way, the harmony and uniformity of such features as scale, setback and massing is most remarkable.

There is an impressive consistency of features that establish the character of the Old Dauphin Way despite the span of years over which development occurred. Typically, the buildings throughout the district are small-scale residential structures with minimal setback and are strictly oriented to the street. Most often they are one-story or story and-a-half single family dwellings, although during the 1880s and 1890s a significant number of larger multiple story late Victorian frame structures were built, and the development of the district during the 20th century was strongly influenced by the nationwide development of what the Old House Journal has called "The American Four Square."

In addition to the small, distinctive cottages and bungalows that constitute the bulk of the district, there are also fine examples of architectural styles loosely defined as 20th century revivals. Included in this group are structures reflecting Spanish and Tudor Revivals as well as American Colonial Revival influences. Most of these houses, built during the latter period of the district's development, reflect the increasingly homogenous character of American architecture around the time of the Second World War as well as the continuing popularity of this residential neighborhood. Nevertheless, they are important to the understanding of the history and development of the Old Dauphin Way in that they continue to exist in the same context with the earlier buildings and define the end of many of those socio-economic and climatic factors that had previously defined the district. Rather than adapting to the local climate, these buildings are representative of the first attempts to control interior environments mechanically. Those elements previously identified as significant—pier foundations, large window and door openings, deep porches and shading roofs—begin to disappear in favor of elements responding directly to new stylistic and social influences.

While the predominantly domestic nature of the district is one of its most important features, several fine examples of apartments and commercial and institutional architecture have been included as significant. These buildings, whether apartments, churches, schools or local businesses, contribute to the sense of neighborhood and the diversity of the street scape, and are therefore most critical to a full understanding of the architectural development and history of the district.

The street pattern in the Old Dauphin Way illustrates the interplay between the traditional American grid plan, seen in Mobile's DeToni Square Historic District, and the picturesque model of city planning as it was developed in the latter part of the 19th century, particularly in designs such as that found in Riverside, Illinois, designed by Frederick Law Olmsted. The mixture of the two influences became known as garden city planning and developed into the basis for the extensive development of the American suburb during the early 20th century.

The first tentative examples of this type of planning are introduced into Mobile in the Old Dauphin Way. The general grid plan of the major streets had been established during the middle years of the 19th century. The overlaying and integration of more picturesque influences occurs in the Old Dauphin Way with the development of Monterey Place with its broad landscaped central median in 1910 and the Fearn Way and Blacklawn Place, 1907-08 and 1914, respectively, that break, if somewhat tentatively, the previously consistent grid pattern of the street plan.

Thus, the street pattern of the Old Dauphin Way represents an acceptance of contemporary planning ideas heralding the development of a new settlement form—the planned suburb. These "modern" ideals about spatial arrangements and lifestyles significantly influenced the later development of the area. What is particularly important about the Old Dauphin Way is that the expression of these ideas, in both planning and architecture, can be seen in the context which fostered their development—the late Victorian, working-class neighborhood.

The designs of the district's buildings consistently illustrate local responses to climate as well as social and economic concerns as Mobile developed from a commercial city following the Civil War to a modern metropolitan area in the 20th century. The key feature in the development of the suburb is the result of an increasingly important middle class— white and blue collar, job holders and job seekers—people whose expectations and opportunities changed drastically during the period from 1870 to 1930. These are the people who have left the record of their concerns and achievements embodied in the buildings and streets of the Old Dauphin Way. The development of the area as an early suburb is clearly important, as is the interpretation of contemporary architectural styles developed by the residents who inhabited the Old Dauphin Way. How they adapted their living spaces to the realities of Mobile's semi-tropical climate and what their image of the American dream was can be readily seen in the homes in the Old Dauphin Way.