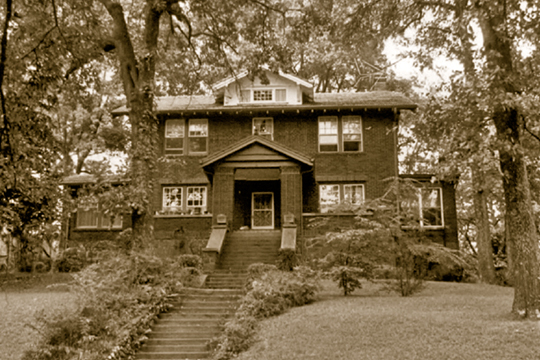 The Red Mountain Suburbs Historic District was listed on the National Register of Historic Places in 1985. Portions of this page were adapted from a copy of the original nomination document. [1]

The Red Mountain Suburbs (1911-1935) are the state's second oldest fully-realized, garden-landscaped residential area. They are situated on the slopes and crest of a mountain which provides spectacular views of the city below. The Red Mountain area is made up of several real estate developments spanning the years between 1911 and 1935. Although each of these developments was originally planned as a separate entity, they collectively embody the same general feeling of design with similar architectural and landscaping features that unify the area.

The overall design is based on a single curving street along the edge of the mountain crest from which a number of winding streets and cul-de-sacs radiate into the surrounding natural woodlands. Along one portion of the street skirting the edge of the crest is a park. Another small circular park near the center of the crest, called Key Circle, provides a formal entrance to the area and is a major intersection for the main access streets. Many of the streets cut deeply into the slopes and the resulting banks are reinforced with high walls of natural stone.

The majority of the houses are the largest and most impressive homes in Alabama. They comprise the finest examples of Tudor, Classical Revival, Dutch Colonial, Spanish Revival, Renaissance Revival, English Cottage and Chateauesque domestic architecture in the state. The houses are situated on large lots, some encompassing several acres, and are shaded by enormous trees, most of which are a part of the natural vegetation of the mountain. Many of the estates retain their original servant and guest houses. The district is comprised of 379 homes with approximately 100 contributing garage buildings and 3 special park features.

The early attention afforded suburban development in Birmingham illustrates the early 20th century economic vitality that was sparked by the industrial success of this new southern city. Displaying a consistent quality in construction and landscaping that is unmatched in Alabama, the Red Mountain Suburbs, located in Birmingham and a small portion of Mountain Brook, reflect an unusually rich sampling of the Birmingham "over-the-mountain" suburban movement during the early 20th century. Shrewdly utilizing the inherent natural beauty of Red Mountain, early real estate developers set a high standard for Birmingham's suburban development with the Red Mountain Suburbs. The result, today, survives as Alabama's second fully realized residential park development containing some of the state's finest domestic architecture and landscaped grounds. The district encompasses four adjoining residential developments: Valley View (platted, 1911); Milner Heights (platted, 1914); Redmont/Altamont Roads (platted c.1914-1919) and Redmont Park (platted 1925). Essentially comprised of an exceptionally rich record of 1920's residential architecture, the developments are integrated by continuous roads and similar landscape designs that feature the natural topography and native foliage of oak, hickory and pine—in the clearings of which are breathtaking views of the city below.