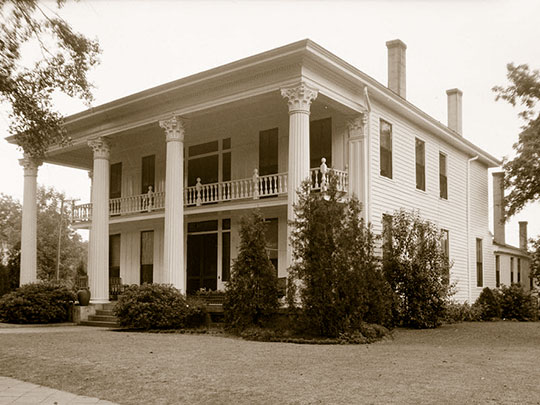 Greenville is situated in the rolling hills of Butler County in the south-central part of Alabama along the Louisville and Nashville railroad line, which was in the late 19th and early 20th centuries the main transportation route between Montgomery and Mobile. The importance of the railroad route has subsequently been replaced by interstate highway 65 running north and south along the northwestern edge of the city and bypassing downtown Greenville. Located in the heart of the cotton belt, Greenville has been the county seat since 1820 and has historically been the main agricultural trade and transportation center for the region. For a brief period in the early 20th century, it was also the site of a small textile mill.

Greenville is laid out on an irregular grid street pattern with the main arteries of travel running east and west, and the secondary thoroughfares running north and south. The railroad cuts diagonally across the city in a northeastern direction.

The main commercial street (Commerce St.) runs east and west directly through the center of town and is terminated at the extreme eastern end by the county courthouse. Commerce Street has not only commercial architecture but also a few older residences, the city hall, the railroad depot and a small city park.

The main residential neighborhoods are scattered to the north and south on either side of Commerce Street. The residential area on the south is locally called Methodist Hill and the residential area to the northeast is referred to as the Baptist Hill neighborhood. The city's most affluent housing is located on the north side of town where the houses, for the most part, are large older homes (c. 1850-c. 1890) built well back from the street on large, tree shaded lots. The middle class housing, built at the turn of century, is on the south side of town. Most of these houses are small cottages and bungalows built close to the street, closely spaced on relatively small lots.

The first settlement of the site that was later to become the town of Greenville is believed to have begun during the early months of 1818. Several families from Georgia, while traveling the Federal Road camped approximately five miles south of Fort Dale (at a site), which according to legend, is the location of Greenville's present city hall. The Georgians settled at this site and founded a village which they named Buttsville in honor of Captain Samuel Butts, who had been killed at the Battle of Calebee in 1814. The land on which the settlement was located had been purchased from the Federal Government in 1818. Some of this land was purchased by land speculators with the intention of sale to incoming settlers.

During 1819 the population of Buttsville tripled as settlers from the upper seaboard southern states were attracted to the area because of fertile land. In January 1819 a group of immigrants from the vicinity of Greenville, South Carolina arrived in Buttsville. Included in these South Carolinians was Eplecaim Farmer, who is purported to have built the first frame house in the town (in early histories of Greenville this house was believed to have been located on the site of the Sycamore stables) which was located on Conecuh Street a short distance N. E. of the courthouse and who also later donated the land for the site of the courthouse.

As more settlers entered the area, from other southern states, the population of the county by 1820 had grown to 835 whites and 570 blacks. During 1819 the settlers petitioned the territorial legislature in Huntsville to create a new county from lands that had been settled in sections of Monroe and Conecuh counties and on December 13, 1819 Butler County was created.

The village of Fort Dale was the first county seat but its tenure as county seat was short lived as a special committee, appointed by the state legislature at Cahaba in 1820 made the recommendation that, because of its central location and larger population, Buttsville should be named the new center of county government. On December 18, 1821, the Legislature authorized the Butler County Commission of Revenue to levy an extra tax on property, the income to be used to finance the construction of a courthouse and jail, to contract for the building's construction and to purchase 160 acres of land for the new county seat.

In May 1822 the site for the town and courthouse was laid off as well as four principal north-south, east-west streets extending from the courthouse site, by a large group of Butler County citizens. Also that same year the South Carolinians over rode the objections of the outnumbered Georgians and petitioned to have the name of the town officially changed to honor Greenville, S.C., their major point of origin. The frame courthouse, located on the site of present courthouse, was shortly afterwards completed and served in this capacity until destroyed by fire, along with the county records, in 1852.