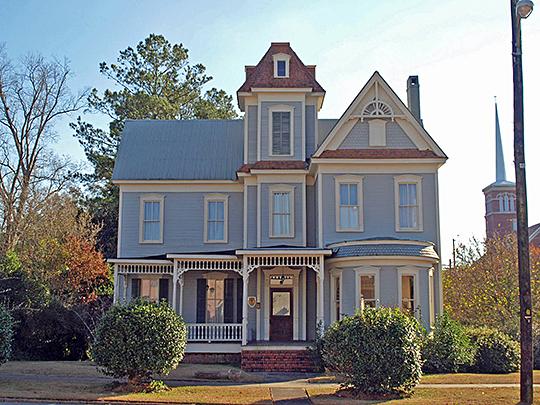 The Commerce Street Residential Historic District was listed on the National Register of Historic Places in 1986. Portions of the content on this web page were adapted from a copy of the nomination documentation. [‡] .

The Commerce Street Residential Historic District represents the last remaining residential housing as well as the final residential development on Commerce Street (206, 212, 218 and 301 East Commerce Street). The first house of the four houses in this district was constructed around 1857 by Judge John K. Henry, who, at this time, operated a general mercantile business and was serving as Circuit Judge in Greenville. The house was later owned by Robert E. Steiner and occupied by L. M. Steiner who operated various commercial establishments in Greenville as well as W. J. Beeland.

Also located on the block was a small home cottage which was built around 1853 by Francis W. Moodie and variously occupied by Mrs. J. F. Drake and Mrs. I. M. P. Ockenden as well as a dwelling occupied by Rev. J. W. Jordan and called the "Father" Jordan House.

In March 1893 the Drake cottage was sold by the Harrison family to W. R. Martin. Mr. Martin, who was the owner of the Greenville Ice Factory which was located directly across Commerce Street and began operation in 1893, started work on his new house in 1894. The original Francis Moodie House was utilized in the construction as part of the rear of the house. The Martin House was completed in February 1895 and was described by the Greenville Advocate at the time of its completion as "a commodious and well appointed structure." The house has been the residence for the Martin family since its completion and is today occupied by the widow of Porter Martin, who operated the Ice Factory, and her sister.

In July 1895 Dr. H. G. Perry purchased the "Father" Jordan house and as the Advocate reported "will erect a two story residence on it as soon as he takes possession." On August 14, 1895 the Advocate reported, "Another old landmark has disappeared in the demolition of the old Jordan residence. Already Dr. Perry has the foundation laid for his new and handsome two story residence. In a very short time this new building will be one of the attractions of Commerce Street." The house, completed in late 1895, was constructed by contractor Sam Morris. Also located on the lot was a brick store building which had been erected around 1890 by J. W. Jordan for use as a grocery store. This building was later occupied by Dr. Perry as an office and later by H. Z. Wllkinson as an office after he purchased the property.

Dr. Perry occupied the house until 1901 when it was sold to Greenville merchant H. Z. Wilkinson. Around 1926 Edward A. Wilkinson purchased the house for other members of the Wilkinson family.

The fourth house in this district is the Steiner-Kendrick House believed to have been constructed in 1846 by Fletcher Johnson. The house was basically block shaped with an ell at the northwest rear and with an outbuilding away from the rear of the house. The house was later owned by Robert E. Steiner during the 1890's. Steiner then sold the house in 1904 to James Drury Flowers of Dothan for twenty-five hundred dollars. Flowers, in turn, gave the house to his daughter and son-in-law, James Erasmus Kendrick, as a wedding gift. Mr. Kendrick made alterations to the house such as new mantles and moldings, attaching the out building to the northeast corner of the rear of the house and the addition of classical columns to the porch. The house has remained in Kendrick family possession since 1904 and is now the residence of Mr. Kendrick's daughter Mary Kendrick Brackin.