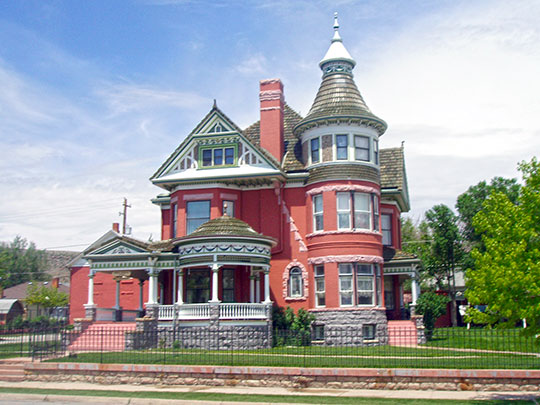 The Rawlins Residential Historic District was listed on the National Register of Historic Places in 1999. Portions of the content on this web page were adapted from a copy of the original nomination document. [‡] .

Constructed primarily between 1885 and the 1930s, the Rawlins residential district reflects the town's unique history. The district represents the natural evolution of the community as it rapidly developed during boom periods followed by periods of economic stagnation. It is also an expression of upper and middle class housing stock popular in the late nineteenth and early twentieth centuries. This neighborhood was first preferred by livestock barons and wealthier citizens, but later served a larger segment of the community because of the decline of several extractive industries and ranching. As fortunes subsided, some property owners sold lots for construction of rental and more modest single-family residences.

Some of the residential district's "sheep aristocracy" included William A. McKay, a Scottish immigrant who lived at 219 West Maple. McKay served on the board of directors of the Stock Growers National Bank and was elected County Commissioner in 1910. William Niland lived at 215 West Spruce and ran Cullen Commercial. Louis H. Larsen built his home at 103 West Spruce and started Larsen's Hardware, which is still in family hands and operated in the downtown until 1996. Gus Larson lived at 320 West Maple and served four years as county commissioner, twelve years on the school board, and twenty-four years on the city council. Edward M. Tierney constructed a home at .119 West Spruce and served as vice president of the Stock Growers National Bank, city trustee and Carbon County treasurer.

In 1903, George Ferris built an opulent Queen Anne mansion at 607 West Maple. Ferris amassed his fortune in copper mining (the Ferris-Haggarty Mine) as well as livestock. He served as a territorial legislator in 1877, convention delegate in 1889, county sheriff from 1888 to 1891, and marshal in 1903. His home is listed individually in the National Register of Historic Places.

Frank A. Hadsell, another sheep scion, served as a state legislator, and his son Kleber Hadsell served as president of the Wyoming Wool Growers Association, city trustee, and on the museum board. Both lived at 401 West Maple. John Mahoney, also a sheep rancher, served as state senator and representative and Carbon County treasurer; he resided at 211 West Spruce. Hans Rasmusson, a successful businessman, built a home at 101 East Pine and served as city treasurer, mayor, and county treasurer. Robert A. Smiley made his fortune in livestock and banking; he lived at 203 West Maple and served as county commissioner and director of the First National Bank. George Bible (715 West Maple) was president of First National Bank. He also invested in mining and was a partner with Anthony Straton (413 West Maple) and Louis Severson (121 West Maple) in the Sandstone Sheep Company. Other sheep men who built homes within the district included John Swanson (203 West Pine), Jacob Johnson (521 First Street), Ole Peterson (414 West Maple), Alfred Grunland (415 West Maple), Isodore Bolton {315 West Maple), Jack Kemp (206 West Maple), Morris Larsen (115 West Maple), and John Engstrom (120 West Maple).

With interests in livestock, mining, banking, commerce and housing, residents of this neighborhood influenced the social, political and economic life of Rawlins. Ranching families were often partners in commercial interests and banking. In turn, bankers and businessmen often expanded into livestock. The First National Bank of Rawlins (1883), Rawlins State Bank (1899, later Rawlins National Bank), and the Stock Growers National Bank (1901) all included prominent sheepmen among their organizers, boards of directors, and officers. William W. Daley, for example, served as an officer of Rawlins State/National Bank for thirty-seven years. Ownership and operation of commercial businesses was practiced by many of these men. For some, such as Henry Rasmusson, business was the primary activity with ranching secondary. Many of the early residents of this district shared the common bonds of commerce, the immigrant experience, politics, success and wealth, and increasingly fraternized together. The first generation, in addition to serving in public office and on church councils, established fraternal organizations such as the Masonic Lodge, the Knights of Columbus, the Elks, the Lions, and the Oddfellows. Young men joined the Owl Club and later followed their fathers, uncles and brothers in leading and maintaining the fraternal organizations. Women participated in volunteer organizations, school groups and organized a county library.

Many professional people not associated with ranching also resided in the Residential District. N.R. Greenfield, onetime president of Rawlins National Bank, was a practicing attorney who also served as mayor and prosecuting attorney for the county, was a member of the state board of law examiners, and was active in the Masons and Elks. His home was at 319 West Maple. Cliff Sunden, a successful investor in the oil industry, established an auto dealership in Rawlins and resided at 311 West Maple. Robert Hoell, a district court judge, resided at 521 West Maple. Lawrence E. Armstrong was a lawyer who also served as justice of the peace and school principal and resided at 103 West Maple.