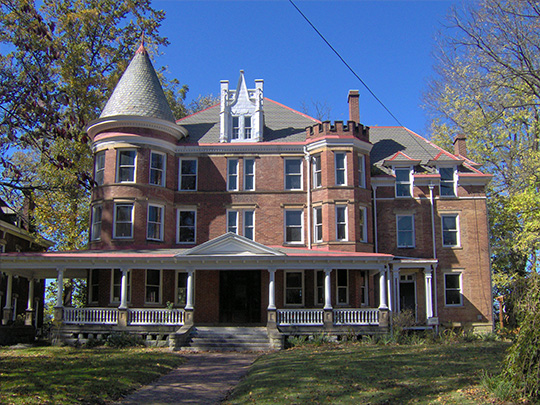 The Julia-Ann Square Historic District was listed on the National Register of Historic Places in 1977. Portions of the content on this web page were adapted from a copy of the original nomination document. [‡] .

In many respects, the history of the evolution and development of the Julia-Ann Square Historic District is the history of the evolution and development of Parkersburg, West Virginia, in microcosm. During the first half of the nineteenth century when the town slowly grew in terms of population, industry and transportation, the area of the Julia-Ann Square Historic District was sparsely settled and little developed. With the end of the Civil War, the opening of West Virginia's pioneering oil and gas industry, the quickened pace of roads, railroads and rivers that had major terminals at Parkersburg, and the influx of service, supportive and auxiliary industry to aid in growth, the city's pace picked up, its population grew, and the need for new housing became pressing. The area just north of town that included Juliana and Ann Streets and their connecting side roads began filling with people who were the leaders of the community: bankers, entrepreneurs, professional persons, religious and educational leaders, ranking political figures, etc. The district was home to many who made the town move, and their influence and well-to-do status was reflected in their neighborhood. They had constructed the best houses of the time, employing the latest styles and using the finest materials. By the time of World War I, Parkersburg was stabilized in many respects, and the Julia-Ann Square area settled down with the town and came, in so many ways, to be one of the best examples — if not the essence — of the middle to upper class housing sections of the city.

Located at the confluence of the Little Kanawha and Ohio rivers, what is now Parkersburg had its antecedents in the last quarter of the eighteenth century and began development as a community somewhat after 1800. Laid out in lots about 1810 and named for Alexander Parker, an early land patentee of the area, the town was incorporated in 1820. Growth was slow during the first half of the nineteenth century, but the establishment of the Staunton and Parkersburg Turnpike and the Northwestern Turnpike (between Winchester and Parkersburg) gave indications that this community along the Ohio River had an important future as a transportation center. When the Northwestern Virginia Railroad began a route from the area of Grafton (on the main line of the Baltimore and Ohio Railroad that extended from Baltimore to Wheeling) to Parkersburg, additional impetus was provided. The line eventually became part of the B&O system, and by the time of the Civil War the importance of these major transportation routes made the town a center of activity. In 1863 its incorporated area again was extended by an act of the legislature, and Parkersburg was officially recognized as a city.

By the end of the great internal war that witnessed the creation of the state of West Virginia as part of its political upheaval, industrial development had made a substantial foothold in one of the key cities of old Virginia's northwest section. The shops of the railroad and the warehouses of the shipping interests were important; timber would make use of its facilities later in the nineteenth century. It was the discovery of vast oil and gas fields to the north, east and south, however, that made the city a center in the early petroleum industry. By 1870 its population was about 5,500; in 1880 it approached 7,000, making Parkersburg the second largest city in the state. As early boom settled to a reasoned development in the oil and gas fields, Parkersburg became a headquarters for developers, refiners, transporters and the myriad of service and supportive industries. Prosperity increased the population, and the movement for new housing was momentous. Quite naturally, the established middle and upper classes of society controlled the town politically, socially and economically. Many of these built homes commensurate with their positions in the developments above Ninth Street, including Stephenson's Addition, Morehead and Neal's Addition, and Deming's Addition along the main thoroughfares of Murdoch Avenue, Ann Street, Juliana Street, Market Street and Avery Street.

When these areas were basically settled and stabilized by about the time of World War I, it was evident that the finer homes were located just north of central city along the streets mentioned above. Many of the houses of this section were constructed before 1875 in a variety of styles, but wealth, prestige and position produced a concentration in late Victorian-era architectural modes and the revivals evident before 1915. Julia-Ann Square Historic District is a distillation of this development; the neighborhood of today is reasonably reflective of the period 1875-1915.

One sees the Queen Anne, Second Empire and Colonial Revival elements in abundance in the Julia-Ann Square Historic District, not necessarily in houses that are stylistically pure, but more often in dwellings that incorporate features of several styles and represent tastes brought into line with local conditions and vernacular renditions. Surely architects from outside the area came to town to practice their profession, for the growing community invited all sorts of people with every variety of qualification. Two architects known to have participated in development at the time and in the styles prevalent in Julia-Ann Square were William Howe Patton and R.H. Adair, but the names of professional architects and builders are not always attached to the homes to which they gave of their talents.

What best might be said of Julia-Ann Square Historic District is that its houses are representative of the time at which it developed. They transcend Parkersburg and present an environment of setting and style that just as easily could have been a neighborhood in Pittsburgh or Cincinnati, even New York City or Philadelphia. High development of the Second Empire can be seen in the home at 904 Juliana Street with its projecting pavilions, finely detailed chimneys, four-story tower with iron cresting and compatible carriage house. The style is wonderfully executed in houses at 1004 and 1110 Ann Street and 910 Juliana Street, and a frame example of a lesser quality may be seen at 944 Juliana Street. The Queen Anne is substantially represented at 918/20, 1008, 1011 and 1203 Ann Street and 1125 Juliana Street. The Colonial Revival has examples at 924 Ann and 1103 Juliana Street. There is a good mixture of Queen Anne and Colonial Revival at 1034 Ann Street and 1040 Juliana Street. Additionally, the house at 1045 Ann Street is a fair sample of Shingle style, that at 1024 Ann Street of Stick style, and the dwelling at 1024 Juliana Street of Eastlake. All in all, the Julia-Ann Square Historic District has elements of most popular styles of 1875-1915, and most are elaborated above the average.

It is only natural that a neighborhood that housed a more-or-less elite group would produce some outstanding individuals, and the Julia-Ann Square Historic District is no exception. Although he was not a product of the district as we now know it and his abilities and accomplishments transcend his city, Peter G. Van Winkle, a noted politician and businessman, lived at the present location of 1209/11 Ann Street for some time (the house now there is much changed since Van Winkle's residence). Mr. Van Winkle was most instrumental and influential in the creation of the new state of West Virginia in 1863, served as one of the first two United States Senators from the new state, and has the distinction (by chance) of being the single vote to prevent the conviction of President Andrew Johnson. Joseph H. Diss Debar, designer of West Virginia's state seal and author of West Virginia Hand-Book and Immigrant's Guide produced in 1870, also lived for a while in the area. Mostly though, the dwellings became the residences of local, regional and state business, professional, political, religious and educational leaders.

One way of establishing the prominence of area residents is to look at a "frozen period" of development to discover the makeup of the Julia-Ann Square Historic District. Julia-Ann Square having become stabilized and settled by the turn-of-the century for the most part, the year 1907 should give a fair representation of its general character.

Along the side streets (Ninth through Thirteenth) resided a receipts teller at First National Bank, three lawyers, a commissioner of Wood County Circuit Court who was also vice president of the Central Banking and Security Company, a man who was president of Brady Construction and Engineering Company while president of Abrams Creek Coal and Coke Company and also chief engineer for the Little Kanawha Syndicate Railroad Lines, a physician, and the cashier of Parkersburg National Bank.

There were obviously a number of residents in lesser positions, both white collar and blue collar, but the above list represents the vast majority of the people living in the area. Additionally, one can see from the number of cooks, domestics and other service people that several families had household workers in their employ. From this it is evident that Julia-Ann Square had become an established neighborhood by 1907, providing housing for many of the city's developers and leaders.

Today the Julia-Ann Square Historic District's character is still pretty much as it was by 1915, especially in the type, number, style, density and quality of its buildings. It is representative of an era, and it is representative of a city. Retention of this character and integrity is commendable, and the residents of the present-day Julia-Ann Square Historic District are justifiably proud of the continuation of their neighborhood.

Parkersburg. Parkersburg, W.Va.: The West Augusta Historical and Genealogical Society, 1958. (Mimeographed reprint of an article by Kate Harris in the Parkersburg Dispatch-News. Feb. 16, 1913).