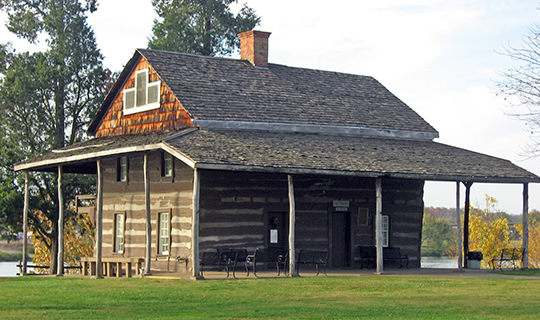 The Point Pleasant Historic District was listed on the National Register of Historic Places in 1985. Portions of the content on this web page were adapted from a copy of the original nomination document. [‡] Adaptation copright © 2013, The Gombach Group.

The Point Pleasant Historic District is significant because it features buildings and structures associated with important periods of American architectural styles and developments in the period 1796-1935; the district is significant also as the locus of events of social, military and political importance in the history of Virginia, West Virginia and the United States.

Point Pleasant was the site of early settlement in the Ohio Valley. Because of the strategic location at the confluence of the Great Kanawha River and the Ohio River, which native Americans are said to have called Tu-Endie-Wei, or "the point between two waters," explorers and later settlers found the level tract attractive as a point of respite or debarkation. Prior to the official authorization of the town of Point Pleasant in 1794 by the Virginia Assembly, several events significant in the history of the Virginia and Ohio Valley frontier are associated with the site, including the Battle of Point Pleasant, (1774) a decisive encounter in Lord Dunmore's War. Among several of the recorded or referenced events are the following:

2. The reported meeting in 1764 of Captain Matthew Arbuckle with French fur traders at a trading post, possibly linked to the French-Shawnee trade.

3. The surveying expedition of George Washington visited the point area on October 31 and November 3, 1770, as Washington claimed land for himself and his officers.

5. The Battle of Point Pleasant was fought on October 10, 1774, between an alliance of Ohio Valley Indians, lead by Chief Cornstalk, and an army of colonial Virginia militia commanded by Lord Dunmore, governor of Virginia. The battle at Point Pleasant was the culmination of tensions between the native inhabitants who were being crowded out of their traditional hunting grounds by settlers pouring across the Allegheny Mountains into the Ohio Valley and western territories. General Andrew Lewis, of Dunmore's army, commanded a separate contingent of about 1,100 of Dunmore's men who met the Indians in a fierce battle that resulted in the narrow defeat of the Indians. The battle was a decisive event in frontier history, because it secured western Virginia and sizable portions of the Ohio Valley for settlement for a number of years thereafter.

6. In 1777, Shawnee Chief Cornstalk, his son Elinipsico, Red Hawk, and the father of Tecumseh, were murdered at Point Pleasant after they were taken hostage. The Indians had come to warn the settlers of possible new hostilities.

The Point Pleasant Historic District is anchored at its south end by Tu-Endie-Wei Park, a site listed in the National Register of Historic Places. A number of stone monuments and bronze markers dot the park's lawn. While disturbances over the years have occurred here, both pre-historic and historic archaeological research potential are considerably promising; no formal excavations have taken place to date [1985]. Within the boundaries of the park, and slightly west of Main Street is the Mansion House; built in 1796, it is the oldest building in the Point Pleasant Historic District. Other significant architecture, principally of a commercial nature, lines both sides of Main Street immediately north of the park.

Point Pleasant's growth and general prosperity have long depended upon the river system. Shipment of goods to and from were greatly facilitated by the two rivers; and after 1840, when a boat-building industry was established, shipyards were a common sight in the vicinity. This tradition survived; in the 20th century construction of metal-hulled craft was an important industry at Point Pleasant yards. With the coming of prosperity, commercial enterprises increased in numbers along Main Street.

The largest percentage of commercial architecture in the Point Pleasant Historic District dates from the late 19th century. The buildings, for the most part, are of brick and stone and feature enriched broad cornices, brick corbeling, and pressed metal ornaments favored by builders who chose Renaissance Revival, Romanesque, and Italianate styles for their commissions. Noteworthy examples of Neo-Classical architecture also are found along Main Street. The limestone finished post office building, with its monumental tetra style portico in antis, is an excellent example of the Point Pleasant early 20th-century classical idiom.

The Main Street residential area features a parade of 19th-century architectural landmarks that were built for the prosperous town merchants and businessmen. The significance of this concentration of resources is measured by the variety and well-preserved character of styles ranging from the Italianate, to the Eastlake and Queen Anne.

The Point Pleasant Historic District is the focus of significant events, such as the decisive Battle of Point Pleasant, but also encompasses significant concentrations of commercial and residential architecture that date from all periods of the city's development. These cultural resources are the center of the community's increasing awareness of the historic built environment as Point Pleasant begins to plan for a serious restoration effort.

Lewis, Virgil A. History of the Battle of Point Pleasant (The Tribune Publishing Company 1909).