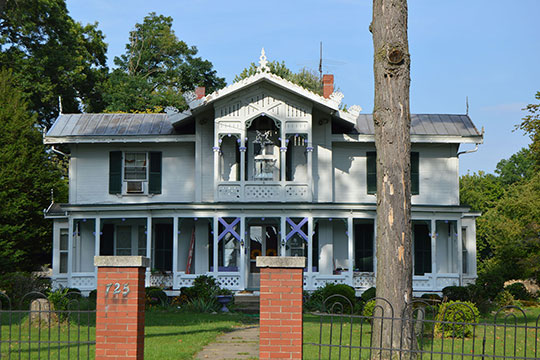 The 9th Street West Historic District was listed on the National Register of Historic Places in 1980. Portions of the content on this web page were adapted from a copy of the original nomination document. [‡] .

The 9th Street West Historic District in Huntington, Cabell County, West Virginia, is significant because it encompasses the well-preserved core of a late nineteenth century Victorian Huntington subdivision called St. Cloud. The community developed on land adjacent to the house of Captain H. Chester Parsons, a figure prominent in the settlement of Huntington, now West Virginia's largest city. Other locally significant citizens built houses in the village along the principal thoroughfare called "Park Street of St. Cloud." Though the St. Cloud enclave extended beyond the Park Street — now 9th Street West — boundaries, its center and early growth patterns emerged from residential development along what is now 9th Street West, between Madison and Jefferson Avenues. Significantly, the nineteenth-century ambiance of the 9th Street West Historic District survives. Victorian frame houses, a park-like setting, brick streets and other environmental features reflect the residential tastes and fashions of what was essentially a Victorian Huntington streetcar suburb. Its residents were prominent in Huntington civic and business affairs, a fact attested to by the addresses of those who served in public office or who owned interests in Huntington West End factories or mills.

St. Cloud was founded in 1874 on lands located roughly between present day 5th Street West and 11th Street West. The community retained its own identity as an unincorporated subdivision west of Huntington until 1893 when the newly incorporated Central City, a town founded by the Huntington and Kenova Land Development Company, absorbed its territory. Central City, with a turn-of-the-century population of about 1500, was itself amalgamated when in 1909 Huntington extended its boundary westward.

H. Chester Parsons (1840-94), a native of St. Albans, Vermont, was the most prominent resident of St. Cloud. He arrived in Huntington in 1870 and built the house which stands at 725 9th Street West. Parsons served as a director and local attorney for the Chesapeake and Ohio Railroad, a company which in 1873 successfully linked the Ohio Valley with eastern Virginia. Parsons was aboard the first train that reached Huntington on January 29,1873. Among items carried by this train was a barrel of water from the James River at Richmond which was to be poured into the Ohio River as a ceremonial gesture linking East and West. Because the C&O Railroad played such a large role in the founding of Huntington, and because Captain Parsons was a local official of the railroad, the company and its officers assumed an important local position of leadership. The lawn of the house at 725 Ninth Street West was the scene of occasional parties given by Parsons to entertain railroad company executives.

As the western terminus of the C&O Railroad in 1873, Huntington rapidly became an important coal shipping point and center of a developing oil and gas industry. Huntington's importance, however, would not have been realized had not the decision of Collis P. Huntington (1821-1900) determined the site and later platting of Huntington as a center of his Ohio Valley rail interests. It will be remembered that C.P. Huntington who promoted the Central Pacific transcontinental railroad (1869), and later extended the C&O lines to link with the Southern Pacific, nominated "H. Chester Parsons, Esq.," director of the Huntington C&O operations.

Other important residents of the 9th Street West Historic District included expanded family and descendants of the first Parsons of St. Cloud. Warren J. Parsons (1846-1925), a brother of H. Chester, occupied the house at 725 9th Street West in the late 1870's after Captain Parsons moved to Virginia. An active member of the Congregational Church and a realtor, Warren Parsons was often observed on Huntington streets driving his carriage and "looking for all the world like the typical English squire." John Weeks Parsons (1873-1918), a son of Warren, commissioned the house at 857 Jefferson Avenue c.1904. John studied dentistry at the turn-of-the-century and established the first orthodontic practice in West Virginia in 1904. John Parsons was active in local and state dental societies and contributed articles on dental subjects to national journals. The house at 723 9th Street West was built n 1933 for Darwin Ensign, a descendant of the Ensigns who in 1872 founded the Ensign Manufacturing Company which became part of the American Car and Foundry Company in 1899. Mrs. Ensign (Janet Parsons Ensign) is a granddaughter of Warren J. Parsons.

An important businessman of 9th Street West was D.E. Abbott. D.E. Abbott came to Huntington in 1872 from Vermont with a pair of horses owned by H. Chester Parsons. The young man drove the horses from New England and spent his first days in Huntington at the home of Captain Parsons. In later years Abbott became one of Huntington's greatest citizens when his picture-enlarging and framing business, D.E. Abbott and Company, grew into one of the largest industries of its type in the United States. Abbott acquired the Parsons home at 725 9th Street West and resided there for the remainder of his life.

Ambiance of Victorian quality has survived in the neighborhood of 9th Street West. Park-like settings along the east side of the street, reminiscent of twentieth century suburbs; brick street paving and cast-iron fencing lend unique character to the district. Complementing the older houses are several of later construction, such as the Ensign House at 723 9th Street West. The Ensign House retains the scale, setback, and wooded setting of its neighbors, but represents in its different styling an exceptional contribution to the architectural evolution of the neighborhood. The Moderne-style house combines Regency elements in a design that is one of the most significant examples of 1930's period architecture in Huntington. Adding to the residence's significance is its steel frame structural system and renown as an example of an exhibition house produced from plans of the "Home and Industrial Arts Group" at the Century of Progress (Chicago Worlds Fair, 1933).