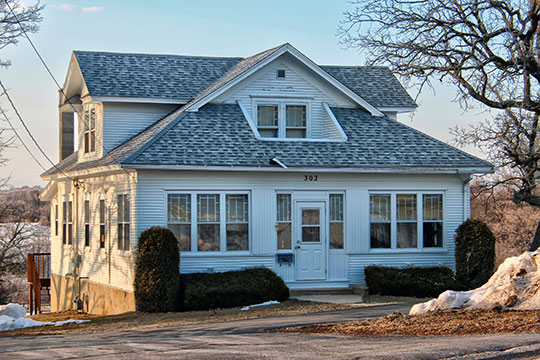 The village of Barneveld is located in the Driftless Area, the southwestern corner of Wisconsin that was not reached by the glaciers that carved away the rough edges of most of the state. Barneveld is sited on the Military Ridge, a geologic formation running east and west across Iowa County. This ridge has carried a full range of transportation functions: serving as an Indian trail, a military road, a railway right-of-way, a state highway, and finally, a bicycle trail. This high plain was a natural site for a village, and after the railway came through in 1881, Barneveld developed very quickly.

Like many villages that owe their development to the railway, the streets of Barneveld were platted parallel to the railroad tracks, which cut a block-wide right-of-way diagonally from northeast to southwest. A commercial district developed along Orbison Street to the south and Main Street to the north of the right-of-way, and residences were distributed on both sides of the tracks. Typical of small towns everywhere, each building reflected the time of its construction, and for the most part the village consisted of a mix of unpretentious vernacular buildings spanning a period of one hundred years. Fires in 1885 and 1891 required the rebuilding of some of the original wooden commercial buildings. Others were later replaced by more permanent brick or masonry block structures built to meet twentieth century needs.

The Village of Barneveld is located in Iowa County in southwestern Wisconsin. This corner of the state was the first area to attract white settlers, who began coming in the late 1820s to mine the lead ore. Agriculture began to become important after 1840, as the lead boom declined. The village is set on a high ridge, known now as the Military Ridge State Park Trail. First used by Indians traversing the state on foot, the ridge trail was also convenient for the first white settlers. After the Black Hawk War of 1832, the ridge was selected by the U.S. Army as the most advantageous route for a road between Fort Crawford (Prairie du Chien) and Fort Winnebago (Portage). At either end it connected with roads to Fort Howard (Green Bay) and Galena, Illinois.

The land which is now Barneveld was first entered in the Federal Land Office in 1853 to Benjamin F. Evans. In less than a year's time, Evans had sold the land to David Simpson, who had brought his family from Prince Edward Island. Simpson built a house [not extant] which also served as a guest house for travelers, and became the first postmaster of Jennieton, a few miles west of Barneveld. In 1881, when the Chicago and Northwestern Railroad Company was extending its line along the Military Ridge, Simpson offered the right-of-way through his property for one dollar if the company would build a depot near his home. The bargain was struck, and Simpson platted two blocks of his property south of the rail line between Orbison and Douglas, Kenzie and Garfield Streets. The lots sold quickly, and by June 1881, a carpenter shop had been built and a store and hotel were underway. By the end of July the town of Simpsonville could boast a blacksmith shop, a dress goods and millinery store, a lumber yard, a warehouse, and several new houses. At the suggestion of railway surveyor, Mr. Orbison, the name of the town was changed to Barneveld, after his home town in Holland.

Barneveld's progress was typical of small Wisconsin railroad towns. A branch office of the Dodgeville Chronicle was opened in 1882. A post office and a school were added in 1883. By the end of the century there were four churches: Methodist, Congregational, Baptist, and Catholic. Two fraternal organizations, the Odd Fellows and Good Templars, were also chartered before the turn of the century. The village was incorporated in 1906. The village streets were paved in the 1930s. A volunteer fire department was organized in 1937, at about the same time the village water system was installed. After its initial growth surge, the population of the village has been fairly stable, from 400 in 1891 to 526 in 1976, to 596 at present.