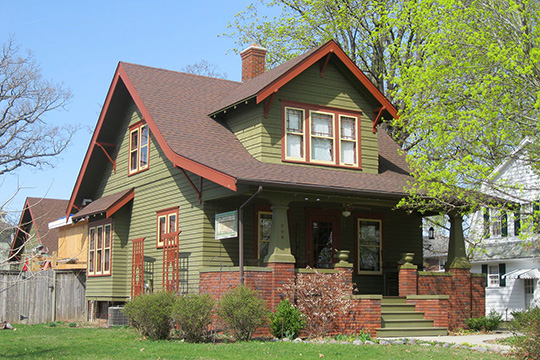 The East Park Historic District was listed on the National Register of Historic Places in 2003. Portions of the content of this web page were adapted from a copy of the original nomination document. [‡]

The East Park Historic District is an intact and visually distinct grouping of small to medium-sized houses, facing East Park, united by physical development, and erected between 1913 and 1952. Two-thirds the homes were built between 1913 and 1921, and more than half of those are Bungalow, Craftsman, or Craftsman-influenced in style, creating visual cohesion in the district. The significance of the East Park Historic District lies in how the homes relate to one another in style, age and scale, and their orientation to East Park. The level of integrity of the individual properties varies in the district, but is generally very good.

The tracks of the former Chicago, Milwaukee and St. Paul Railroad are located downhill from the East Side Historic District, south and west of the neighborhood. A scattering of industrial buildings are found in the railroad corridor.

The district is made up of small to medium-sized, single-family residences on modest lots, facing East Park. The scale and orientation of the contributing buildings, the narrow streets, the park's sweeping lawn studded with mature trees, and the topography that visually separates the district both from the industrial area to the south and west, and from the houses that face South Academy Street, combine to make the district feel both secluded and welcoming, pedestrian- and family-friendly, and evoke an earlier time.

The most distinguished Bungalow in the district is the Gilbertson House at 708 Park Street (photo). Erected in 1919, it is of frame construction, finished with clapboards and resting on a brick-veneered foundation. Wood shingles appear in the gable ends and on the front-gabled dormer that perches on the side-gabled roof. The full-facade, cutaway porch exhibits a foundation and closed rails of brick, with projecting brick piers supporting battered, wooden posts and concrete urns. Double-hung sash windows with a multipane, Craftsman upper sash light the house.

East Park (1879/1903) is not a designed landscape. It is a four acre parcel with a grass lawn and mature trees. Equipment for both passive and active recreation is arranged unobtrusively on the park grounds, and includes a playground, a basketball hoop, tennis courts and a park shelter with restrooms. The non-contributing park shelter does not detract from the historic character of East Park.

Several of the houses in the district have been altered with aluminum or asbestos siding. However, all of the sided houses retain their original form, most of their historic windows, and decorative details that identify their architectural mode. Overall, the East Park Historic District retains very good integrity.

No new construction took place in the East Side Historic District during World War I. After the war, home-building resumed, adding seven more dwellings to the district between 1919 and 1921. All are Bungalow or Craftsman-influenced in appearance. In 1919, the house at 708 Park Street was constructed for Elling and Bertha Gilbertson, a retired couple. The residence at 208 South Lynn Street was erected for Carl and Tena Hanson in 1921. Carl Hanson was a laborer. The Hub City Construction Company built the house at 308 South Lynn Street on speculation in 1921, retaining ownership and apparently renting the house until at least 1925. The residence at 724 Park Street was constructed for Ted Jacobson in 1921. Although his occupation has not been identified, the second owner, Peter Lee, who lived in the house from at least 1925 until at least 1935, worked as a laborer. Carl and Trena Hoel had the house at 800 Park Street built in 1921. Carl Hoel was a merchant, making the Hoels one of the more well-to-do families in the district. The home at 808 Park Street was constructed for Mrs. Ole Simonson, a widow, in 1921. John and Marie Johnson had the house at 816 Park Street erected in 1921. John Johnson was employed in the building industry as a moulder. By the end of 1921, houses had been constructed on two-thirds of the lots in the East Park Historic District.