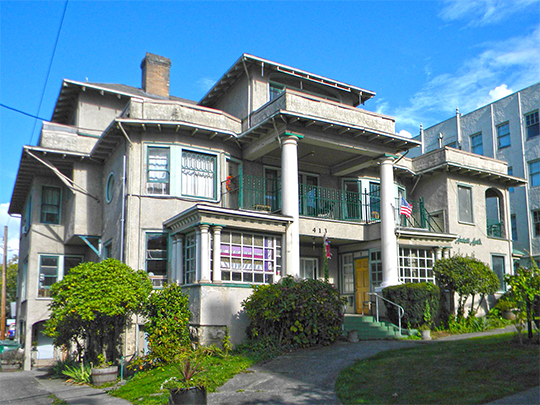 The Dr. William H. & Frances C. Axtell House was listed on the National Register of Historic Places in 2011. Portions of the content of this web page were adapted from a copy of the original nomination document. [‡]

The Dr. William H. & Frances C. Axtell House (also known as the Axtell Apartments) is located just south of downtown Bellingham, Washington at 413 East Maple Street. The home faces towards the southwest on a slightly sloping lot adjacent to an alley on one side and a three story apartment on the other side. The sloping site allows for a daylight basement on two elevations. Landscaping on site is limited to a shallow grass lawn, some foundation plantings and a large evergreen tree on the far south corner of the lot. The rear of the lot has been graveled for a parking area.

The house reflects a conversion of a clapboard-sided 2-1/2 story Classical Revival style home into a stucco clad apartment complex. The transformation into an apartment house was completed during the historic period of significance by the original owner in 1926. Based on historic images, elements that defined the original character of the home remained after the conversion into apartments. This alteration included a reworking of the porch, an addition to the east and west facades, as well as a new stucco veneer.

The original house, influenced by the American Foursquare design motif was popular in Bellingham when the home was constructed in 1902. In its original form, the dwelling was a 45 foot square 2-1/2 story box with a hipped roof, four small dormers, a full length front porch, and a small widow's walk. Groups of Doric style columns highlighted the front entry as well as two story bay windows.

Today the property boasts a heavy textured stucco exterior with a variety of roofs, projections and porches. Vestiges of the original porch were retained on the ends (but enclosed with multi-light windows), the central portion of the porch was cut and received a two story portico holding up a small balcony for a 3rd story apartment. A distinct pent roof, supported by modillions, surrounds the top of the second floor and defines a short parapet wall hiding a flat roof deck. The main asphalt-covered hip roof of the home is visible from a distance, but the original small hip roof dormers were replaced with larger hip roof units to accommodate larger windows and doors for balcony access. These dormers have exposed rafter tails. A shingle brick chimney with a corbeled top can be found on the southern slope. All windows on the home are original wood units in a variety of shapes and sizes. Most are one-over-one units, however multi-pane fixed units can be found on the porch, and lozenge style cottage type units are found in the two-story bay windows on the main facade. A single round window is found on the second floor of the west facade.

The original home has a coursed stone foundation, while the additions are concrete. The east facade was extended approximately eight feet outward and has an irregular footprint with two entrances and a second story balcony highlighted by arched openings.

Inside the home was divided into 8 apartment units in 1926, however many of home's original interior elements, such as moldings, trim, fireplace surround and flooring remain. The original "grandeur of the rooms" is echoed in the current high ceilings, and spacious apartment on the ground floor apartment (unit 8) which was originally occupied by Frances Axtell. Despite the 1926 modifications, relatives note that this space looks much as it did when the home boasted a "parlor where horse hair formal furniture and an upright piano" were at the service of Frances Axtell's "numerous committees."

Also inside are two original fireplaces reportedly carved by Frances Axtell. All of the apartments retain their original hardwood flooring, window and door trim and many plumbing and lighting fixtures. Two sets of heavy wooden doors which slide into the walls are preserved in the apartments. Antique leaded and beveled windows remain in the rooms on the first two floors. The third story apartments reflect Axtell's decision to add a modern, Art Deco flair to the converted apartments achieved by enlarging the dormers and replacing their windows with floor to ceiling wood framed swiveled window panels.

For her 1926 conversion, Frances Axtell, is remembered by her daughter as an "avid re-builder" and creator of "clever apartments." She ambitiously added a two story front portico, enclosed the sun porch, sealed off the front entry and servants' staircases, and constructed two one-floor extensions from the front bay windows. Axtell also replaced the wood stairs leading to the front entrance with cement steps and created a basement apartment from the large basement which had originally served as the home's laundry equipped with a big furnace supplied with wood delivered by the nearby Bloedel-Donovan Mills.