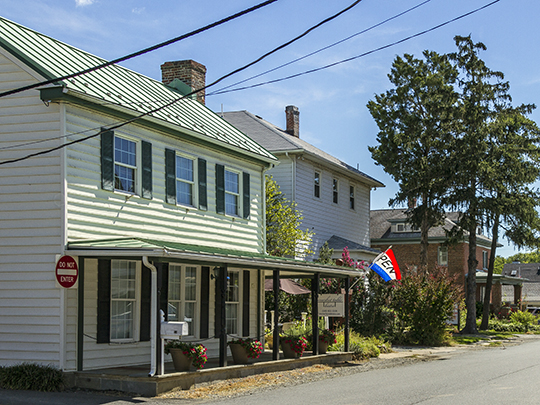 Lovettsville boasts some of the strongest German ties of any Virginia town and the only surviving German community east of the Blue Ridge. Its German origins have played a large role in defining its history, particularly its nearly unique position during the Civil War. The immigration of Germans to the North American continent began in the early decades of the 18th century, and their presence in Virginia was very important in the early history of the colony and its settlement. In the case of Lovettsville, it was not until the middle of the 18th century that a group of German immigrants traveling south from Pennsylvania settled in an area of present-day northern Loudoun County that became known as "The German Settlement." One of the earliest chronicles of the German migration to the Lovettsville area was penned in 1896 by Briscoe Goodhart in an article entitled "The German Settlement: Early History of this Interesting Section of Loudoun County," for the Telephone, a Loudoun County periodical. Goodhart declared that the people who populated the German Settlement came from the Palatine state of Germany about 1727. He goes on to say that "in an organized capacity to become permanent residents" Germans settled circa 1732. Later historians claim the date closer to 1742 when William Wenner organized a congregation, later known as German Reformed. Klaus Wust, one of the leading scholars considering the German presence in America, states that the "heart of German settlement in Virginia" was in the Shenandoah Valley. The only other sizable German settlement east of the Blue Ridge was at Germantown in present day Fauquier County and in northern Loudoun County. No 18th- or 19th-century above-ground resources survive at Germantown. According to Wust, "In 1780 Moravian bishop John Frederick Reichel remarked about Germantown in Fauquier, 'when one is in the town, one asks where the town is.'" He goes on to say that other German enclaves outside the Shenandoah Valley virtually disappeared as their populations were absorbed "by their English-speaking surroundings."

Lovettsville was early on designated a post office when it was still known as Newtown in 1823. By 1828, the official post office name had been changed to Lovettsville. Jonathan Wenner, whose German name was long associated with the town, served as postmaster for 10 years. The surviving dwellings from that period include the house at 30 East Broad Way, built circa 1830, a property associated with both the Householder and the Eamick families. The family of Jacob Householder, a German family identified by Briscoe Goodhart in his 1896 essay, lived in the Lovettsville area in the 1850s and his name was long associated with this part of the county.