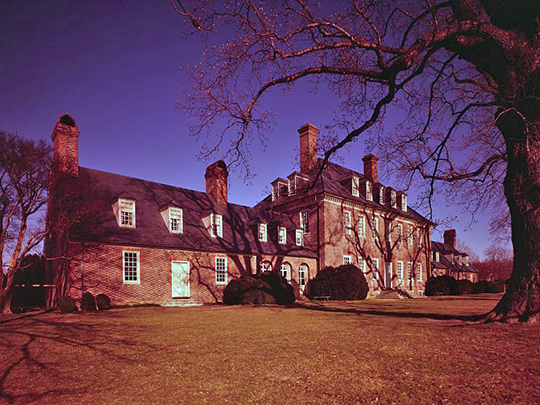 Williamsburg, capital of Virginia from 1699 to 1780 and now the showplace among Colonial restorations, is spread upon a ridge in the peninsula between the James and York Rivers. Queen's Creek and College Creek (called in early days Archer's Hope) partly encircle the city. Round about, fields roll toward the water or stretch inland to meet pine woods. On the outskirts are new houses of brick or wood. East-West Duke of Gloucester Street, wide, straight, and tree-shaded, bisects the little city from the college to the capitol.

Eighteenth-century Williamsburg, lately a straggling, dusty ghost town, is today a lively reincarnation of the busy and important Colonial capital. Bordering deep sidewalks, with benches at the curbs, are shops behind faces of eighteenth-century design and signs in flowing script. Set close to the street, most of the dwellings have green shutters and gambrel or gabled roofs pierced by a line of dormer windows. Those of frame are small, with vast single-buttressed brick chimneys; a few, built of brick, are large and formally designed, while many have rambling additions. But whether of pink brick or white clapboard they appear old in pattern only. In the interiors, paneling and wainscoting are freshly painted or of polished natural woods, and walls are tinted 'Williamsburg blue' or covered with fresh paper. Gardens, where old-fashioned flowers bloom from early spring till late fall, have great boxwood trees or hedges of dwarf box planted in intricate patterns.

The past constitutes Williamsburg's livelihood, its present, and its future. The colonists' homes and taverns, where all classes of Virginians lived and assembled, and the palace and its gardens, where royal governors surrounded themselves with such splendor as would make their 'barbarous exile' more endurable, illustrate like a picture book the long fight waged by liberty-loving people against privileged aristocracy. Today boys and girls in college clothes and tourists hurrying from house to house contrast ludicrously with Negro guides and attendants in eighteenth-century costumes. Williamsburg—without patina—is the only Colonial city that appears today much as it did before the Revolution. Old and new buildings, in about equal proportion, glisten with pristine freshness; and now, as always, handicrafts represent the only local industries.

Incorporated in 1722, Williamsburg became the political and educational center of Virginia and the scene of the most 'fashionable' social life in Colonial America. During legislative sessions substantial planters emerged from rural isolation to occupy 'town houses,' comfortable rooms at inn or tavern, or to lodge with friends. Sycophants and adventurers swelled the throng. English visitors testified that balls, races, fairs, and other entertainment composed a 'season' not greatly inferior to London's in amusement and elegance.

The tranquility of this scene was broken in 1765 when Patrick Henry, undeterred by cries of 'Treason!' incited the burgesses to pass resolutions against the Stamp Act. Here in 1773 were developed the inter-colonial activities of a committee of correspondence that grew out of the standing committee originated in 1759 to communicate with the colony's London agents. The house of burgesses, meeting in Williamsburg in 1774, called the First Continental Congress. The First Virginia Convention, indirectly resulting from closure of the port of Boston, met at Williamsburg in the summer of 1774 to elect delegates to a general Colonial congress. Fear of Lord Dunmore and of a British man-of-war near by in the York River caused the next three conventions to meet in Richmond. The fifth and most noted Virginia Convention met in Williamsburg on May 6, 1776, and began the open move toward American freedom by declaring Virginia an independent commonwealth and by instructing the Virginia delegates to the Second Continental Congress to propose American independence.

Williamsburg began to decline when the capital was moved to Richmond in 1780 to escape the invading British. In 1781, before and during the Siege of Yorktown, Williamsburg was headquarters first of the British and then of the Continental and French forces. From the capitulation of Cornwallis in October until the following summer the French army was quartered near by. Though these closing events of the war temporarily animated Williamsburg, the population dwindled from more than 2,000 in 1779 to about 1,200 in 1795, and in 1804 the former capital was described as very 'decayed.' Between 1770 and 1790 the Reverend Mr. Moses, who seems to have been the first Negro preacher in Virginia, had organized the Williamsburg Baptist Church, undaunted by opposition that was at times physical. The church, its membership recruited almost entirely from the city's Negroes, survived under the Reverend Gowan Pamphlet and other Moses proteges.

Except for brief revivals brought about by two wars, Williamsburg dozed for a century and a half as shopping center for the surrounding country. Many residents owned small farms near by and managed to live with a minimum of enterprise. The Battle of Williamsburg took place on May 5, 1862, when a Union corps engaged Confederates retreating from Yorktown toward Richmond. The city suffered at the hands of the Union troops, and reached the nadir of its fortunes when the College of William and Mary was closed in 1881. After 1889, when the college reopened, a slow recovery began and continued until the little community was aroused suddenly in 1917 by the location on its outskirts of a munitions factory with nearly 15,000 workers. Hastily constructed cheap buildings disfigured the Colonial city.

In its newborn ugliness Williamsburg dozed again. In 1926 John D. Rockefeller, Jr., came to Williamsburg at the invitation of Dr. W.A.R. Goodwin, who had been responsible for the restoration of Bruton Paris Church, of which he was rector, and of the Wythe House. Mr. Rockefeller was enthusiastic over Dr. Goodwin's plan for restoring the city to its eighteenth-century appearance. On Mr. Rockefeller's authorization most of the property in the Colonial area was acquired by Colonial Williamsburg, Inc., and within a decade most of the research and restoration was completed. Research covered Colonial documents and records in libraries, museums, and family archives in America, England, and France. Buildings totaling 459 were torn down, 91 of the Colonial period rebuilt, 67 restored, and a new shopping center in Colonial style was provided.