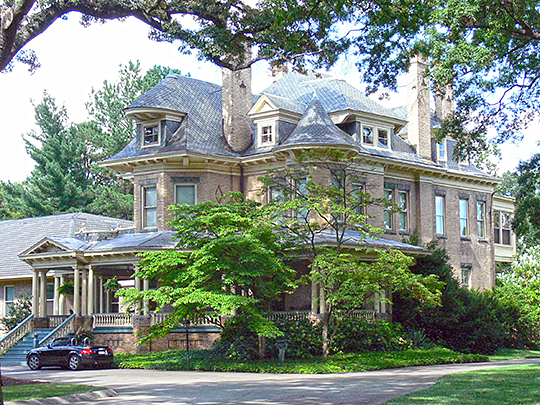 Holly Lawn (4015 Hermitage Rd.) was listed on the National Register of Historic Places in 1982. Portions of the content on this web page were adapted from a copy of the original nomination document. [‡] Holly Lawn is located in the (Hermitage Road Historic District (listed 2006) and its design is attributed to the architect D. Wiley Anderson (1864-1940).

Holly Lawn is located at 4015 Hermitage Road, to the west of the Ginter Park neighborhood of the city of Richmond. The 2-1/2 story residence was erected in buff-colored, stretcher-bond brick in 1901. Its irregular roof line and variety of geometric forms make it a particularly rich example of Queen Anne architecture. The house is well preserved and well maintained and possesses most of its original interior trim. Following its acquisition by the Richmond Council of Garden Clubs, a low auditorium was added to the north side of the building in 1973.

Richmond's North Side is particularly rich in trees and shrubbery, and the front grounds of Holly Lawn are no exception. The house is set back from the street on a spacious lot amidst oak and holly trees and evergreen shrubs that contrast with the light brick walls. The facade (west) has a one-story porch that extends to the north and south elevations. The porch has unfluted columns on stone plinths and brick pedestals and a wooden balustrade with turned balusters. The porch is covered by a shed roof with a pediment at the main entrance. Modillions embellish the porch's eaves. The main entrance consists of a transom-light doorway that retains its original glass and wood-paneled door. The transom is topped by a stone lintel. The rear (east) entrance is located within a two-story entrance tower topped by a pyramidal roof. Access is gained through three round-arch openings that lead to a doorway similar in treatment to that found on the front (west) elevation. The principal windows consist of rectangular openings with 1/1 hung-sash topped by rough-hewn stone lintels. The north elevation has round, half-round, and square openings. The hipped roof is broken by gable-, hipped-, and conical-roofed dormers with square casement windows. The roof line is further enhanced by a conical roof that covers a corner tower and also by a number of chimney stacks. The eaves have both brackets and modillions. The exterior wall surface is embellished with terra-cotta moldings worked in geometric panels. The main roof is covered by imbricated-patterned slate; the porch roof is covered with sheet metal.

Holly Lawn has a corner hall plan where the main stair is located. The open-well stair is the most elaborate interior feature and has turned balusters, a molded handrail and a carved newel. The newel has applied Ionic pilasters and carved acanthus leaves. The original finial, most likely an urn, has been removed. Located between the first and second floors, the stair landing is distinguished by a semicircular balcony that has turned balusters and a molded handrail. In addition to the hall, the principal rooms on the first floor are the library, parlor, and dining room. The library was originally a small sitting room and has a carved oak mantel. The windows and doorways have molded architrave trim with turned corner blocks. The original louvered interior shutters, a typical feature of houses of this period, have been retained. A plaster ceiling cornice further embellishes the room. The parlor mantel and ceiling are similarly treated. The dining room has a mantel and mirrored over-mantel with a glazed tile surround. The second floor consists of bedchambers, and the mantels are similar in treatment to those found on the first floor. In all probability the mantels were made by the Richmond Wood Working Company, being similar to those illustrated in the company's 1902 catalogue. Decorative cast-metal fireplace coverings with garlands, swags, and figures are retained/throughout the house. A round arch distinguishes two former master bedrooms on the second floor. The rear first-floor kitchen has been modernized so as to continue to serve its intended use. The pantry retains its extensive storage closets and cupboards. The servant's quarters now serve as an apartment.

The addition of 1973 consists of a one-story annex constructed of buff-colored brick. It is connected to the north wall of the residence by a small hyphen which serves as a hall. The addition contains the Garden Club's meeting room. The rear (east) yard has been turned into a parking lot.

Situated among clusters of mature oak and holly trees in what formerly was a turn-of-the-century streetcar suburb of Richmond, Holly Lawn is a superb Queen Anne-style residence that is representative of the best suburban architecture of its period. Built in 1901 for Andrew Bierne Blair, a prominent Richmond insurance agent, the house is more closely associated with Dr. Ennion G. Williams, who made Holly Lawn his residence for nearly twenty years following his appointment as the Commonwealth's first Commissioner of Public Health in 1908. Williams was a figure of national importance in the public health movement of the progressive era. Under his direction, Virginia's health board ranked among the first such departments in the country to apply scientific knowledge to the improvement of public hygiene by a system of prevention as well as cure.

With its irregularity of plan and massing, Holly Lawn is a prime example of a fully developed Queen Anne residence, representing a striking departure from the more regular town houses then being built within the city proper. More typical of Richmond housing is the prominence given to Holly Lawn's porch, a traditionally pronounced feature of Southern architecture, associated with Richmond's dwellings from the early 19th century. The interior woodwork appears to be a product of the Richmond Wood Working Company, as it parallels plates in the company's 1902 catalogue. The house stands in a turn-of-the-century suburb of Richmond that was annexed to the city in 1914. Associated with the development of Sherwood Park to the south and Ginter Park to the east, the area was described enthusiastically by Douglas Taylor in a promotional booklet entitled Suburban Reflections (ca. 1901): "In all Virginia ... there could not be found a more beautiful section than that embraced in the northwestern suburbs of the city of Richmond, or more particularly in the section adjacent to Brook Turnpike and Hermitage Road."[1] The real estate agent mentions the "new handsome residence of Mr. A. Bierne Blair" in his discussion of picturesque houses in the vicinity of Sherwood Park and the Union Theological Seminary.

In 1902 the Blairs sold the spacious house to Charles B. Cooke of St. Louis. The George Gibson family occupied the house between 1907 and 1909; not until 1913 did the dwelling become the home of the Ennion G. Williams family, with whom it is most closely associated. According to family members, Dr. Williams gave the property its name because of the large number of holly trees scattered on its lawn.

Ennion G. Williams was born in 1874 into a prominent Richmond business family. According to his sister, Mrs. Maria W. Williams, writing for her grandchildren in 1953, Dr. Williams decided to pursue medicine when quite young. He received his education at the University of Virginia and spent several years in New York, Philadelphia, and Munich, Germany, where he became particularly interested in preventive medicine. At a time when progressive Virginians were just beginning to recognize the need for positive government action to promote the general welfare, Williams returned to Richmond with a conviction "that it was more important to keep people from getting sick than to make them well after they got sick."[2]

Dr. Williams began to transform this ideal into reality upon his election to Richmond's Common Council in 1905. During his term as councilman he pressed successfully for the creation of a city health department. He was especially interested in obtaining a public hospital separate from the almshouse, believing that it was Richmond's duty to provide the indigent with a free hospital, staffed by volunteer doctors and nurses.[3] Because it had become increasingly clear that crowded cities invited the rapid spread of contagious diseases, Williams also felt it imperative that the local governing body maintain a safe public water supply and adequate sewer facilities.

With passage of the greatly strengthened public health bill advocated by Governor Claude Swanson in 1908, Williams was appointed Commissioner of Health for the Commonwealth, a post he held continuously under six succeeding governors until his death in 1931. Williams' tenure as commissioner was as fruitful as it was long. Through his efforts, the Catawba Sanitorium for the treatment of tubercular patients was established. Reflecting his strong belief in the value of educating the public about methods to promote good health, the state health department issued a series of free bulletins on such important topics as the treatment of contagious diseases, protecting safe water supplies, constructing privies so as to prevent the spread of germs, and proper prenatal care, as well as instructional material for school children encouraging the development of good health habits. Williams not only believed in state intervention for the control of communicable diseases and for the protection of water and waste water, but he also felt it was the province of government to provide care and assistance for children with physical defects. His philosophy, which was in tune with progressive thinking of the time, stressed that while delivery of health care to individuals must be left up to the private medical community, the state had the major responsibility for overseeing the general well-being of its citizens. According to his obituary in the Richmond Times-Dispatch, he won his nationwide reputation in the public health field as a pioneer in the application of Scientific methods of preventive medicine to the improvement of public hygiene.[4] It is a testament to his stature that the Surgeon General of the United States served as a pallbearer at his funeral.

Throughout the period of his active professional life, Dr. and Mrs. Williams continued to reside at Holly Lawn. Its convenient location, commodious rooms, and beautiful, park-like atmosphere combined to make it an ideal place to raise a family of eight children. Accenting his devotion to home and family, his biographer in The Encyclopedia of Virginia Biography declares that he was "emphatically a home man; his greatest enjoyment being found there," [5] a portrait that is preserved even more vividly in his family's correspondence. His sister Maria (Mrs. Lewis C. Williams) recalls a special Christmas when Dr. Williams and his family decided to forego gifts in order to prepare anonymously a Christmas feast with presents and a tree for a poor family in the neighborhood. She writes, "a happier family never gathered around a breakfast table than the group of Ennion Williamses on that Christmas morning."[6]

In 1950 Mrs. Ennion Williams sold Holly Lawn to Mr. Graham Pembroke, whose family resided there until 1966. While the house today serves as the headquarters and library of the Richmond Council of Garden Clubs, who purchased it in 1969 and added the present auditorium wing in 1973, it remains in its setting of large oak and holly trees an appropriate symbol for the man whom Virginius Dabney has called "one of the most dedicated public servants in Virginia history."[7]

_____, "Legitimate Boundaries of Public Health Activities." Paper presented at the 56th Meeting of the Medical Society of Virginia, October 14-16, 1925.