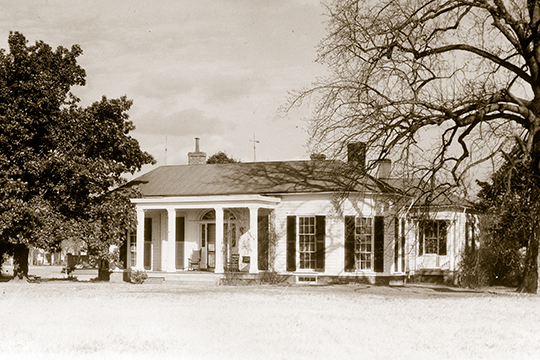 When John Wood mapped Chesterfield County in 1820, the land area of present-day Colonial Heights, between Swift Creek and the Appomattox River, was criss-crossed with a network of roads. A grid of blocks and streets marked the village of Pocahontas (laid out in 1752) shown on the east side of the bridge to Petersburg. At the bridge, Conduit Road (then Conjuror's Neck Road) and the Boulevard (then the "Turnpike Road" between Manchester and Petersburg) converged. Several plantations occupied the expansive "heights" overlooking Petersburg and the Appomattox River. From Conjurer's Neck, extending south and east along the Appomattox River were plantations associated with Kennon (Brick) House, Roslyn, Violet Bank, Oak Hill, Mount Pleasant, and Ellerslie.

Development on the north bank of the Appomattox River was dwarfed by the growth of Petersburg. Civil War-era maps showed that while the north bank was served by several roads and the Richmond & Petersburg Railroad, Petersburg was connected to four major railroad lines, numerous roads, and a canal. In 1888, when LaPrade published a Map of Chesterfield County, what would become Colonial Heights encompassed several "shops" and numerous plantations. LaPrade depicted Violet Bank (for which an adjacent neighborhood was named), Oak Hill, Lynch, Wakefield, Brown, Andrews, Whitehead, Hankins and a couple dozen other unnamed farms.

The birth of the American suburb was influenced by the "White City," a showcase designed by Frederick Law Olmstead for the World's Fair Columbian Exposition of 1893. The emphasis on the classical orders of architecture, orderly planning, and cleanliness appealed to the expanding and increasingly prosperous American middle class. By the late-nineteenth century, American cities were considered overcrowded, dirty, and noisy. In response to a nationwide desire to live in a clean, healthy environment, families looked to outlying "green" areas that were increasingly accessible through improvements in transportation. Early twentieth-century suburbs were platted, subdivided and built according to a plan and laid out in accordance with specific design principles.