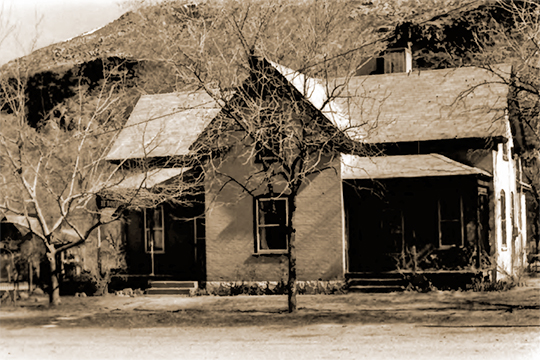 The Hurricane Historic District was listed on the National Register of Historic Places in 1995. Portions of the content of this web page were adapted from a copy of the original nomination document. [‡]

Early pioneers had occupied the region for many years before Hurricane was established. The nearby Virgin River valley, settled by Mormons in 1862, had become heavily overstocked and overgrazed by the late 19th century. Because most natural vegetation had been destroyed, spring rains and thaws created severe agricultural erosion problems for residents of the valley. Intense population growth in the 1870's and 1880's placed additional strain on available lands. By 1890, residents of the valley were desperate for additional agricultural property. They wanted to remain close to their families in Virgin, and looked to the Hurricane bench as a possibility for expansion. They believed the soil was highly fertile and would support crops if the land could be irrigated.

After several years of feasibility studies by various investors, an elaborate canal was built at the turn of the century. Over the first nine years of the project, few original stockholders remained. Financial difficulties troubled the enterprise, and it was near total failure in 1902. James Jepson, president of the Hurricane Canal Company, successfully lobbied officials at the Church of Jesus Christ of Latter Day Saints (Mormon Church) headquarters in Salt Lake City for intervention. They invested $5,000 into the project, which provided the needed capital to complete the canal. With irrigation underway, Hurricane quickly became known by locals as "Utah's Fruit Basket" renowned for its abundant vineyards, fruits, and nut orchards.

When more than 100 people gathered for a rally in August of 1904 to watch water flow into their new homeland, a story was told of an 1865 incident involving Mormon church leader Erastus Snow. Snow was traveling through the area when a sudden gust of wind blew the top off of his buggy. He exclaimed, "My, that was a hurricane! We'll call this Hurricane hill." The people at the rally cheered and decided to name their new town "Hurricane" (pronounced "Hurricun" by locals). Ironically, the area boasts of a mild climate throughout the year.

The town was surveyed in 1896, but the first permanent structures were not built until 1906. Earlier town residents lived in tents, dugouts, or granaries while they built permanent homes; few of these early structures remain.

Although Hurricane was founded several years later than most Utah communities, the town follows a tradition of early Mormon settlements, utilizing the characteristic layout of carefully planned, gridded streets. Agrarian families (mostly Mormon), settled on 1.25 acre plots that were assigned to them in return for investment in the Hurricane Canal Project. The Hurricane Canal Company assigned lots and approved building activity for the town, but retained title to all property until the mid-1910's. The earliest permanent homes were located on corners, with the central portion of the blocks reserved for gardens, outbuildings, and small livestock. A number of these early agricultural structures remain. In addition to the residential lots, each investor received 20 acres of farmland outside the town.

Early families built houses of frame or brick, in Victorian or Bungalow styles. Few buildings were fashioned with ornate embellishment. The early residents of Hurricane adopted scaled-down versions of the contemporary architectural styles in Utah. A typical Hurricane adaptation to the Victorian house appears as a simple cross-wing plan, with modest wood porch and minor trim.

In response to flourishing agricultural growth, rapid commercial and economic expansion swept the area in the years soon after completion of the Hurricane Canal. Visitors to the area commented in 1909, "Hurricane, that thrifty new settlement, surely has made great progress during the year in building new homes, school house, hall and planting out thousands of fruit trees and vines." The first local brick was produced in 1908. By 1913, Hurricane was furnished with four mercantile stores, an ice supply operation, a new planing mill, and long distance telephone service. Hurricane residents could buy food, fabric, hardware, building materials, and even caskets from Petty, DeMille, and Company, who boasted of having a "fine new building...the largest mercantile in the county." In 1914, William Petty brought a movie theater to Hurricane, which was powered by natural gas. Three hotels were in existence by 1915, all of which were operated from private homes. That same year, Bert Woodbury opened an ice cream parlor, and Petty, DeMille, and Company installed the first automobile gasoline tank in front of their store on the corner of State and Main Streets. By 1916, Hurricane had a population of 750, with "substantial stores, a public school, flour mill, and several long distance telephone connections." The first automobile garage and service station opened in 1920, and a bank was completed in 1922. Almost all of these early businesses operated within the boundaries of the proposed Hurricane Historic District; many of these buildings still stand.

Hurricane residents received confirmation of their newfound permanent status in 1913, when Dr. H.H. Wilkinson and his wife moved to town. Prior to this, all medical services were rendered by Myra H. Lemmon, a nurse and midwife. The H.H. Wilkinson House is located at the south end of the district, at 20 East 400 South.

Public improvement projects accompanied residential and commercial growth in Hurricane, especially after its incorporation in 1914. In 1907, Hurricane hired two teachers. The first local post office was established (c. 1907) by J.L. and Mary Workman, and a social hall (demolished) was built in 1908. The Hurricane Canal Company announced plans for an electric generating plant in October of 1915, hoping to have the town "lit up for Christmas." Gravel street improvements also occurred in 1915. Hurricane residents installed a drinking water system in 1918, the same year a new school building (demolished) was completed for $32,000, enthusiastically financed through a town bond issue. Public sewers were first introduced in 1930. New Deal projects of the 1930's brought about a second wave of public building activity. A new twelve-room schoolhouse was completed in 1935, and a city hall/library was built in 1938.

Characterized by a single road leading into and out of town, Hurricane was known as the "dead end street town" by residents of surrounding communities for many years. Hurricane residents, however, saw the potential economic value they could generate through tourism if a strategic highway was built that placed Hurricane on the major thoroughfare between the city of St. George, Zion National Park, and the Grand Canyon. For many years, town residents fervently petitioned the Utah State Legislature to build such a road. This request was finally honored as a Utah Works Progress Administration project in 1937, when a road was completed that linked Hurricane to the surrounding area. Since the completion of this road, consistent growth has occurred in the area surrounding the Hurricane Historic District. Today, Hurricane is experiencing intense growth pressure due to its proximity to St. George, one of the fastest growing communities in Utah. The area attracts retirees and others who are drawn to the mild climate and affordable cost of living. Current residents who are employed generally work in nearby St. George.

The Hurricane Historic District is an important historical resource because it represents the settlement and development of Hurricane, Utah. The district is locally significant because the buildings reflect the architectural and historical development of the town. The residences, commercial buildings, institutional structures, and outbuildings within the district provide a complete representation of a wide range of architectural styles and plans popular in the local region between 1900-1940.