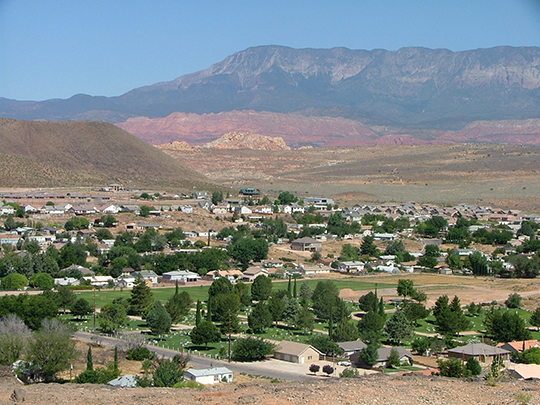 The City of Hurricane was incorporated in 1914.

The history of Hurricane [1] begins with water. The surrounding communities were losing their land to floods and needed an area to grow and develop. The citizens of these communities formed a group to construct a nine mile long canal along the side of the Virgin River canyon and along the Hurricane Cliffs to provide water for the development of a new community. The community would benefit from the fertile soil on the bench far above the seasonal floods of the Virgin River. It took some thirteen years and many personal hardships and sacrifices to accomplish this purpose. Beginning in 1909 to the late 1960's Hurricane was a farming community with fruit orchards, hay, grain, and row crops. The population ranged from 1200 to 1500 until the 1970's. From 1970 to the 2000 there was a dramatic increase in population to approximately 8000 people. By 2010 the population had reached 14,000 and continues to expand, if at a slower pace.