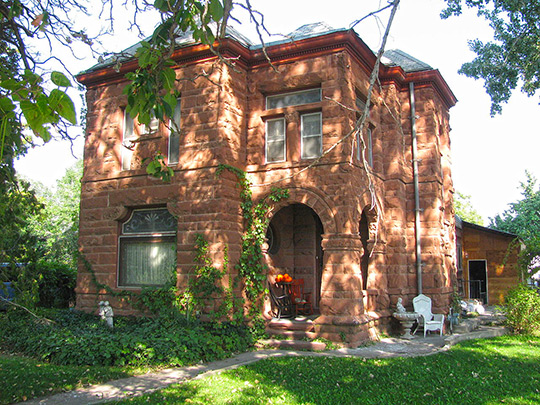 The Payson town plat was based on the grid-iron model of town planning used first used in Salt Lake City by Brigham Young, President of the Church of Jesus Christ of Latter-day Saints (LDS or Mormon Church), and later implemented throughout the Intermountain West. Mormon town planning was based on the belief that the community's social, cultural and educational development would be better served by concentrating the residences within the town site with farming in the outlying acreage. The original settlement of Payson occurred in 1850 with the construction of a pioneer fort encompassing the area between today's Utah Avenue, 200 East, 200 West and approximately 360 North (demolished circa 1865). By 1866 when the official town map was drawn, the early settlers had already built dozens of residences within and outside the area of the fort. The result was an upside-down L-shaped town plat with irregular shaped blocks both in width and length. Of all the early settlements in Utah based on the typical Mormon grid-iron plan, the block and street pattern of Payson City is the most asymmetrical and appears almost random. The smaller blocks are located in the vicinity of the early fort and later business district. The blocks become larger and semi-rural farther away from the town center.

The intersection of Main Street and Utah Avenue is the zero point for addresses in Payson. The original and current north-south transportation corridor through town was the State Road, today's Main Street. In 1935, the State Road was re-routed from Main to 100 West at 100 North to avoid the compact business district on Main between 100 North and 100 South (now a one-way street). The slightly curving road at the juncture is the only deviation from the grid-iron plan. The main routes to the west were Utah Avenue and 400 North. First North (100 North) eventually became the main route to the east, but in the early twentieth century was the route of the Salt Lake & Utah Railroad. Second South (200 South) was originally known as East and West Jog Streets with a "jog" at Main Street. The current street names were in use by the 1930s. While the blocks differ in size, the streets are a fairly uniform width of four rods (66 feet).

For the first fifty years of Payson's history, residential infill within the original plat was slow and steady, and concentrated near the area of the old fort. As is common in most Utah towns, the oldest homes (settlement and Victorian-era) are located at the corners of the blocks. Commercial and light industrial activity occurred near the business district. In the first half of the twentieth century, division of the lots and residential infill dramatically increased and spread out from the town center, especially along Main Street and west Utah Avenue. Sporadic residential construction occurred along the transportation corridors between the orchards, fields, and pastures, as some farmers moved onto their land. By the mid-twentieth century, Payson was connected to the surrounding towns by paved highways and commuter rail. Until 1946, the town was the southern terminus of an inter-urban electric streetcar along the Wasatch Front. In the second half of the twentieth century, rural Payson saw only a trickle of the post-World War II suburban building boom. The first subdivision plats was filed until the early 1970s. The Interstate 15 freeway was constructed in 1967, sheering off a portion of the northwest corner of the town plat. In the last quarter of the twentieth century, Payson, along with other southern Utah County towns, is in the process of transforming into a viable bedroom community for the Orem-Provo metropolitan area with new subdivisions dotting the previously agricultural lands outside of the historic town plat. Infill has increased and today there are only a handful of vacant lots within the town site.