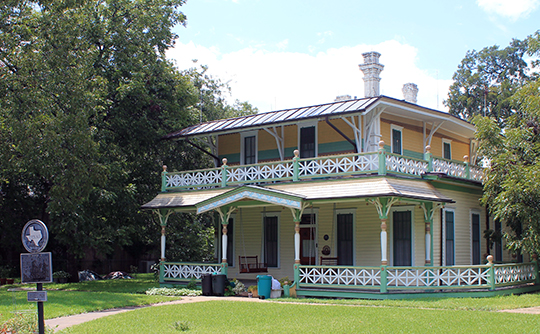 The Shadow Lawn Historic District‡ was listed on the National Register of Historic Places in 1990.

The Shadow Lawn Historic District encompasses a small grouping of houses along the 3800 blocks of Avenue G, Avenue H and Duval Street built during the 1920s and 1930s. The District is comprised of Blocks 36 and 37 of the original Hyde Park Addition and additional land replatted by Monroe M. Shipe in the early 20th century. The District includes a high concentration of houses with Tudor Revival detailing. A few contributing resources feature Bungalow detailing, while several modern non-contributing properties from the 1940s and 1950s round out the neighborhood fabric. Generally found in the northern section, these properties have a minimal impact on the District's overall historic character as they feature setbacks and materials which are compatible with historic buildings constructed in the District before 1941. Of the 41 resources in Shadow Lawn, 25 are classified as contributing to the historic character of the District.

The history of Shadow Lawn is closely linked to the development of Hyde Park. A 1910 map of Austin designates land adjacent to the Hyde Park Addition on the south as the Tinsley Tract. The tract was subsequently developed as the Shadow Lawn Addition by Monroe M. Shipe. Although a plat for the new Addition was not filed until 1922, the area was known as Shadow Lawn by 1917. Austin, Texas: City of the Violet Crown, a promotional booklet published that year, features a photograph of the 3900 block of Avenue G designated as "Shadow Lawn." The photograph reveals undeveloped lots lined with uniformly placed street trees and was likely published as to help market the new development.

The principal developer of Hyde Park, Shipe acquired the Tinsley Tract (roughly including the 3800 blocks of Avenues F, G and H, and the west side of Duval Street) with an eye to developing the area surrounding his own home. Making an agreement with property owners in Blocks 36 and 37 of the original Hyde Park Addition, he resubdivided the tract as the Shadow Lawn Addition, filing the plat at the Office of the Travis County Clerk on January 23, 1922.

The portion of Shadow Lawn within the Historic District was not intensively developed until the late 1920s. Maps published in 1921 by the Sanborn Map Co. show the area within the District to be completely unimproved. City directories do not include a listing for any address in the District until 1929. The first residence in the District was built at 3810 Duval, on a street that became a major artery as Austin grew northward in the 1920s.

The most intense development occurred in the District during the 1930s. The 1935 Sanborn map shows the building footprints of nine dwellings, including four on Avenue G, three on Avenue H and two on Duval Street. City directories reveal that most of these houses were owner-occupied by professionals from the public and private sectors. Perhaps as a symbol of their economic stability in an age of uncertain times, they chose brick-veneer exteriors to contrast the wood cladding of most residences in surrounding areas.

The pace of development was fairly slow and several empty lots remained in the District in 1941, the eve of America's involvement in World War II. With the resumption of residential construction at the war's conclusion, several new houses were built in the area during the late 1940s and early 1950s. Since that time, few changes have occurred within the District's confines. Most houses stand virtually unaltered and are still occupied by their owners. Shadow Lawn's significance stems from the architecture of its houses. The District features a number of dwellings with modest Tudor Revival detailing characteristic of historicist "cottage" bungalows built in the 1930s. The dominance of this architectural form is an important feature that distinguishes the District from nearby housing clusters. No other area in the northern suburbs of Austin contains as high a concentration of Tudor Revival dwellings. Unlike the bungalows in the nearby Hyde Park Historic District, these houses utilized more expensive masonry veneer rather than cheaper wood siding.

Although the Tudor Revival style exerted the greatest influence on Shadow Lawn's architectural character, three examples of Bungalow architecture are found within the District. The house at 3810 Duval is particularly noteworthy because of its broad frieze and fine craftsmanship.