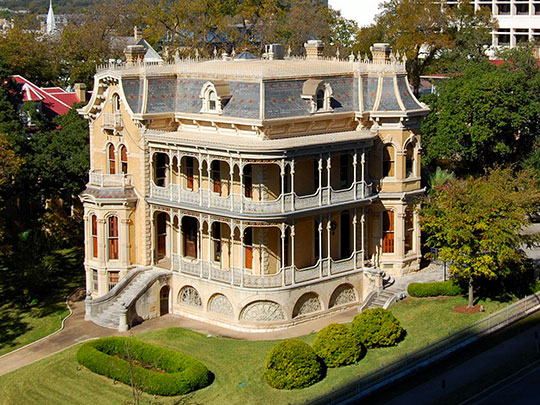 The John Bremond House [1] is one of six residences located on the same city block and built either by a Bremond or Robinson, prominent Austin businessmen of the 19th century. This block was a neighborhood in itself with a common area in the center reserved for a playground for the children of the related families. Of these six residences, all but one were designed and built by the Austin Contractor, George Fiegel. The tract is still known as "The Bremond Block."

The house is significant architecturally because it is an excellent example of the elaborate late Victorian style with its adaptation of classic and European forms and details. It was reputed to have the first indoor bathrooms in Austin.

The Bremond and Robinson families arrived in Texas at an early date. John Bremond, Sr., wife Elizabeth and twelve children came to Austin from Philadelphia in 1846. In 1851, the John Robinson family arrived from Little Rock, Arkansas.

Eugene built the first Bremond House on the "Bremond Block" at the southwest corner. John Bremond followed some twenty-four years later with the house at the southeast corner. The other three family residences followed shortly thereafter to complete the block.

George Fiegel came to Austin from New Orleans in 1873 at the age of twenty one. He quickly learned the building trade and became a dependable friend of certain prominent Austin families—the Hirshfelds, Hancocks, Robinsons and Bremonds among others. He was commissioned for many building jobs within those family groups. He was self educated, and depended upon architectural books for his designs. There was never more than a verbal contract with his clients for his services which often included the total job from design concept to working drawings to construction and even maintenance.

Although the house and property have changed hands several times since the death of John Bremond, they remain today largely unaltered. Fred W. Adams and wife Mattie G. sold the property in December 1953 to the Austin YMCA. Since that time several interior changes have been made.

The basement has been substantially altered to accommodate showers and health facilities for the Y's Health Club. Some original trim and doors remain. The original heating has been replaced.

In the upper floors there is little of significance except the stair hall skylight has been altered. A large octagonal skylight was removed from the second story floor and the opening covered. The skylight was several feet high and was a metal frame with colored glass panels. Several room partitions in the attic have been removed or relocated.