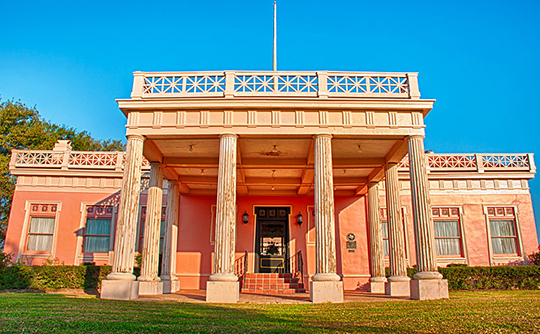 During the late summer of 1895, Stilwell made his first trip to Sabine Pass. Among his traveling companions was Robert Gillham, the company engineer employed in July, 1895 to study the feasibility of locating deep-water facilities in the vicinity of Sabine Lake. Unimpressed by the terrain at Sabine Pass, Stilwell was worried by the fact that most of the land around Sabine Pass was owned by two New York bankers, Luther and Herman Kountze, who were asking a price that he was unwilling to pay. More important, Gillham's reports convinced Stilwell that the site for his railroad terminal, port facilities, and future town must be located inland. Even though the government had dredged a twenty-four foot deep channel through the Pass, Gillham ruled it out as a possible site due to the danger of high tides, the presence of a destructive sea worm, the teredo, and the unattractiveness of the place for promoting a townsite. Gillham concluded that an inland port connected with the Gulf by a canal would be better than Sabine Pass. On his return trip, Stilwell selected a site along the western shore of Sabine Lake near the mouth of Taylor's Bayou.

The Port Arthur Townsite and Land Company, a subsidiary of the K. P. & G., publicized the new town of Port Arthur throughout the country. Advertised extensively in newspapers and pamphlets, the townsite attracted settlers from as far away as Kansas, Iowa, and Minnesota. New arrivals found a sprawling tent city, complete with a community dining hall and smaller tents for sleeping. The main thoroughfare, Procter Street, was nothing more than a dirt lane defined by plowed furrows for drainage.

To induce businessmen and settlers to visit the town, the railroad built a spacious three story hotel with seventy rooms surrounded by a tropical garden, The Hotel Sabine built in 1896 offered newcomers a welcomed-haven from the hordes of mosquitoes that descended upon those living in tents. Early social and recreational life of Port Arthur focused on the Pleasure Pier, a two thousand foot pier built over the lake. Its open-air restaurant specialized in serving the abundant fish and oysters found nearby. Other entertainment features included bars, bowling alleys, shooting galleries, and a landing for sailboats. The Natatorium became another popular place where bathers could swim in waters fed by artesian wells. On April 5, 1897, the first of a series of excursion trains left Kansas City for Port Arthur; the passengers furnished with a free fare were entertained lavishly with orchestras and a menu featuring quail and strawberries.