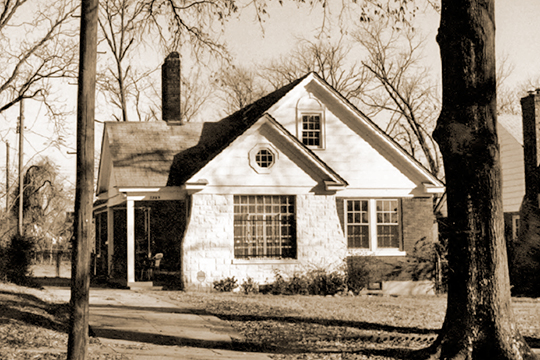 The Shadowlawn Historic District was listed on the National Register of Historic Places in 1995. Portions of the content of this web page were adapted from a copy of the original nomination document. [‡]

The Shadowlawn Historic District is a small planned subdivision containing one hundred and thirty-four principal dwellings, located in the southwestern portion of the City of Memphis. The district includes the historic portion of the Chandler's Shadowlawn Subdivision which was developed between 1924 and the outbreak of World War Two. The District includes properties facing South Wellington Street from South Parkway south nearly to East Person Street; properties facing Shadowlawn Boulevard from South Parkway south to Essex Street, and three partial blocks of structures facing South Parkway that flank Shadowlawn and Wellington on the east and west.

With but one exception, all of the buildings in the district remain in residential use. Like many neighborhoods in Memphis built during the 1920s, house types in the district are mostly bungalows, with fewer English cottages and Capes scattered throughout the district. Architectural styles found in the district include the Craftsman. Colonial Revival, Tudor Revival, and Minimal Traditional styles.

There are recognizable elements of "pattern architecture" or "plan-book architecture" identifiable in the district, particularly among some of the number of bungalows present. Similarities can be found in the massing and organization of some of these structures which suggest common floor plans, though each was given different design elements for an individual expressions.

The consistent architectural qualities of structures in the Shadowlawn Historic District are largely the a result of the pervasive control of William C. Chandler (1885-1962), its developer and builder. The plat for the Chandler's Subdivision was approved by the Memphis City Planning Commission on April 14 of 1924, containing, in all, one hundred and sixty lots. Chandler developed speculative houses in the subdivision in phases over time, starting a new phase as the previously-built section filled up with new home owners. His market for the Shadowlawn subdivision was targeted toward the middle class, particularly the families of employees in the industrial and commercial concerns located in the general area surrounding the subdivision. Housing existing in this area at the time of the development of the Shadowlawn subdivision had been built a generation before with the first wave of industrial development in South Memphis, such as the development of the Ford assembly plant in 1924 at South Parkway and Riverside Drive. The break-up of the Kerr landholdings in South Memphis in the early 1920s opened new areas for residential and industrial development. Chandler was able to meet the demand of the growing work force in this area of Memphis by offering homes with amenities that appealed to the new middle class, like "hardwood floors, built-in cabinets, garage and driveway" (Commercial Appeal, September 12, 1926). The $6,000.00 price tag for the majority of the houses in the neighborhood was in reach for most of the middle class.

The pattern of development in the subdivision is revealed by city directory listings for the 1920s. The 1926 city directory shows that there were but sixteen occupied residences in the neighborhood; there were no "vacant" residences noted that were awaiting occupation. Most of the occupied properties were located in the first blocks of South Wellington and Shadowlawn immediately south of South Parkway. By 1928, however, there were fifty-six occupied dwellings, and twenty-nine developed dwellings noted as "vacant." On Wellington, the pattern of development had stretched three blocks to the south nearly to the southern edge of the district (though there were still undeveloped lots lying between ones improved with houses); the majority of two blocks of Shadowlawn had also been developed. The South Parkway frontage of the district was nearing full development by 1928, and was completely built-out by 1932 (Polk 1926, 1928, 1932).

During the Depression years. Chandler chose not to open up the final, undeveloped phase of the subdivision, concentrating instead on focusing the development of new houses on lots previously left vacant. For this reason, the southernmost portion of the original subdivision, that of Shadowlawn Boulevard between Essex and Person streets, was not opened for development until ca. 1950. This last, non-historic phase of the original Shadowlawn subdivision is not included within the boundaries of this district.

William Chandler's intent for the Shadowlawn subdivision was to appeal to the middle class worker of South Memphis, and it would appear that the rapid sale of his speculatively-developed houses proved his assumption correct. A random sampling of the occupations of residents in 1928 and 1932 confirms that the neighborhood appealed to the working middle class, including clerks, mechanics, carpenters, cashiers, office managers and factory workers. However, the same sample also reveals that the those employed by the Illinois Central Railroad. Of the twenty one residents sampled, twelve were employed in railroad-related professions, including engineers, conductors and electricians (Polk 1928, 1932). The proximity of the Illinois Central's main switching yards nearby the district likely added great appeal for railroad employees in purchasing homes in Shadowlawn.

The housing developed in Shadowlawn by William C. Chandler was solidly-based in the needs of the middle-class market during the 1920s. By the time that the Shadowlawn subdivision opened in 1924-25, the bungalow was firmly entrenched as the home of preference for the expanding middle class, though the small English cottage was growing as an attractive alternative. The survey of the district revealed that there are clearly several different groups of houses which share common house plans, which can be expected in speculatively-developed subdivisions. Even though some houses in Shadowlawn may share a particular house plan in common, their outward appearances are not identical— each is provided with individual treatments of their detailing (differences in window sash configuration, porch posts, door style, gable end treatment, etc.) to mask their common plan. Unfortunately, the origin of Chandler's "stock" plans is not known.

There are also a number of houses within the Shadowlawn district which share no common plan with any other structure in the neighborhood. The fact that there are "unique" variations of bungalows, English cottages, Capes, etc. shows that not all of Chandler's houses in Shadowlawn were built for speculative purchase by a future home buyer. Instead, it appears that at least some of these houses were custom developed to appeal to the tastes of a specific home buyer, perhaps with Chandler serving only as general contractor in seeing the house built to completion.

Shadowlawn was not the first nor last of the housing subdivisions developed by William C. Chandler. Chandler began his career in real estate development ca. 1912 and continued active until the late 1950s (his company, the Chandler and Chandler Real Estate Company, is still run by his descendants today). Chandler began by constructing individual homes, and later touted a particular style of bungalow as the so-called "Built-Rite" home. Though little more than a marketing ploy on his part, Chandler's bungalows catered to the demands of the middle class and the popularity of the bungalow. Rather than a specific plan or design, the "Built-Rite" bungalow was, instead, more of a package of elements that could be purchased at an affordable cost. Chandler packaged the "Built-Rite" bungalow as a brick-veneered house with many amenities as standard elements, steam heat, built-in cabinets, hardwood floors among them, all for a price within the budget of the middle class. A garage and a concrete driveway were standard site improvements for each house (Johnson 1994:2-5). The houses of Shadowlawn do not appear to have been marketed specifically as "Built-Rite" houses, but do meet these general standards.

Among Chandler's earlier projects were smaller-scale developments like the Cummings Subdivision of 1917, a thirty-two houses on Azalia Street, and twenty-two bungalows on Forrest Avenue in 1920. The Shadowlawn subdivision was, by contrast, Chandler's truly first large-scale development project, and while there are bungalows which Chandler may have sold as "Built-Rite" properties, it was in Shadowlawn that Chandler first experimented with house forms other than the Craftsman Bungalow. Another notable pre-World War Two project of Chandler's was the Prescott Circle Subdivision in the area of Carnes and Prescott streets, which Chandler developed beginning in 1938. In this development, Chandler retained the services of the noted local architect, J. Frazier Smith, to design the subdivision plan and to develop stock plans for the Minimal Traditional-styled houses built there.

The Shadowlawn is an unusual and well-preserved example of a suburb from the 1920s and 1930s, which retains good examples of Craftsman bungalows, English cottages, Capes and other forms of middle class housing stock. Its history of development as a largely speculative subdivision, apparently built entirely under the direction and guidance of William Cullen Chandler, provides the district with a rare sense of architectural continuity, and diversity.