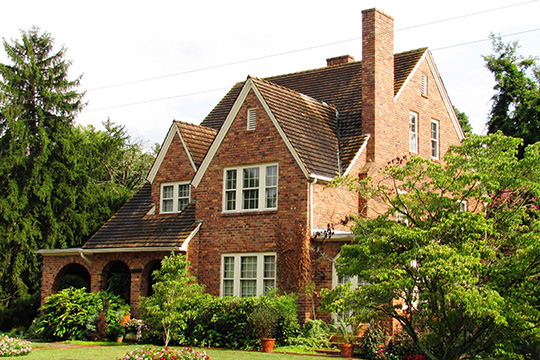 The Island Home Park Historic District was listed on the National Register of Historic Places in 1995. Portions of the content of this web page were adapted from a copy of the original nomination document. [‡]

The Island Home Park Historic District is a five and one-half block streetcar suburb neighborhood in south Knoxville. The district is composed of properties in an area along Island Home Boulevard (divided by a median strip where the streetcar ran), Spence Place, Fisher Place and Maplewood Drive.

The houses in the district are frame and one to two stories tall. The district contains Craftsman Bungalow dwellings, sometimes influenced by Tudor Revival, Neoclassical and Colonial Revival architectural details. Minimal Traditional styles are also found in the district.

The neighborhood was named for the model farm and second home of Perez Dickinson. Mr. Dickinson was a merchant, banker and educator, prominent in Knoxville and Knox County. He owned Island Home from 1875 to approximately 1899, when the Island Home Park Company took control of the property. Prior to that time, Mr. Dickinson, who maintained a large, elegant home in downtown Knoxville as his primary residence, used Island Home as a summer cottage, a guest residence, and an agricultural and horticultural center. Mr. Dickinson's house, although extensively modified from its original Italianate design, still exists on the grounds of the Tennessee School for the Deaf located at the eastern boundary of the subdivision. The Island Home Park Historic District lies on land that formed the front approach to the grounds, and Island Home Boulevard follows the path established by the original drive to Mr. Dickinson's home.

Mr. Dickinson is reported to have been very gracious in sharing Island Home with the community. He purchased the land from Colonel Thomas L. Spence (for whom Spence Place, a street in the subdivision, is named) in 1869. He also purchased an adjacent island, Williams Island, which now houses Island Home Airport, and was owned by John C. J. Williams. Mr. Dickinson entertained local Knoxvillians, and visiting dignitaries. He encouraged various civic groups and organizations to hold meetings at Island Home, and picnics by Sunday Schools, civic organizations, and the Dickinson Rifles or Dickinson Light Guard, a militia formed by Mr. Dickinson, were common at Island Home. Citizens of Knoxville were accustomed to sharing the hospitality Mr. Dickenson extended; this affection extended to the new Island Home Park Subdivision.

The citizens of Knoxville became even more interested in Island Home after the Gay Street Bridge was constructed in 1898. Before the bridge was complete, a trolley company had been granted an easement to install tracks across the Gay Street Bridge. Prior to installation of the trolley, South Knoxville had always been fairly isolated from the developing city on the north side of the Tennessee River.

In 1899, the Island Home Park Company took control of the property located outside the gardens of Perez Dickinson's house. The gateposts were constructed, and Island Home Boulevard and Spence Place were paved. The streetcar line ran in a median on Island Home Boulevard, and rounded curb cuts that allowed the streetcars to cross intersecting streets are still visible. The exact date of development of the residential subdivision is not known. However, houses were apparently not constructed for the first few years of ownership by Island Home Park, until around 1910. It is known that the land was used as a public gathering place, and for picnics, for a number of years before residential development grew up on Spence Place, Maplewood, Fisher Place and Island Home Boulevard.

Island Home Park Subdivision was platted as a streetcar suburb, with long rectangular blocks facing the rail line in the median on Island Home Boulevard. The lots are relatively narrow and deep, and sidewalks can be found parallel to the streets throughout the neighborhood. The early residents of the district were middle class and professional people associated with the prosperous warehousing and industrial economy of early twentieth century Knoxville. The architectural styles in the neighborhood reflect the styles prevalent in the early 1900s, with Craftsman, Bungalow, Tudor Revival and Colonial Revival, as well as Minimal Traditional, being represented. It is the dominance of the Bungalow styling that contributes greatly to the significance of Island Home Park Historic District. Although there are other areas in Knoxville with Bungalows, there is no other area where the Bungalows are this large or elaborate, or where there are this many of them. In addition, the use of cobblestone contributes to their significant character.