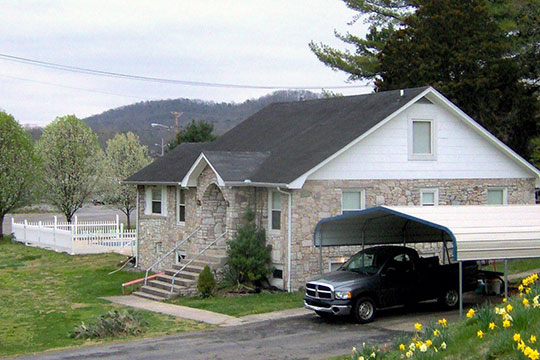 Oak Ridge [1] is situated on Black Oak Ridge, in the ridge and valley system that runs parallel to and west of the Appalachian Mountains. The city is located about sixteen miles west of Knoxville and seven miles south of Clinton, the seat of Anderson County, in the shadow of the Cumberland coal fields. Oak Ridge straddles northern Roane and southern Anderson Counties, with most of the city proper in Anderson County. The city is situated between parallel ridges with the Cumberland Mountains to the west and the Clinch River to the east and south. The topography is characterized by steep ridges bordering the Clinch River Basin. The elevation is 775 feet at river level and 1205 feet at the ridge line that marks the western limit of the town. Walden's Ridge, slightly northwest of Oak Ridge, is the dominant western boundary of the Clinch River basin.

Natural resources in the area include an abundance of streams in addition to the Clinch River. Some river-bottom land was cultivated by early settlers, but the terrain was too mountainous to support large-scale farming. The rugged ridges provided natural barriers between early settlements. Much of the region's farmland was inundated by Norris Lake and Watts Bar Lake when the dams were built during the Depression. Coal is the region's most important and most abundant natural resource. The western third of Anderson County lies in the Cumberland coal fields.

The Manhattan Project townsite and plants were built on nearly 59,000 acres of land in the narrow valleys formed by Black Oak Ridge, Pine Ridge, Chestnut Ridge, and Haw Ridge. The city limits today contain all 59,000 acres that include the townsite and the plant areas. While most of the city of Oak Ridge is in Anderson County, a large part of the government holdings are in Roane County. Seventy square miles of the original ninety-two are still retained by the U.S. Government. The City of Oak Ridge has grown beyond its original twelve square miles and now comprises twenty-two square miles. The Oak Ridge Turnpike is the major artery going through the city and follows Tennessee Route #61. The Oak Ridge Historic District will include about six square miles (about 3800 acres) of the original townsite. The Woodland-Scarboro Historic District is made up of two post-war neighborhoods and is approximately two square miles in area.

The city of Oak Ridge is comprised of several neighborhoods situated on the east slope of Black Oak Ridge. Newer residential development has occurred in the far west and east sections of the city. Because Oak Ridge was planned to house operating personnel for the Manhattan Project, it retains its predominantly residential character. Natural trees and greenbelts were left undisturbed in accordance with the Army's wishes to create a pleasant and livable town for its wartime employees. Wartime commercial ventures were tightly controlled and were located in planned neighborhood centers throughout the city. Broad commercial development did not occur until after the end of World War II and has been limited to the Oak Ridge Turnpike and Illinois Avenue. The Turnpike was used during the war for access between the plants and the townsite; Illinois Avenue was not constructed until the early 1950s. These two streets have become the major arteries in Oak Ridge.