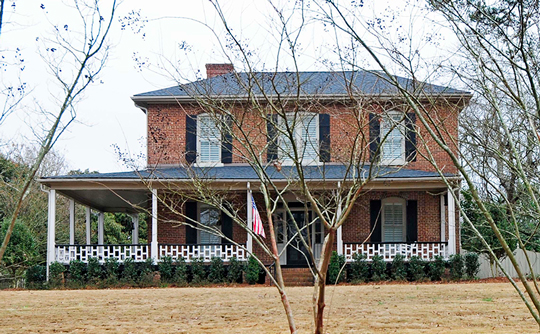 The Mack-Belk House, 119 Banks Street, was listed on the National Register of Historic Places in 1992.

The Mack-Belk House [‡] is a two-story, Victorian-era brick house with a hip roof. There is a one-story hip-roofed porch across the facade and wrapping around a portion of the east elevation. The porch has chamfered posts and a decorative balustrade. The brick is laid in six-to-one common bond. Brickwork includes segmental and jack arches over windows and doors. The front (north) facade consists of three bays, with paired windows in the center bay. The entrance has sidelights and transom. The windows feature four-over-four lights. The east and west elevations have a window on each floor of the main block of the house. There is a side door with transom on the east end within the porch. A one-story rear wing with gable roof extends to the south. This portion predates the main block of the house and represents an earlier residence which dates to about 1861. Also of brick, this wing has irregular window placement. On the southwest section of the house is a newer addition with enclosed porch. There are two interior chimneys which have corbelled caps. On the original rear wing, there is a square corbelled interior chimney with brick recessed panels on either side.

The house has been associated with the Mack and Belk families for about one hundred years. It was occupied by Dr. Edward Mack who was a native of Fort Mill. He was educated at the Fort Mill Academy under his uncle, A. R. Banks, and at Davidson College. He attended Union Theological Seminary and was ordained as a Presbyterian minister. He later taught for a number of years at the Seminary, located in Richmond, Virginia. After his death, the house was owned by his sister, Mrs. Elizabeth Mack Belk. Her husband, Thomas Heath Belk, operated a mercantile store on Fort Mill's Main Street, and was part of the Belk family, which was developing a chain of stores. The house was later owned by their daughter, Hattie Belk Potts and her husband, George Potts. It passed out of the Mack-Belk-Potts family in the 1980s.

The Mack-Belk House, in addition to its significance as an example of Late Victorian architecture, represents a period of rapid growth and development in Fort Mill following the founding of the textile industry in 1887. The house is typical of a number of properties which were enlarged during this period of growth. The Late Victorian architecture has some influences of the Italianate style, including paired windows in the central bay, segmental arches which suggest the window crowns of the Italianate style, wide roof overhangs, and hip roof.