Photo: Homes in the Cato Hill Historic District, Woonsocket, RI. The Historic District was listed on the National Register of Historic Places in 1976. Photographed by User:Magicpiano (own work), 2013, [cc-by-4.0 (creativecommons.org/licenses/by-sa/4.0/deed.en)], via Wikimedia Commons, accessed March, 2016. 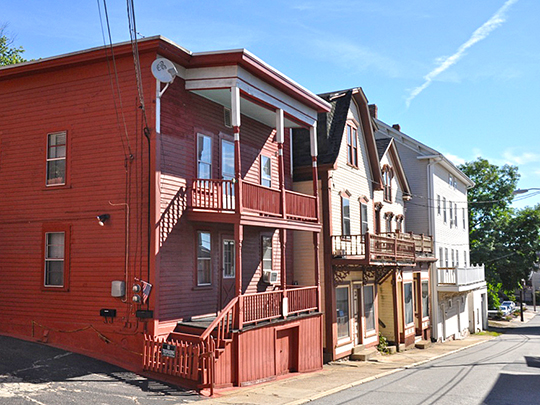 The Cato Hill Historic District was listed on the National Register of Historic Places in 1976. Portions of the content of this web page were adapted from a copy of the original nomination document. [‡]

The Cato Hill Historic District is a well-defined section of an urban working-class neighborhood. Located on a hilltop site in the center of Woonsocket, its outer bounds are defined topographically by steep slopes descending to the commercial/industrial zone along Railroad Street to the south, and the business district on Main Street and Monument Square to the east. Lesser grades descend to Blackstone Street and Arnold Street (both major thoroughfares) on the north and west. The district consists of two rather narrow, crooked streets, Cato and Church, linked by Boyden Street and Clarkin Lane; Holder Lane constitutes a district subsection of the neighborhood.

Cato Hill was laid out in small house lots in about 1840 which, when possible, followed the 50 by 100 foot model standard for urban residential neighborhoods. Almost all lots were occupied by the 1890s. The only significant open space in the area was a cemetery southeast of Cato and Arnold Streets, but this was gone by 1895; 162 and 200 Cato Street now occupy the site. In general, Cato Hill remains densely built up. The density and, more importantly, the scale of the neighborhood has been somewhat eroded by 20th century development at the perimeter along Arnold Street and the northeast end of Church Street. In the heart of the Cato and Church streetscapes, however, there are few "holes." Lacunae formerly occupied by 19th century structures exist between 62 and 96 Cato Street, between 96 and 118 Cato, between 151 and 175 Cato, and between 116-118 and 138-142 Church Street.

Typically, buildings are located close to the street, but the setback from building to building is very irregular. Similarly, though these rectangular, gable-roofed, one-and-a-half and two-and-a-half story structures are alike in shape and size, the orientation of building to street has no uniformity—flank to street, gable to street, even at angle to the street. The present jumbled effect—compounded by the crooked street pattern and changes in grade—was once more structured. Picket fences and trees defined the special continuity of the street corridors and moderated the impact of disparate setbacks and building orientation. Despite these changes, Cato Hill remains a unit visually, and has great vitality as well.

In architectural character, Cato Hill is unpretentious, small-scale and mid-nineteenth century. Fifty-six of the eighty-seven buildings in the area date between c.1840 and c.1875; only ten buildings date from the twentieth century. All nineteenth century structures are of frame construction, originally clapboard clad and trimmed with the simplest late Federal, Greek Revival, Bracketed, or Queen Anne detailing.

The essentials of Greek Revival articulation persisted very late in this neighborhood, however, and most buildings pre-dating 1875 partake of this style. The building stock is all residential and ranges from one-and-a-half story single-family houses to four and six family two-and-a-half story tenements.

The earliest buildings are Greek Revival cottages. Only one, the William Kelley House (ca. 1840) at 132 Cato Street, has a fully developed, if diminutive, temple form facade. There the first story is recessed across the front of the house to create a porch with the gable roof carried over it; the gable is framed with heavy moldings to achieve the look of a classical pediment, and is supported on four slender columns. Originally, all Greek Revival buildings in the area were cased with corner pilasters and wide plank entablatures, and the window and door treatment is equally bold. 113 Church Street (ca. 1863) is a late example of the Greek Revival cottage type.

Cato Hill buildings constructed in the 1860s and early 1870s were by and large basically Greek Revival, but a few showed the influence of the newer, more picturesque aesthetic of the bracketed style. A fine example stands at 77 Church Street, an otherwise plain clapboard affair dressed up with a heavy bracketed entrance hood and busy, dentil-like modillions carried around the roof cornice and across each window architrave. In the late 1870s the Greek Revival mode was abandoned, and new houses, mostly multi-family tenements, displayed bracketed detail sparingly applied. Examples of this fashion stand at 151 Cato Street, 163 Church Street and 65 Boyden Street. The several large, multifamily dwellings put up in the neighborhood during the late 1880s and early 1890s, like 162 Cato Street and 20 Boyden Street, are finished with simple Queen Anne ornamentation.

Cato Hill is an intact residential enclave in the midst of a medium-sized industrial city. It has suffered few new or out-of-scale intrusions, its buildings are in fairly good condition and are reasonably well preserved.

Cato Hill is a representative mid-nineteenth century working class neighborhood of the sort developed in a rather informal fashion by individual property owners who built small houses for themselves or inexpensive tenements to rent out, and peopled by waves of immigrant families drawn to American industrial cities by the opportunity find work. Though poised above Woonsocket's business center, it is remarkably intact. Through its layout and architectural fabric, Cato Hill evokes a sense of place, purpose and history.

The area derives its name from Cato Aldrich, a Black, who bought the property from the Arnold family, seventeenth century founders of the city. The neighborhood's development parallels, chronologically, the growth of Woonsocket as Rhode Island's third largest industrial center. By the 1840s Woonsocket was a rapidly growing community with an economy based on textile manufacturing, and Cato Hill came into being as a convenient center-city neighborhood financially accessible to mill hands and laborers.

Using a series of dated maps as a guide, we can determine the period in which the eighty-seven extant buildings were built and through this data suggest how the area grew. Only one building had been erected in the area before 1838, and most dwellings were constructed between 1838 and 1875: fifteen between 1838 and 1851, five between 1851 and 1862, eighteen between 1862 and 1870, seventeen between 1870 and 1875. Most lots were occupied by 1875 and, consequently, relatively few new buildings went up after that. Twenty buildings were constructed between 1875 and about 1900, some replacing earlier dwellings. In such cases the old house was either demolished or moved to the back of the lot and the new house was put up on the street front. Five of the ten twentieth century buildings in the area are warehouses or garages and are found on or near Arnold Street, an indication of that thoroughfare's automobile-oriented commercial character, established in the last half-century. Clearly, the two significant eras of growth for Cato Hill were the 1840s and the Civil War and post-Civil War period, 1862-1875. Not surprisingly, these were years of major industrial expansion in Woonsocket, and with it, a growth in the working-class population of the city. New workers needed new homes, and this was the impetus for Cato Hill development.

Woonsocket's labor force in the 1840s and 1850s was made up of two groups—old-time Yankees and Irish immigrants. On Cato Hill the Irish predominated. Over half the residents of the area were Irish, employed in the mills, as laborers, or as tradesmen. The industrial expansion of the Civil War period brought in a new group of immigrant workers—French Canadians—and it was they who occupied the new tenements erected in the late 1860s and early 1870s. By the 1880s, Cato Hill was largely a French-Canadian neighborhood. In the early twentieth century a third wave of immigrant industrial workers settled here, altering the ethnic make up of the neighborhood but having little impact on its physical development. Many newly-arrived Central Europeans came to Woonsocket, and a Ukrainian community flourished on Cato Hill. The ward hall built in about 1905 at 168 Church Street to serve the area was later used for many years by the Ukranian-American Veterans Association. In recent years, however, Cato Hill has been losing its distinctive ethnic character.

Cato Hill's dwellings—described by one observer as "just plain, nice old buildings"—convey a sense of stability and utility with which one can readily identify. This vernacular architectural fabric creates an unspectacular, yet pleasing visual context, enlivened by the variety resulting from irregularities of siting and topography. Though individual structures are straightforward in design, the area as a whole is picturesque. Writing in 1842, A. S. Daniels had much the same comment to make concerning the entire city: "Woonsocket, though badly laid out (the buildings being set in all directions and fronting every way), when viewed from the surrounding hills, presents one of the most picturesque and novel scenes imaginable." The scenic potential of most of the rest of Woonsocket is now largely unrealized, but Cato Hill has kept its striking visual integrity.