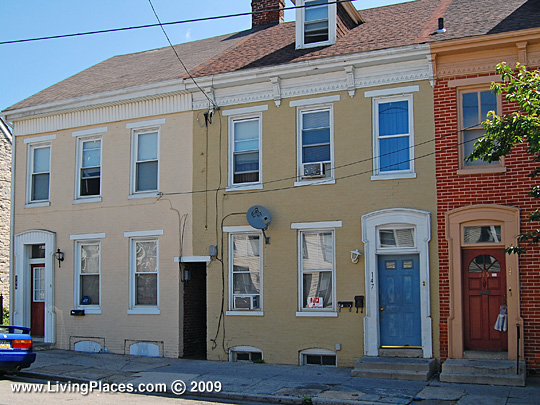 The York Historic District was listed on the National Register of Historic Places in 1979. Portions of the content on this web page were adapted from a copy of the original nomination document. [1]

York Historic District reflects an industrial town whose architecture is predominately from the Victorian period. The center of the district is a retail commercial area with buildings from the late 19th and early 20th centuries. Most residential structures are two and three story, Victorian brick row houses. A predominant feature throughout the district are second story bay windows constructed of wood or cast iron.

The Codorus Creek divides the west end of the district. The district west of the creek is marred by large vacant lots, the result of redevelopment demolition. The remaining blocks within the district particularly east of the Codorus Creek, retain fairly complete facade lines and overall structural density.

The predominant use of buildings is multiple unit residences. Most retail, commercial structures are located around the center of the district. East Market Street is predominately residential Victorian homes converted for professional office space.

Although York's architecture reflects a prosperous 19th century industrial community, its popular historical associations are in the 18th century. York was capitol of the United States from September, 1777 to June, 1778. Congress established York as the capitol after leaving Philadelphia to the approaching British Army.

In 1741 Thomas Cookson, employed by the Penns as a surveyor, was dispatched to lay out a town west of the Susquehanna River. Cookson selected a site on the bank of the Codorus Creek at the intersection of the Monocacy and Patapsco Roads.

In 1754 when York was declared the Seat of York County, the town had approximately 1000 residents and 210 buildings. With the exception of 33 brick and 2 stone houses, all structures were made of log.

In 1777 when the Continental Congress arrived in York the population had increased to roughly 1600 predominately German residents. Records indicate there were about 300 houses and 22 taverns; of these 322 structures only four can be documented as still standing: The Cookes House, The Gates House, The Plough Tavern, and the Friends Meeting House. With the exception of these few restored 18th century structures, the architecture within the district reflects a community prosperous in the mid to late 19th centuries.

Following the Civil War, York's population increased from 11,103 individuals in 1870 to 20,793 individuals in 1890. By 1900, 33,708 persons resided within the City of York. This dramatic population growth in the late 19th century resulted in a demand for both middle class housing and housings for a growing wealthy class. Consequently, many of the earlier houses on both East and West Market Streets were altered or razed for new construction.

Within the district, west of the Codorus Creek, redevelopment demolition has broken the streetscape of several blocks. The commercial district has suffered several major intrusions in the form of 20th century commercial structures.

Overall the district retains its 19th century character particularly along East Market Street. The most visible restoration work has occurred with the use of Victorian townhouses for professional offices.

Historically, the most significant event occurred when York was Capitol of the United States. While in York the Continental Congress signed the treaty between Colonies and France, whereby France supported the Colonies with military and financial assistance. The Articles of Confederation were also introduced during the Congress's period in York. The Gates House and Plough Tavern were popular gathering places of prominent colonial figures.

Architecturally, York's district is Victorian in character and expresses the architecture of the rich as well as those who worked in the prosperous local industries. Its most noteworthy late 19th and early 20th century architect was J. A. Dempwolf.