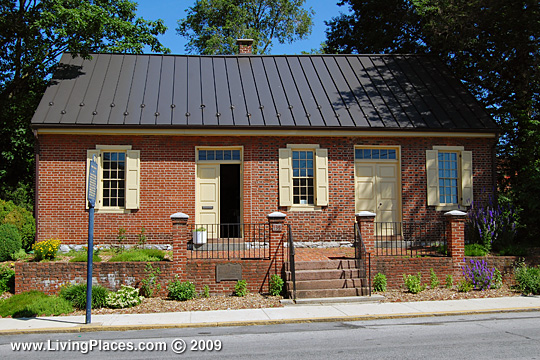 The York Meetinghouse (134 West Philadelphia Street) was listed on the National Register of Historic Places in 1975. Portions of the content on this web page were adapted from a copy of the original nomination document. [1]

The York Meetinghouse was originally constructed in 1766 as a one and one-half story brick building, two bays in width, with a gable roof and side chimney. The structure was symmetrical in appearance with a window on either side of the main entrance. The windows are nine-over-nine, double-hung sash with semi-circular arched, radiating voussoirs above the lintels. The entrance is double-leaf, three-panelled door with five-light transom and also has semi-circular arched, radiating voussoirs above.

The rear facade of the York Meetinghouse also features a window opening on either side of a centre door. In contrast to the panelled shutters on the front, the rear windows have batten shutters. Both rear windows and door have flat-arched radiating voussoirs above.

The east facade of the original structure has two window openings, one off centre at the first floor level, the other in the gable centre.

The main facade of the original York Meetinghouse structure features brick laid in Flemish bond. In contrast, both the rear and east facades feature brick laid in common bond with three rows between rows of headers.

In 1783, a brick addition was attached to the west end of the original meetinghouse, almost doubling its size. The addition is two bays in width with another entrance and window. The window is nine-over-nine, double-hung sash, the door a double-leaf, three-panelled door with five-light transom. Neither opening has radiating voussoirs. Two first floor window openings to the west side have batten shutters with flat-arched radiating voussoirs. The two window openings to the rear both lack voussoirs.

The main facade of the 1783 addition features brick laid in Flemish bond while both the west side and rear have brick laid in common bond with five rows between rows of headers.

The York Meetinghouse, originally constructed in 1766, is the oldest religious building in the City of York. The York Monthly Meeting of the Religious Society of Friends, once one of the largest religious bodies in the city, still holds weekly worship services for its nine members.

As early as 1738, "indulged meetings" held by sanction of monthly meetings, were held to the north of York in nearby Newberry and Warrington townships. When York County was created in 1749 with the county seat located at York, many of the large Quaker population in the area began to conduct business and buy property in town. Permission was soon obtained from Warrington Monthly Meeting to hold an "indulged meeting" in York. By 1764, the York indulged meeting became a meeting for worship but was ordered to remain members of the Newberry preparative meeting, a unit composed of one or more meetings for worship.

By 1766, the members of the congregation had contributed funds toward a meetinghouse. William Willis, a farmer and bricklayer, constructed the building on property deeded to the Society by Nathan Hussey. In 1767, the York preparative meeting was established. In 1773, the western portion of the lot was deeded and in 1783, the western half of the structure was built. By 1786, the York Monthly Meeting was established.